BACK TO ALL NEWS
Currently reading: 2020 Kia Sorento goes on sale priced from £38,845
UP NEXT
New Genesis luxury brand teases 2021 G70 Shooting Brake

Kia’s new-generation Sorento SUV has been priced up in the UK ahead of customer deliveries starting later this year.

Available to order now, priced from £38,845, it’s initially only available with petrol-electric hybrid and diesel powertrains, with a petrol-electric plug-in hybrid due later this year. All are solely four-wheel drive.

Entry-level 2 spec is solely available with the hybrid, which mates a 1.6-litre turbo petrol engine with a 59bhp electric motor and 1.49kWh battery pack, putting power through a six-speed automatic gearbox, for a combined 226bhp and 195lb ft of torque. It promises a 0-60mpg time of 8.7sec and 40.9mpg combined, with CO2 emissions as low as 158g/km. 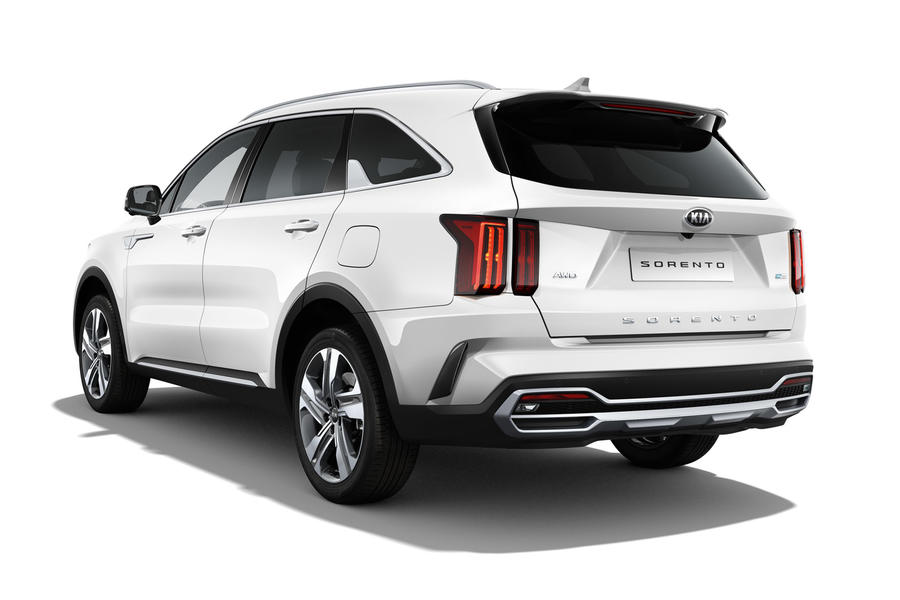 The plug-in hybrid will follow shortly after with 261bhp overall, an 89bhp motor and a 16.6kWh battery.

Standard kit for the base 2 car includes LED front and rear lights, seven seats, a digital instrument display, an 8.0in touchscreen, Android Auto, Apple CarPlay and a substantial suite of active safety systems.

The system uses wide-angle cameras mounted on the door mirrors, which relay a video feed to the SUV's 12.3in digital instrument cluster, briefly replacing the speedometer or tachometer when the driver indicates to change lane when another vehicle is in their blindspot.

Kia claims the system offers a much wider viewing angle than the standard mirrors, improving safety. It will be offered alongside Blind-Spot Collision-Avoidance Assist, which can take intervening action to pull the car back into lane if it thinks a crash will occur. 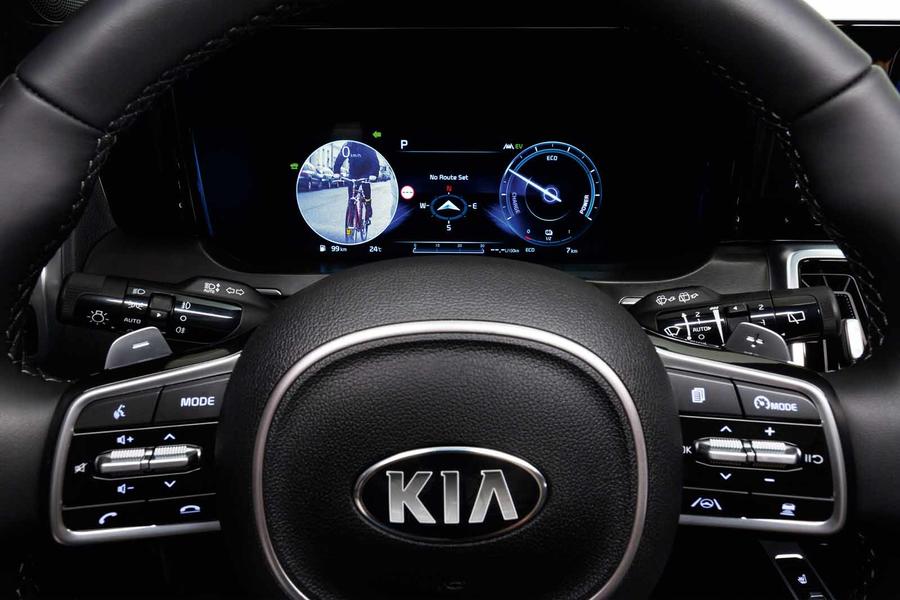 The fourth-generation Sorento is a rival to the Skoda Kodiaq and adopts a design distinctly different from that of its predecessor or any other Kia sold in Europe. This angular styling, which apes that of the larger, US-market Telluride, is likely to be a reflection of its greater sales status in the US than Europe.

The brand's trademark 'tiger nose' grille has been subtly reshaped, and is flanked by a pair of LED headlights, while a wide lower air intake and air-channeling devices help to enhance the model's aerodynamic efficiency. At the rear, the outgoing car's elliptical brake light clusters have made way for vertically oriented units inspired by those on the Telluride, and a new rear bumper has been designed to appear as if it houses twin exhausts.

A skid plate also features as an indication of the new Sorento's off-road capability. Kia claims the SUV has been "engineered to maximise driving stability in all environments", with a new Terrain Mode helping the wheels to achieve peak traction on snow, sand and muddy ground.

The Sorento sits atop an all-new monocoque chassis, and its proportions have been altered with the aim of making it look longer, by way of shorter front and rear overhangs and a 35mm-longer wheelbase.

All other dimensions are only around 10mm greater, although space inside – especially for middle-row passengers – is said to be significantly enhanced, thanks to improved packaging. All UK models will be seven-seaters. 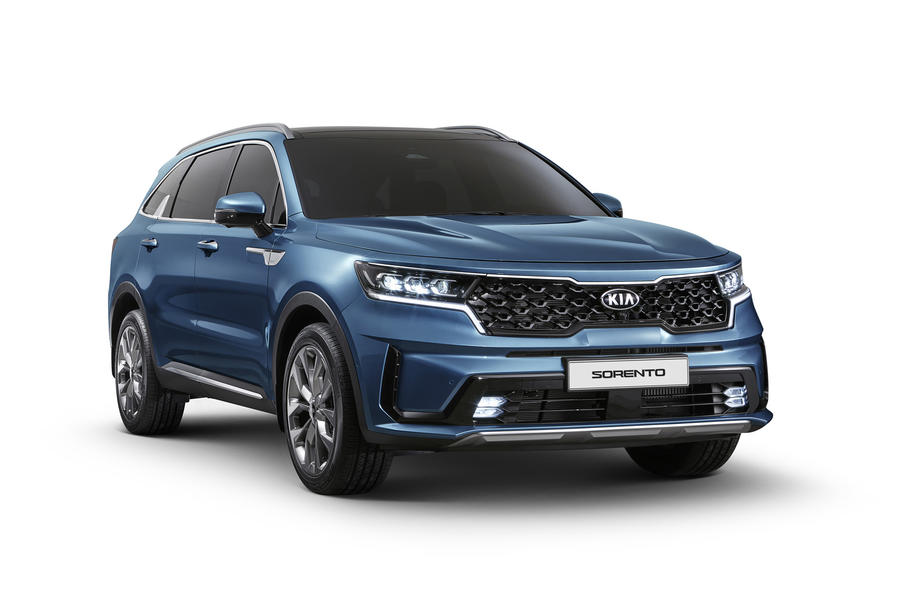 Highlights include a Mercedes-style panel that links a larger infotainment touchscreen to a new digital instrument display, while a separate climate control panel is flanked by central air vents. The brand calls the new Sorento the 'most high-tech' model it has ever produced.

Technical firsts for Kia include improved cruise control that automatically readjusts limits according to corner gradients, a self-parking function accessed via the key fob, automatic braking if the car is about to hit something while parking and a blindspot monitoring system that uses cameras mounted on the door mirrors to project images of what’s alongside the car onto the dashboard.

Alongside safety features such as park assist, blindspot assist, driver alertness detector and speed limit recognition, the Sorento is the first model to feature Kia's new 'multi-collision brake system', which can determine the risk of a secondary collision after a crash, applying the brakes to prevent additional impacts.

Volvo should be flattered

Volvo should be flattered that Kia are stealing design inspirations from them clearly. Debatable if it works mixed with other influences.I test drove a Sorento when they first came out, back then it was a £25K budget car, the interior was dire and the roadholding a bit frightening, it spent more time bouncing in the air than in contact with the road, each corner had a mind of its own.

How things have moved on since then! luxury, hi tech family bus now.

Rival to the Skoda Kodiaq???

This report says 'The fourth-generation Sorento is a rival to the Skoda Kodiaq'.  I don't think so.Car brokers such as Auto eBid will sell me a 1.5litre petrol 7 seat Kodiaq SE for just over £22k.  The Sorento, admittedly undiscounted, starts at £38k.  I really don't think these two are in the same ball park.

I like the look of this Sorento but is it massively overpriced?  Maybe not; it may just be more evidence that I am getting progressively poorer.

Shame because its platform sharing cousin the Hyundai Santa Fe is a bit of a looker for a big old barge . Can never remember which brand is the sporty cool one and the other the duller but more family orientated. Eg Audi v VW
View all comments (14)