Land Rover is ramping up its electrified range with the revised Range Rover, which now offers a plug-in petrol hybrid with 31 miles of electric-only range.

Our first drive of the Range Rover in 1970

The introduction of a plug-in hybrid electric vehicle (PHEV) to the updated Range Rover line-up follows the announcement last week of the Range Rover Sport PHEV, which uses an identical powertrain.

The two models now spearhead the Jaguar Land Rover plan to have an electrified version of every model on sale by 2020. 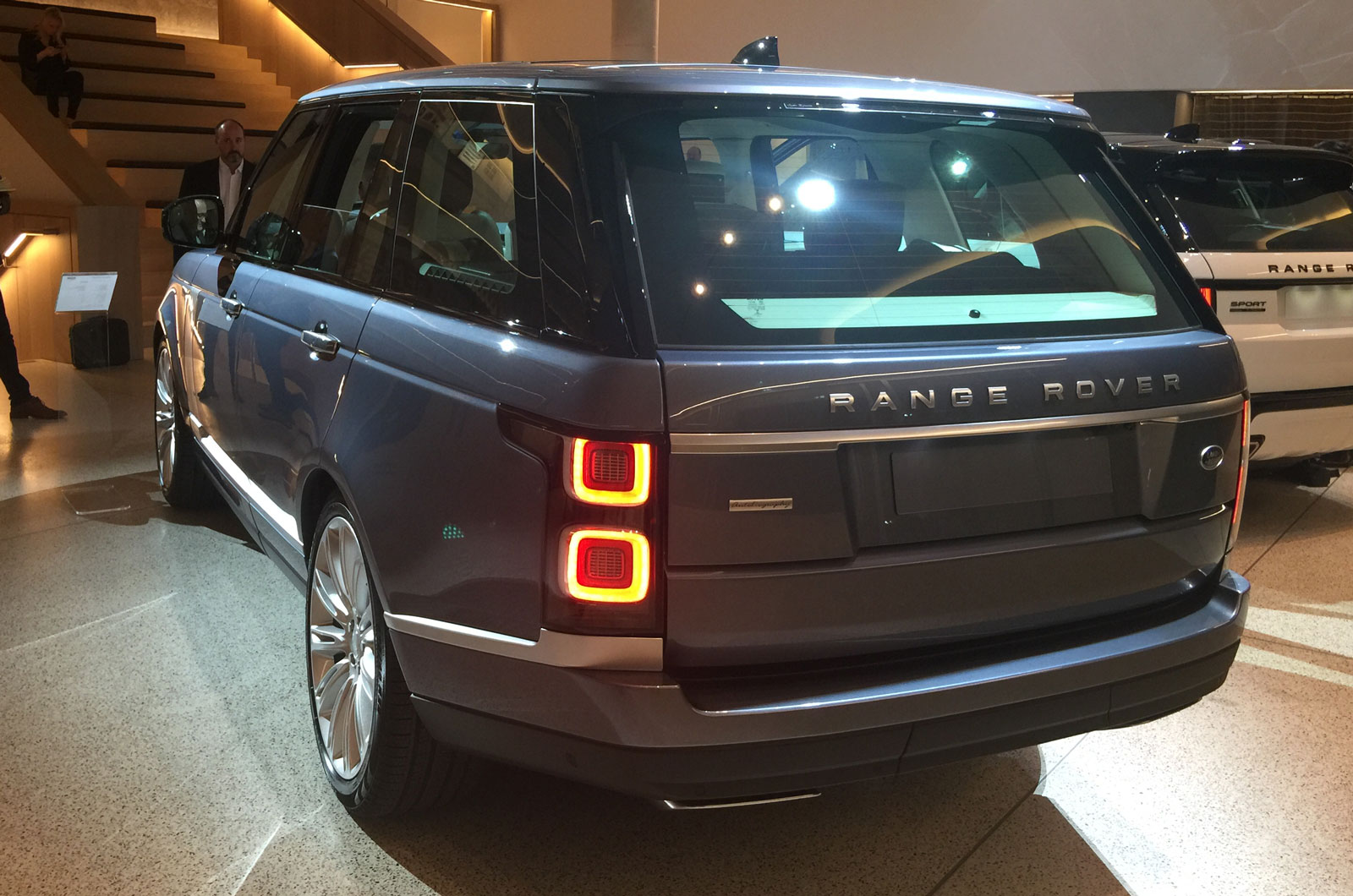 The updated Range Rover, which rivals the Mercedes-Benz GLS and Bentley Bentayga, also gets an overhauled interior to bring it into line with the Velar and a new range-topping SVAutobiography Dynamic. Gerry McGovern, Land Rover's design director, said of the new cabin: "This interior is a revelation, rest assured".

The most powerful production Range Rover yet, the SVAutobiography Dynamic uses a 5.0-litre supercharged petrol V8 with 557bhp, a 15bhp increase over its predecessor, and has 516lb ft of torque. It covers 0-62mph in 5.4sec, 1.4sec slower than the W12-powered Bentayga.

Created by JLR’s Special Vehicle Operations, the range-topper has a new chassis calibration to optimise performance as an alternative to the standard Comfort mode. This lowers the ride height by 8mm and is designed to “heighten driver engagement without compromising comfort”, according to the firm.

The flagship model also gets an exclusive mesh grille design with chrome inserts and a revised rear bumper with integrated metal tailpipes.

The new Range Rover P400e PHEV combines a 296bhp 2.0-litre four-cylinder Ingenium petrol unit with a 114bhp electric motor, offering a total output of 398bhp available through the permanent four-wheel-drive system. It delivers 0-62mph in 6.8sec and a top speed of 137mph. On the combined cycle, it emits 64g/km of CO2 and achieves 101mpg.

The P400e, which is offered in both standard and long-wheelbase styles, replaces the SDV6 Hybrid Diesel powertrain that was previously offered. 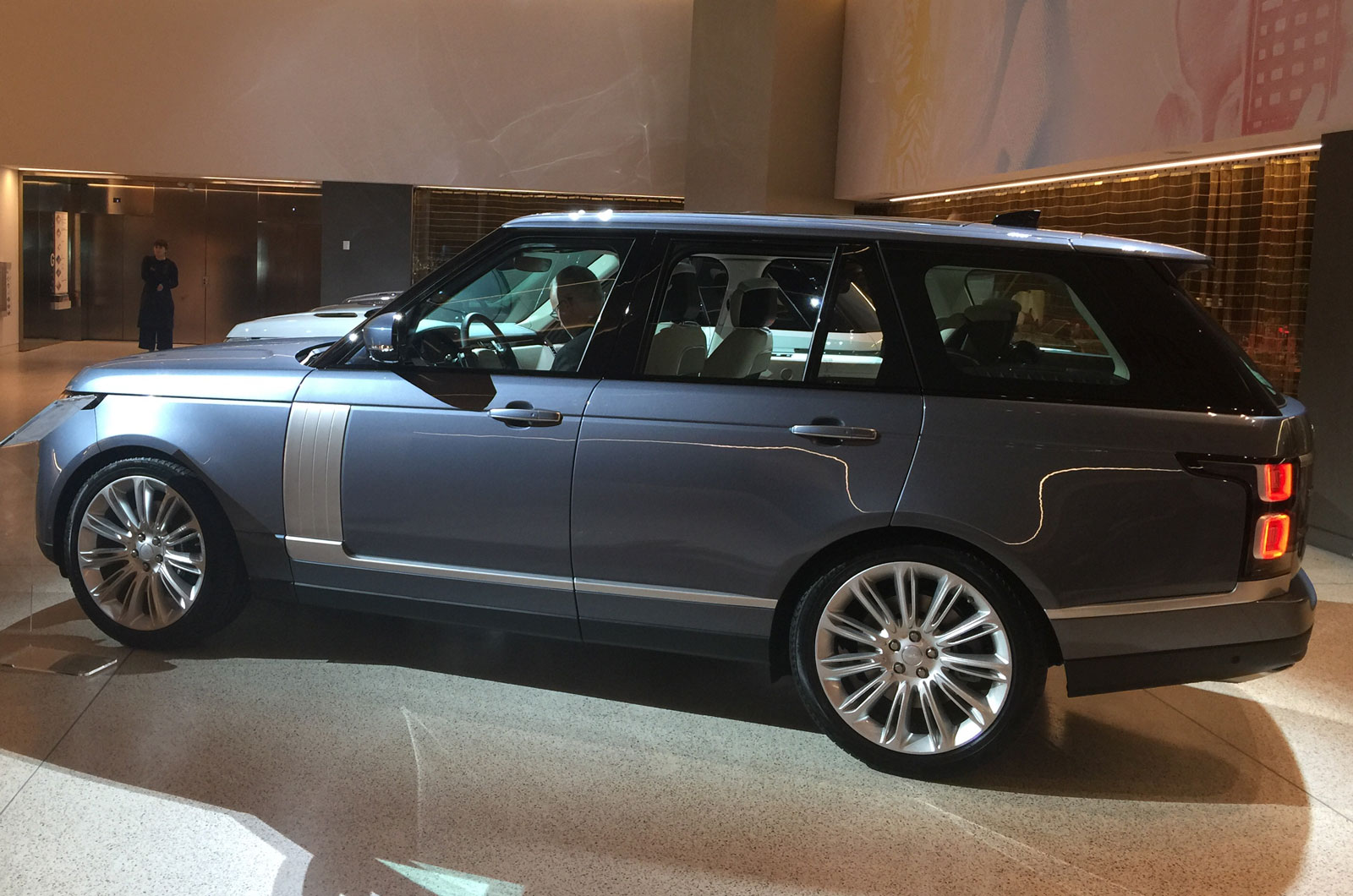 JLR vehicle line director Nick Collins said: “[The PHEV] isn’t simply a no-compromise solution. It builds on the traditions of our flagship SUV and delivers heightened refinement and comfort with impressive performance and efficiency.”

Parallel Hybrid mode combines petrol and electric drive and allows the driver to optimise battery charge or fuel economy. It has a Save function that prevents the battery charge dropping below a selected level. A Predictive Energy Optimisation function requires you to enter a destination into the navigation system. The system, which is similar to that in many new plug-in hybrids such as the BMW 330e, then uses GPS altitude data to optimise the switch between electric motor and petrol engine, maximising fuel economy over different gradients. 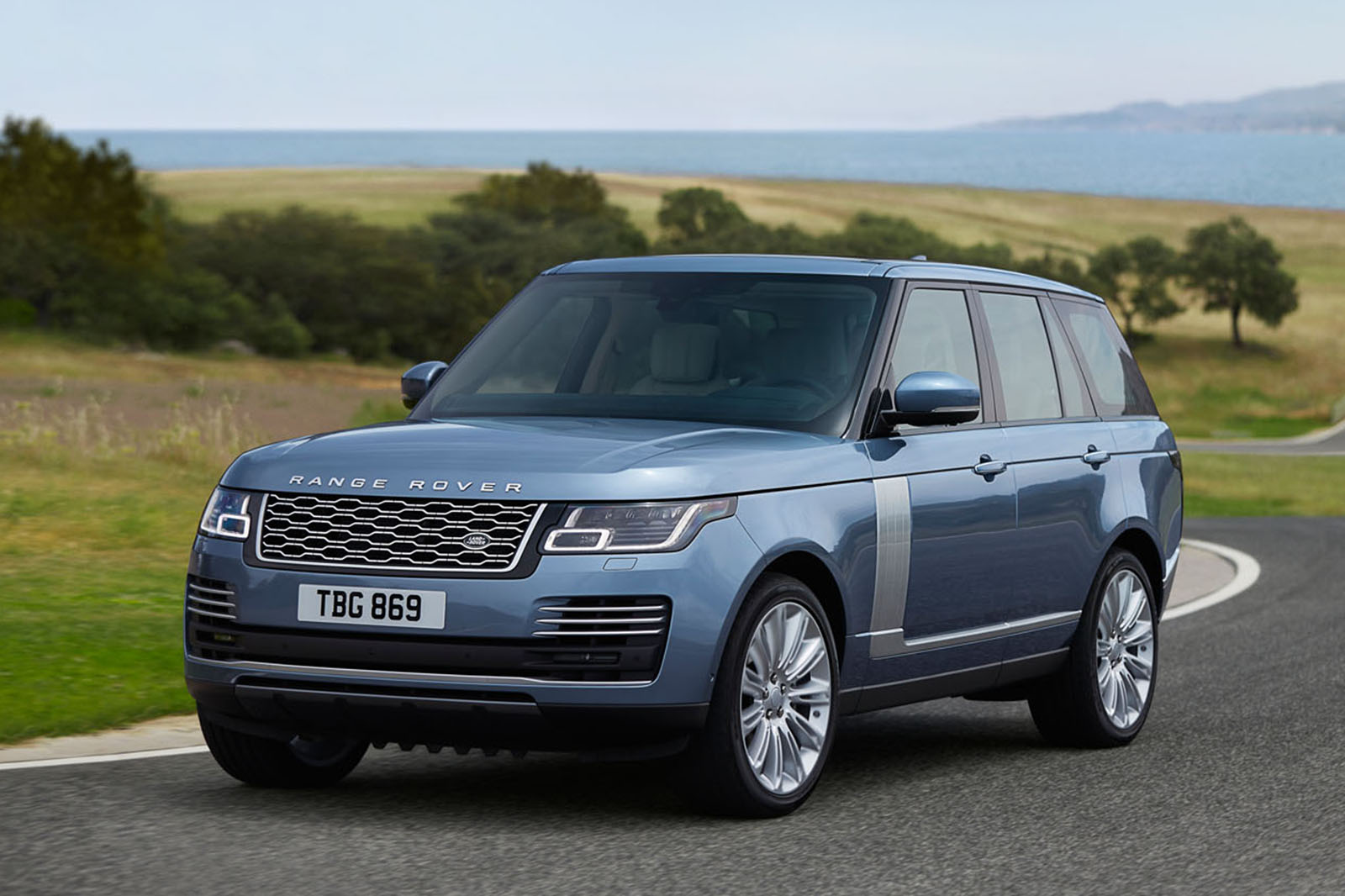 The 13.1kWh lithium ion battery sits at the rear beneath the boot floor, so there is less boot space than in the standard car. Charging cable access is behind the Land Rover badge on the right of the front grille.

Land Rover says a full charge can take as little as two hours and 45 minutes via a special home wall box, but a standard charge takes seven hours and 30 minutes.

A full range of petrol and diesel powertrains, including V6 and V8 units, sits alongside the SVAutobiography Dynamic and P400e in the line-up.

Styling changes across the range include a refreshed grille with a gloss black surround and a front bumper with widened vent blades. At the rear, the updated bumper integrates the exhaust tailpipes in all models. 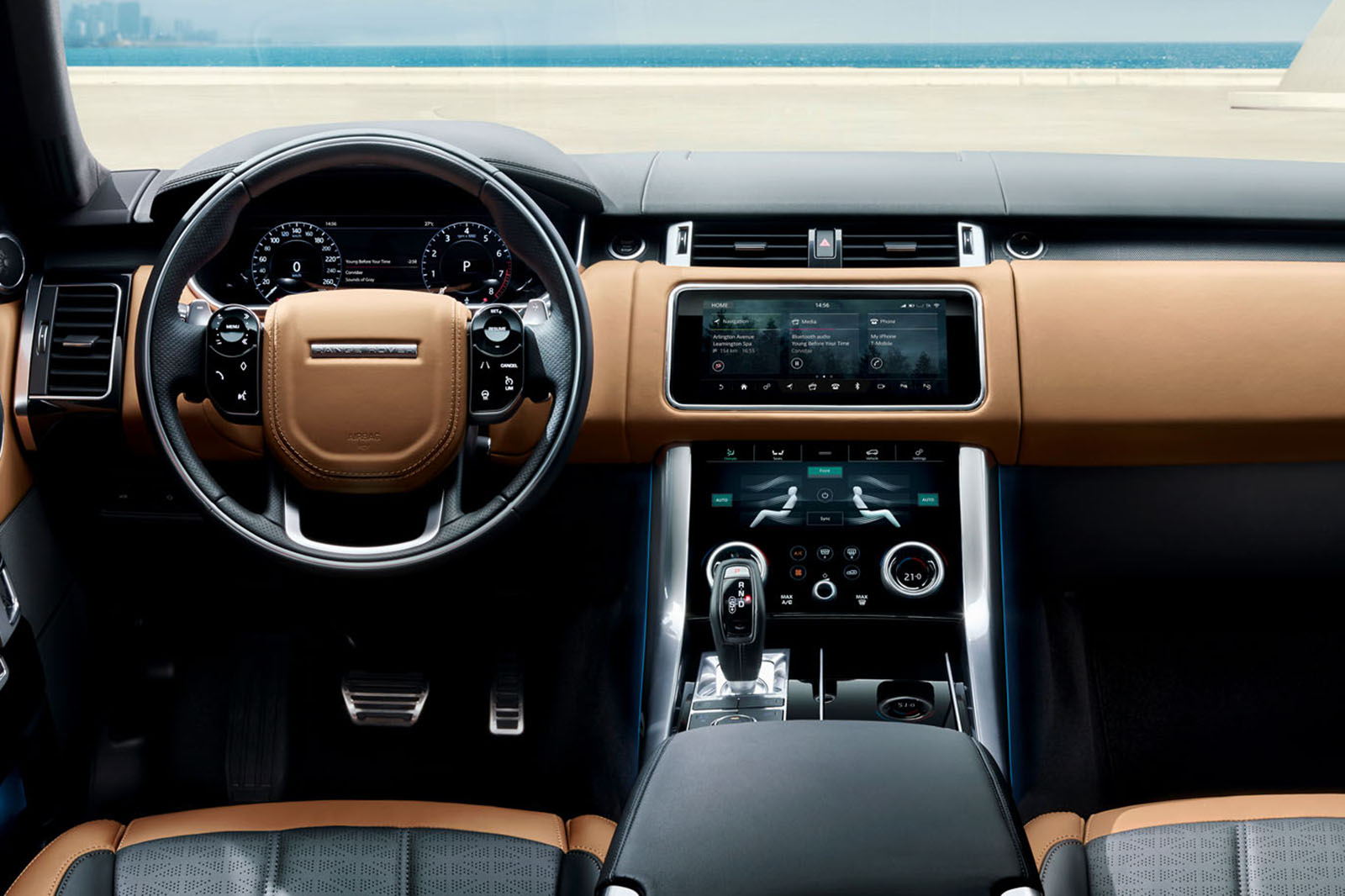 The most dramatic overhaul is inside, with equipment now more in step with the Velar. The line-up gets Touch Pro Duo infotainment, which features two 10.0in touchscreens on the central console. The front seats have new seat frames with wider and deeper foams and heated armrests.

There are also up to 17 connection points, including domestic plug sockets and USB, as well as 4G wi-fi hotspots for up to eight devices.

The SVA LWB models are discontinued for 2018. Looking at How many left you can see why as only a handful were sold.
Spanner 11 October 2017

yep, as I have commented before. LR No longer has any interest in the country set. Now more interested in cash rich new money. It's hard to argue with as it really makes good business sense because it is a big market segment - and I am not being sarcastic here.  RRs are now seen as celeb vehicles, and the celebby types aspire to them on this basis.

Clearly the lack of a proper green LR/RR is a final declaration of the company's new found customer direction. But I am sure you can get it as a special colour. I mean, Jordan or whatever her name is has a Pink one.

I believe you can now by LR Labrador repellant too. Good news! By digging into the optional extra packs I have found that you can, as a no cost option, have the central console changed into a sparkly heated Pug bed in diamanté.

Couldn't agree more with Rudler's comments above - not every owner is a footballer, or aspires to be a ghetto rapper. I think the tide has turned when you can't actually buy a green Land Rover or Range Rover without specifying an extra four grand's worth of SVO paint - you can't have a green Discovery now, full stop!

I think it shows a betrayal of the traditional customer base - we're into the seventh decade of green Land Rover products in the family, now seemingly coming to an end. I also see a good number of green ones around (even in London, where every other car is a black L405), so it's hardly niche interest.

I suspect Mr McGovern dislikes the colour because it clashes with his suits, and the dirty, muddy countryside plays havoc with his delicate Italian footwear.