BACK TO ALL NEWS
Currently reading: Porsche Macan prototype 2018: first drive of refreshed SUV
UP NEXT
Tesla to expand select UK Superchargers to other electric vehicles

It’s not often I get nervous driving at less than walking pace. But when I saw the boulder-strewn, ditch-riddled, steep and rocky ridge I was supposed to climb, I got really quite nervous.

Nervous about being revealed as the inexpert off-roader I am, more nervous about damaging a rare and valuable prototype on one of its final sign-off drives and, I guess, most nervous about tripping over a crag, falling over the edge and having enough time on the way down to calculate the terminal velocity of a 2019 Porsche Macan before it and I splatted ourselves into a pristine patch of South African veldt.

Porsche, it seemed, had decided to show me that the Macan was more than just the most entertaining SUV ever to be put on the market and that in this, its second generation form, it was also a formidable off-roader.

What had been done to achieve this? Had a low-ratio transfer ’box been fitted? The suspension raised? The approach and departure angles radically enhanced? No, no, thrice no. It seems Macans could always peddle this shtick, just nobody knew.

But in an environment requiring monster traction, manoeuvrability and driver interaction it was outstanding, as the fact that I survived to tell the tale attests.

What did that tell me about how Porsche has transformed this car after three years in the marketplace? To be honest, not a thing. Truth is, the car is not transformed. The car has been disgustingly successful these last few years and done more than any other to turn Porsche into the most profitable car company on earth. Why would you transform that? Or even much change it?

Except that Porsche can’t help itself. More than any other mainstream company on earth, Porsche loves to tinker, even when there’s no apparent need. And tinker it has, far more than the blink-and-you’ll-miss-’em revisions to the Macan’s exterior suggest. 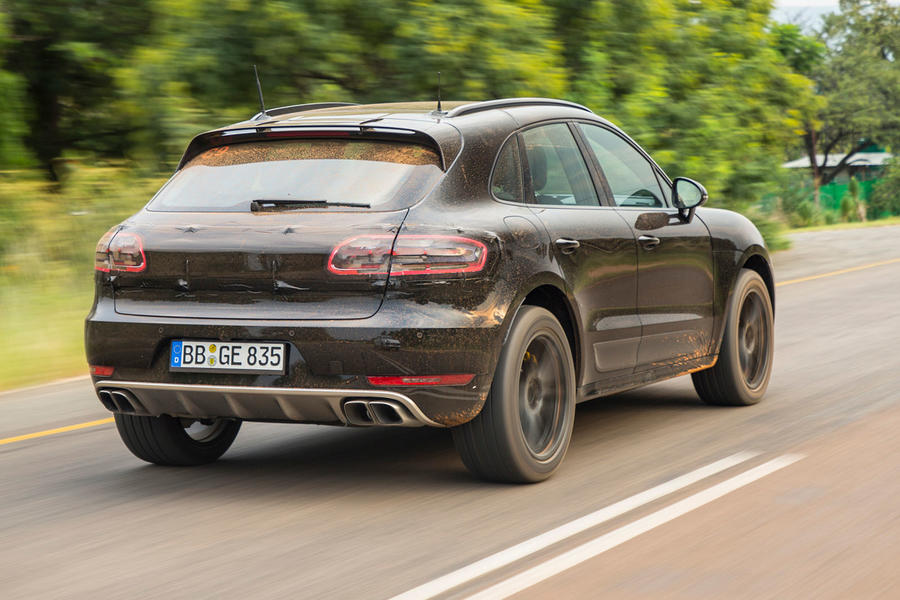 And now you’re going to have to forgive me for being a little less statistically precise than usual, because at the time of writing the car does not actually exist, officially at least. The cars I drove were partly disguised and there is no press information, so what follows is based on unattributable gen gleaned from the various development drivers with whom I shared the cars.

Even so, I believe that what follows is absolutely what will be announced nearer the car’s official autumn unveiling, or as near as makes no difference.

The biggest changes come under the bonnet. Sadly, in line with Porsche policy the diesel Macans have gone (and rumours of a hybrid in this generation appear exaggerated) but the base Macan, the Macan S and Macan Turbo all receive considerable engineering upgrades.

The standard car retains its 2.0-litre turbo motor, but with its output raised from 248bhp in the current version to something close to the 300bhp the same engine generates in the likes of the VW Golf R.

Always something of a rarity in the UK, the performance upgrade this brings – along with the tax and fuel consumption benefits – are likely to make it a far more significant player in the UK market, especially now the strong selling diesels have gone.

The Macan S and Turbo both receive entirely new engines, though in the former case it might not look like it as it remains a 3.0-litre V6. But it’s the new-generation V6 from the Panamera that places its turbo in the vee for better emissions performance; its power is likely to rise from the current 335bhp to 355bhp with an appreciable additional slug of torque.

In short, it sits in the space occupied by the Macan GTS today. The replacement for that car will, in usual Porsche fashion, follow the rest of the range at a respectable distance.

The Turbo uses essentially the same engine but in 2.9-litre capacity (the reduction because it needs a beefed-up crank to cope with the extra power and therefore has a shorter stroke). It will increase power from the 394bhp of the current 3.6-litre motor to 434bhp, which just happens to be the same output as today’s car when carrying the optional Performance Pack. That hits 62mph in 4.4sec and I’d not expect the new one to be significantly different. 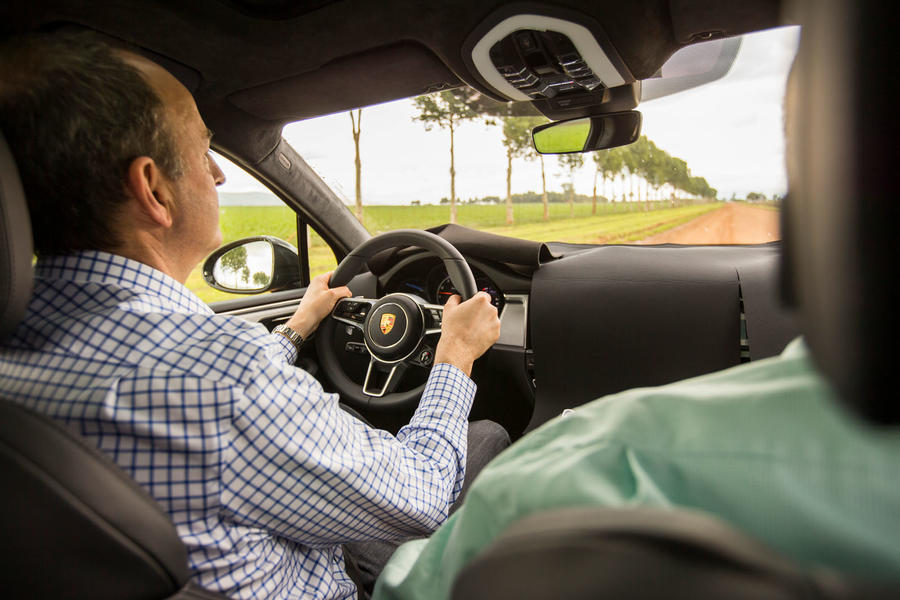 Elsewhere Porsche has fitted aluminium uprights to the suspension to reduce weight, improve noise suppression and ride comfort, reprogrammed the steering to make the car feel a little more positive and introduced its tungsten-coated brakes as an option (look for white calipers).

Cosmetically, aside from the usual mild tweaks to lights and bumpers the big change is to the interior, with the adoption of the large central TFT screen bringing state of the art infotainment to the Porsche. The actual instrument display retains analogue dials, or at least did in the cars I drove.

Could I tell the difference made by the chassis changes without old cars present for comparison purposes? Of course not and neither could anyone other than a Porsche development engineer. They drove like, well, Macans, which is to say they drove brilliantly.

It’s a different matter with the engines. Regrettably I’d never driven a four-cylinder Macan before but I’d like to again because, contrary to expectations, it works really well. The engine is as smooth as it is in the Golf, genuinely characterful at high revs and unless you drive like someone set fire to your pants, more than capable of keeping up with the six-pot models. It was a genuine and very pleasant surprise.

The improvement to the Macan S was less dramatic but still welcome: the new engine is smooth enough and imbues the mid-range Macan with very impressive performance indeed, enough to make me wonder whether the Turbo would be worth it.

The 2.9-litre motor does indeed provide explosive acceleration and while there will be many people who just want the top model, I’d say the 3.0-litre S was a touch more refined and, in the real world, very little slower.

So, no transformation for the Macan, but then none was needed. Before this mid-life update it provided the most desirable range of mid-sized premium SUVs on sale, and I’d be staggered if the status quo has not been maintained. 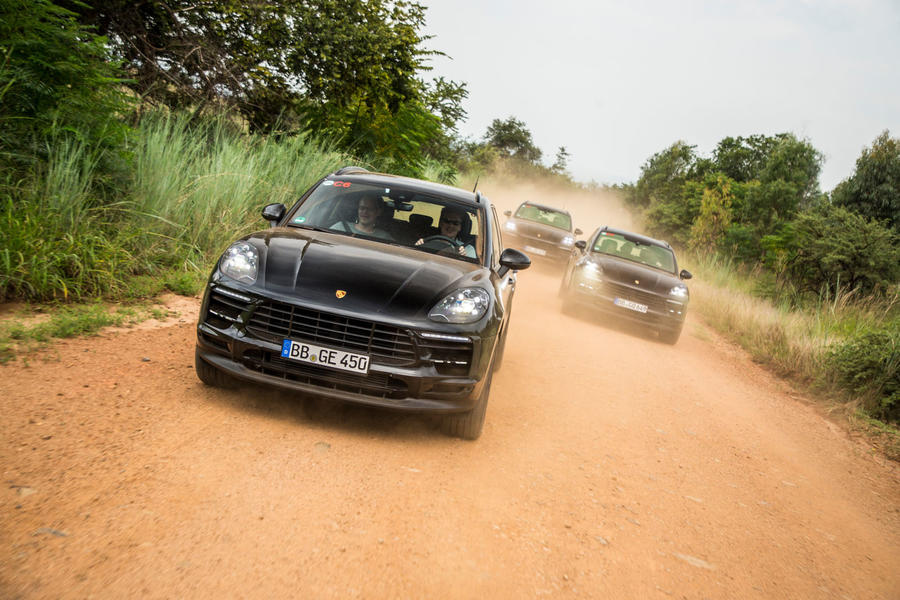 each and every mod will be electrical to 100%!

The word is spelt veld and pronounced velt. Thanks
Michael Joseph 5 June 2018

more like a mid lifecycle update or facelift than 2nd generation.....