BACK TO ALL NEWS
Currently reading: Peugeot 308 to get EV and MHEV options but hot hatch unlikely
UP NEXT
First drive: 2022 BMW XM prototype

Peugeot will launch mild-hybrid and electric versions of its new 308 but is unlikely to introduce a hot Peugeot Sport Engineered range-topper.

Product boss Jérôme Micheron told Autocar that the new family hatchback will be a "key player" in Peugeot's planned shift upmarket and that the multi-powertrain offering - currently comprising a pair of plug-in hybrids alongside pure petrols and diesels - will help to broaden its appeal and paves the way for further electrification.

"We want to give the customer the power of choice, because the market is evolving so fast but we want to have the right answers," he explained. "We're launching the new 308 with petrol and diesel, we've already decided a roadmap in which we will launch MHEV and we also have a plan for an EV offer on the 308."

"We would rely on the existing EMP2 [platform for the electric 308], but in the Stellantis group we have several options to create electrification."

The EMP2 platform is compatible with pure-ICE, mild-hybrid and plug-in hybrid powertrains and has already been used in extended form for electric versions of the Peugeot Traveller, Citroën Spacetourer and Vauxhall Vivaro Life MPVs.

The electric 308 would therefore likely use the 134bhp set-up employed by those models, with a 50kWh battery offering upwards of 150 miles per charge and capable of charging at rates of up to 100kW.

Micheron suggested that Peugeot will subsequently offer more powerful electric models using the new eVMP architecture, which is designed primarily for SUVs and will be launched in 2023.

However, the possibility of a 300bhp-plus plug-in hybrid version of the 308 to join the hot 508 in the new PSE line is now unlikely, due to low sales forecasts and emissions regulations. 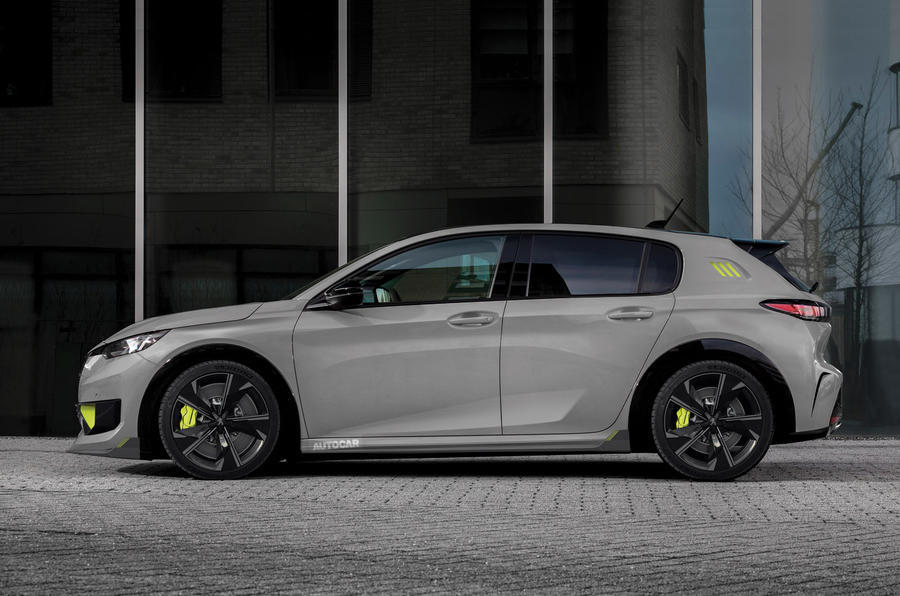 "It's still under assessment, but the market has been shrinking very significantly," explained Micheron. "We're considering some options for PSE products, but today we don't see that much volume for a very powerful engine, and when you look at CO2 regulations and limitations, we're not sure that's the right foundation for the performance vehicle."

"There's also the question of a hybrid and the weight of the vehicle, so we're not that confident today about bringing a 308 PSE to market."

As reported by Autocar, the 308 PSE was set to adopt the same four-wheel-drive petrol-electric plug-in hybrid powertrain used by the top-rung version of its 3008 SUV sibling.

Micheron did, however, confirm plans for a second PSE-badged car in place of the 308.

"Neo-performance brings new performance with a very low level of CO2 emissions and also the right level of pleasure for driving," he said. "So this is part of our strategy, and we're assessing another product in PSE.

"We're not keen to discuss future products, but we will bring to the market one product which fits with the CO2, driving pleasure and performance."

look at the recall campaign for the ami (low cost psa cars) :

. A lot of extra work for Citroën, which announces immobilizing each existing Friend for a period of 3 to 4 weeks, in order to carry out the following actions:

Checking the vehicle's leaktightness: injection of a component in the roof area and modification of the door adjustment for a better fit against the seal.
Control of the opening and closing systems of the doors and change of the driver and passenger locks to ensure proper closing of the doors.
Checking and changing the wiper motor to avoid a potential blockage of the latter.
Control and verification of the vehicle's electrical system with updating of the battery control software to optimize its operation.
Control and verification of the robustness of the weld points on the base for better durability.
Checking and checking the braking system with changing the distributor if necessary to guarantee the correct level of performance.
Checking and checking the handbrake sensor with replacement of the part if necessary to avoid any potential battery charging fault.

one of the many issues of thee three cylinders engines :

In total, nearly 220,000 models produced between 2013 and 2017 and equipped with this engine will be recalled by the PSA group.

Life is not a long calm river for the recent gasoline engines of the PSA group. After the reliability issues at the start of the last decade with the 1.6-liter THP four-cylinder, it is now the turn of the 1.2-liter PureTech three-cylinder petrol engine to have some concerns. The PSA group has just confirmed a recall campaign concerning 220,000 models equipped with this engine.

In detail, this concerns models Peugeot, Citroën and DS equipped the 1.2-liter PureTech three-cylinder petrol engine with 110 or 130 horsepower and manufactured between March 2013 and April 2017. The problem comes from the timing belt that would wear out prematurely and which would damage the brake assist system. A problem already well known by the group’s technical services. Another problem, the engine also suffers from cylinder head fouling, which can lead to engine breakage in the most serious cases.

I have serious debout about the jdpower survey just looking at all the ongoing PSa recall...

At what point will PSA (or Stelantis or whatever) introduce a wider range of electric drivetrains. While 45kWh usable battery and 136bhp is ideal for a Corsa or 208, it's going to struggle to compete for long in these bigger cars isn't it?

MinusG40 26 March 2021
for sure but look at the "quality" of their first car e208 there is a serious bunch of hardware and software issues (due to the lack of. investment in the r&d) so doing another engine / battery is going to be complicated..
michael knight 26 March 2021

due to the lack of. investment in the r&d

what's that statement based on?

i know people that work there

i know people that work there

Oh the irrefutable argument "I know someone".

MinusG40 27 March 2021
as much as the yours... if you spend at least 5mn on google you have an array of information showing the reduction in both people and quality:

Psa is selling some wind.. . charging premium for badly design car (like the 3 cylinders engine with severe cambelt issue but of course for a psa fan boy it is difficultto accept)

for sure but look at the "quality" of their first car e208 there is a serious bunch of hardware and software issues (due to the lack of. investment in the r&d) so doing another engine / battery is going to be complicated..

I've not experienced any hardware or software issues? VW ID3 owners on the other hand seem to have plenty.

MinusG40 26 March 2021
some people might be bug blind... those psa car are plagued with them not to mention the outdated traction control from the dark ages

At what point will PSA (or Stelantis or whatever) introduce a wider range of electric drivetrains. While 45kWh usable battery and 136bhp is ideal for a Corsa or 208, it's going to struggle to compete for long in these bigger cars isn't it?

Agreed, I would really hope the 150 miles quoted here (presumably based on the larger vans and their less aerodynamic shape) is off the mark.

Really in something 308 sized, it needs to be competing with the lower spec ID3s and maybe more than the Citroen eC4 due to the likely price difference.

Peugeot really need to invest here if they want us to take the premium thing seriously. The products are fantastically finished off but when it comes to battery tech and their apps, they need to improve based on my experience with my e208. On-board tech is fine.

In a car as small as the 308, 50kWh should offer >150 miles of motorway range (75mph). If the range is that low for combined city/motorway driving they need to go back to the drawing board.  These recycled ICE platforms are only going to work for a short time.

They're going to have to soon offer 75-85kWh pack sizes for cars the size of the 508. That's going to be the average pack size I foresee going forward of any car that large, offering a 230-250 mile real world range at motorway speeds, while stretching north of 300 miles at lower speeds. I'm interested to see if we start seeing multispeed transmissions on mainstream EVs or if that remains relatively uncommon outside of things like the Taycan and e-tron GT.