BACK TO ALL NEWS
Currently reading: Nissan plots large electric SUV to follow Ariya
UP NEXT
Fisker goes radical with Pear EV SUV

Nissan’s electric line-up could soon include a large SUV, joining the Nissan Leaf and the new Ariya SUV that will be launched in late 2021.

As Nissan’s third bespoke electric model, a large SUV is a natural next step given the demand for such vehicles in China and the US, as well as the company’s role in the Renault-Nissan-Mitsubishi Alliance to lead projects involving large cars.

The recently revealed Ariya uses the new CMF-EV architecture, a modular platform created purely for electric models. As with other car makers such as Volkswagen and its MEB electric platform, a family of Nissan models is expected to use the architecture given the heavy investment involved.

Nissan Europe’s EV boss, Helen Perry, hinted at the large SUV, saying: “The platform will be used for other cars in the future. The C-SUV and D-SUV segments are due to grow about 300% over the next three years, so we will look to use the platform in growth segments in the next few years.”

Nissan has pledged that 50% of its line-up by 2023 will be electrified, but Perry wouldn’t divulge if the next EV will arrive by that date.

“It all depends on the demand of the customer,” she said. “If we’d bought Ariya to market earlier, I’m not sure customers would have been ready for it. Technology wouldn’t have been as up to date as it will be at launch. And while Covid-19 has been terrible, it has made customers review what is important – for example, emissions.” 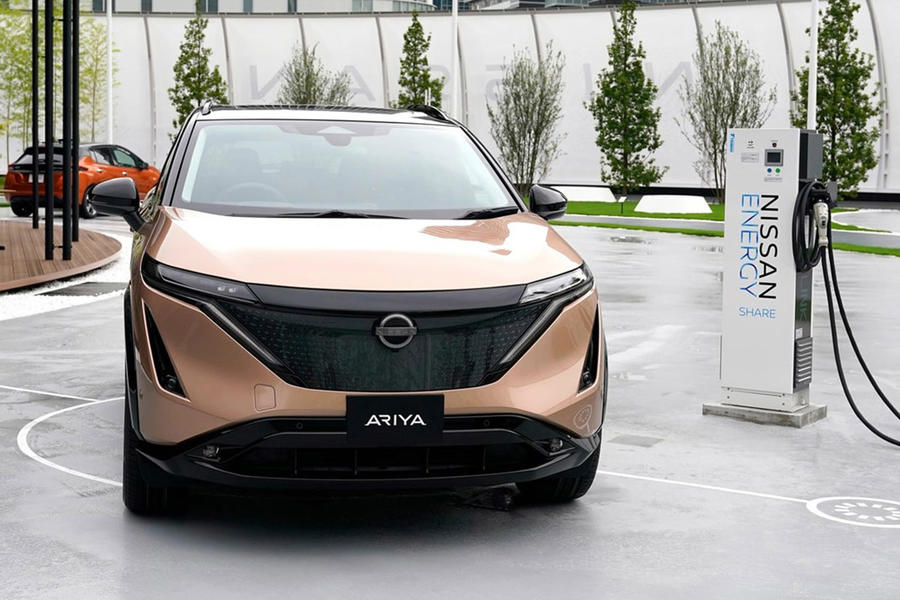 An electric large SUV would offer around 310 miles of range, matching the Ariya’s top range figure. Perry didn’t write off future EVs offering longer ranges but said the Ariya’s 310 miles is an important threshold to bring consumers on board. Perry also elaborated on the reason the Ariya has switched to a different on-the-go charging solution in Europe, shunning the Chademo connection of the Leaf for the more widely used CCS system.

She said: “We expect the Ariya to be the first car in a household, whereas the Leaf is typically a second car.

“The choice we’ve made for the Ariya is based on the way the customer will use the car. We’ve put in a bigger battery to have as little range anxiety as possible – hitting the 310-mile mark – so it’s important if people are using it to travel [long distances] that they have access to the widest options for quick charging.”

However, CCS doesn’t currently support vehicle-to-grid charging like Chademo does, and this is an area that Nissan is keen to grow.

Perry said: “We are not abandoning Chademo. We will continue to have it on the Leaf and Nissan e-NV200. It also has bi-directional charging [for vehicle-to-grid] while CCS is at the early stages of investigating that.”

Chademo will also still be used for the Ariya in Japan.

Maybe they could do a Renault

Maybe they could do a Renault badged version of it, and call it the Koleos

Use the well known 'Patrol'

Use the well known 'Patrol' moniker for it. Nissan are not great though at leveraging their brands and heritage. Need some of Volkswagen marketing boffins on board.
View all comments (4)