UK pricing and spec details of the new Renault Zoe have been revealed, ahead of Renault commencing orders in mid-September and first deliveries in January.

The new Vauxhall Corsa-e rival is, like the old car, available with two purchasing options. It can be bought outright from £25,670, or £18,670 under Renault's battery leasing scheme. The firm hasn't quoted monthly battery lease costs yet, however.

The base Play model comes with a 106bhp electric motor, alongside kit such as LED headlamps, Apple CarPlay and Android Auto, DAB, auto lights and wipers and a 7kWh fast charging wallbox, including installation. 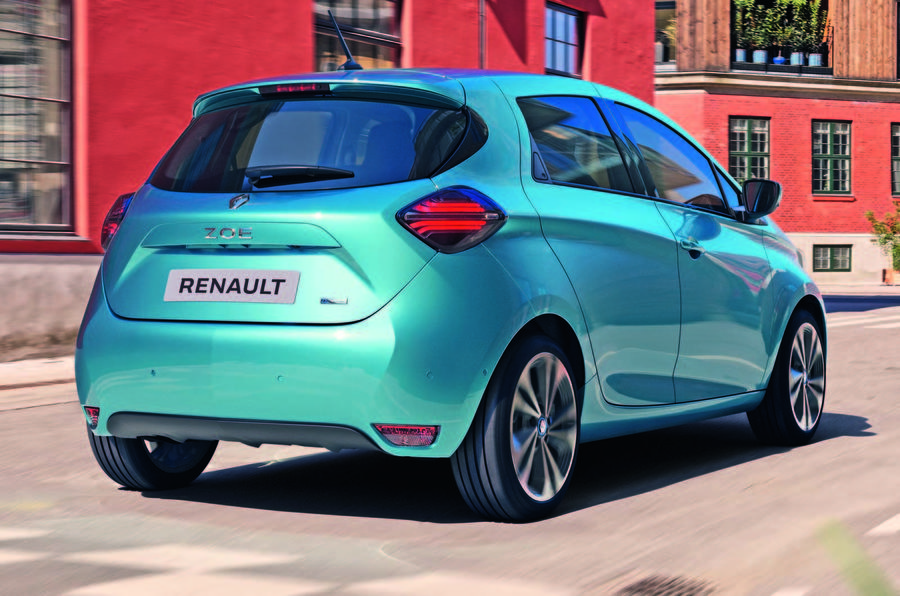 Step up to Iconic from £27,170 (or £20,170 under battery leasing) and you'll also get sat-nav, climate control, wireless phone charging and a driver assistance package, among other features.

Iconic also brings the option of the more powerful 132bhp motor, allowing 0-62mph in 9.5sec and a limited top speed of 87mph, for an extra £500. That's standard on GT Line trim, which gets a larger 9.3in touchscreen, a rear-view camera, synthetic leather and recycled cloth upholstery and blind spot warning.

Options include 50kW DC rapid charging with a CCS connector, costing £750. Designed for those who intend to do frequent long journeys, it can deliver 90 miles of range in around 30 minutes.

Effectively a heavy redesign of the outgoing model, the new Zoe will go on sale in a dramatically different market from the one its predecessor entered in 2012, with a range of competitors including the new Peugeot e-208, Vauxhall Corsa-e, Honda E and Volkswagen ID 3.

Sharing the same overall dimensions as the outgoing Zoe, the car’s design is updated with new grilles and bumpers, plus new, standard-fit LED headlights and tail-lights. There is a fresh colour palette inside and out, as well as new wheel designs. The intention has been to modernise the supermini’s looks. 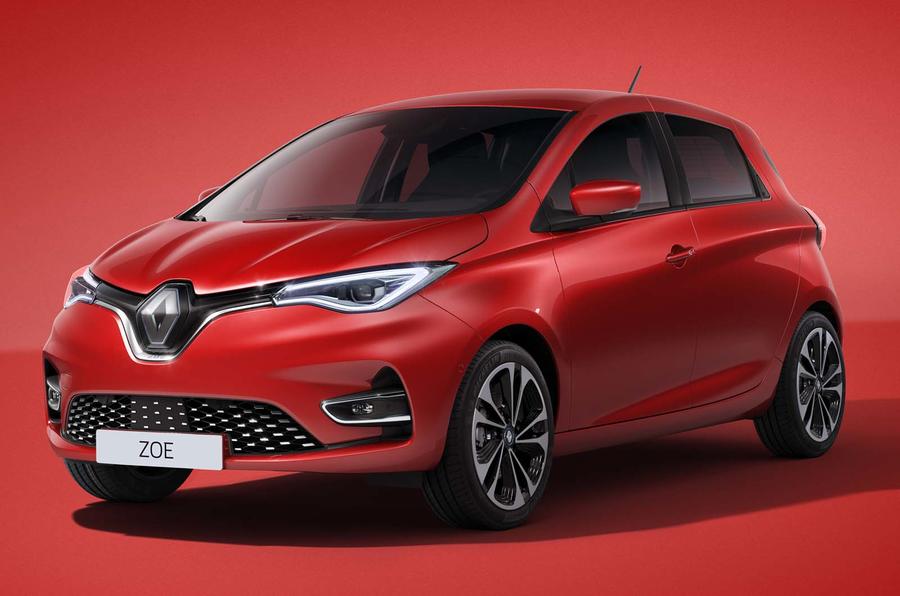 The interior is more heavily revamped, with a new dashboard design introducing a 10.0in customisable digital instrument display as standard across the range.

Top-spec cars also receive a new curved 9.3in touchscreen infotainment display, similar to that found in the latest Renault Clio, using the firm’s Easy Link connected technology. As well as being able to locate suitable charging points, it can tell if one isn’t functioning properly. A new smartphone app can also remotely pre-heat or cool the car.

Higher-quality materials and new upholstery, including one made using 100% recycled fabric, aim to give the Zoe a more upmarket air. New details, such as an electronic gearlever and parking brake, free up extra storage space in the cabin, while wireless smartphone charging and an acoustic windscreen have been added. 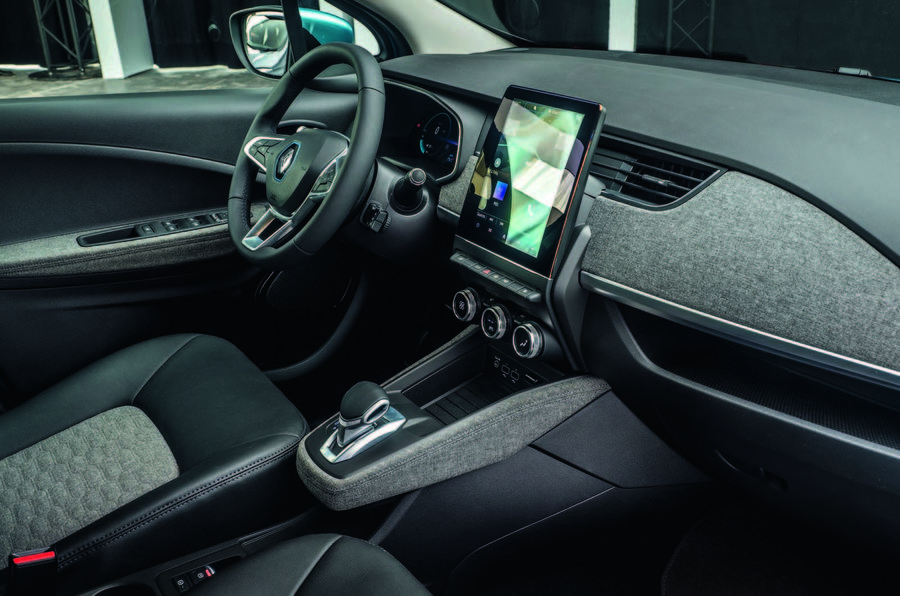 The Zoe’s biggest developments are in the powertrain department. The previous generation, which was upgraded throughout its life, made use of a 40kWh battery in its highest spec, but now an increase to 52kWh allows Renault to claim a WLTP-certified range of up to 245 miles.

The new Zoe is now available with a choice of two motors. A base 106bhp unit – carried over from the old car – is joined by a higher-spec 132bhp version. Renault claims this power unit, which makes 181lb ft of torque, allows the Zoe to achieve the 0-62mph sprint in less than 10 seconds and go from 50mph to 75mph in 7.1sec. Its top speed rises from 81mph to 87mph. 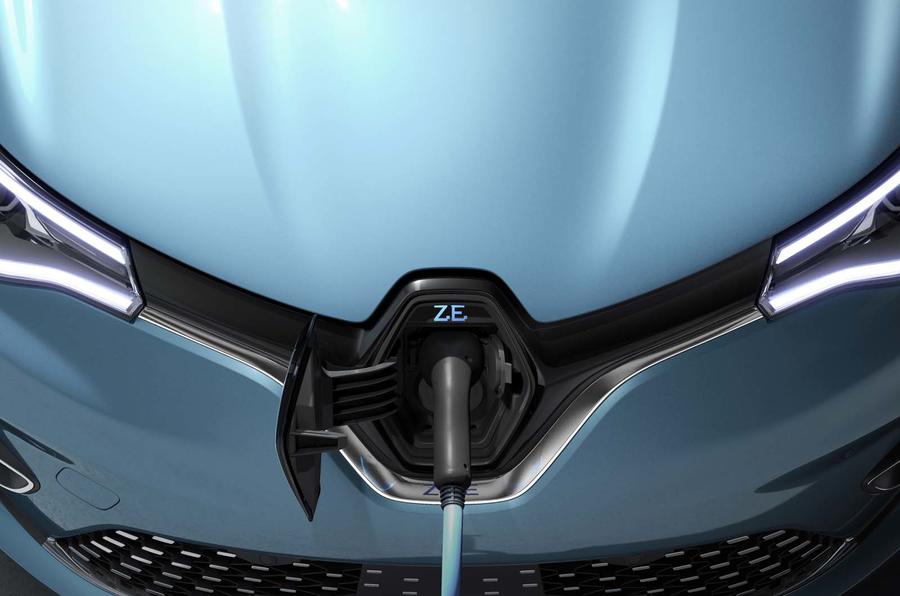 Chassis changes are limited, but Renault claims the spring and damper rates have been tweaked and all-round disc brakes appear for the first time.

This is effectively a heavy facelift of an older design. Why not an all-new platform? 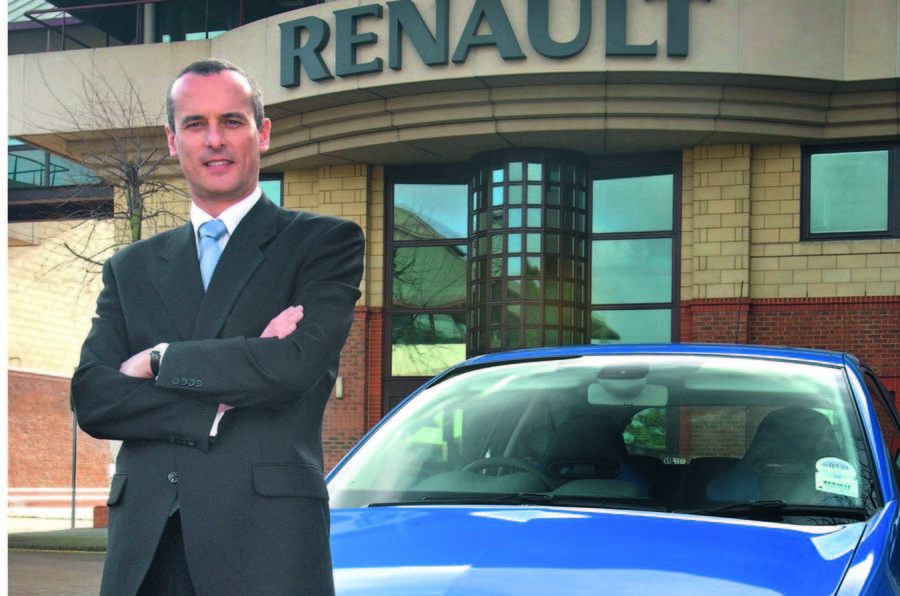 “We are in the unusual situation where we have a seven-year-old vehicle whose sales are growing significantly year on year. We are confident that this Zoe has plenty of life left in it, but we are considering using a common [Renault-Nissan-Mitsubishi] Alliance platform in future.”

You claim the new Zoe is part of a wider assault on the EV market. What is next?

“Our objective is to cover A-, B- and C-segments, with multiple shapes of vehicles [ie standard cars and crossovers/SUVs]. These will be focused on being passenger cars. I cannot tell you more at this stage.”

Does the recently launched Renault City K-ZE fit into these plans in Europe, or is it just for China?

“We are currently investigating if the City K-ZE has international sales potential. No decision has been made yet.”

All-new Renault Clio is firm's most advanced supermini yet​

Made Honda look very silly too.

New bumpers? Surely the front one, the rear is same as before. After Nissan, Renault also uses the same formula: retouch here and there and voilá, 'new' car. Way to milk the cow! I fear this time it isn't enough, another facelift and recharge 52kWh via a CCS2 plug at a maximum rate of 50kW isn't going to be competitive against new comers like the Corsa.