BACK TO ALL NEWS
Currently reading: New Peugeot 108 priced from £8245
UP NEXT
Porsche Taycan: new rear-driven base model takes price to £70k

Built in the same plant in the Czech Republic alongside sister models from Toyota and Citroën, the new 108 will be offered in Peugeot's four familiar trim levels - Access, Active, Allure and Feline. A convertible model called the 108 TOP will also be available.

Top-spec Feline versions of the 108 start at £11,845, and come quipped with leather upholstery and dual zone air conditioning as well as leather trim inside.

The 108 TOP features a retractable fabric roof that can be opened and closed electrically at any speed, and is priced from £10,345. Peugeot is aiming to get customers personalising their cars, wth eight body colours available alongside three roof colours and a number of themes for the interior.

Although built alongside the Citroën C1 and Toyota Aygo, the new 108 will also compete against those models in the crowded city car market. The new C1 will also go on sale in July with prices also starting from £8245. It's expected that Toyota's Aygo will also follow that structure, although official pricing has yet to be confirmed. 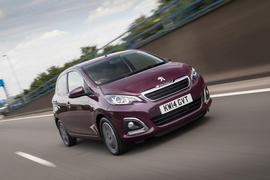 Peugeot have the configuration tool on their website for the 108, with the Active model with rev-counter, spare wheel and metallic paint taking the 1.0 3 door to just over £10k. The centre console does remind me of the Punto Sporting from a few years ago, but overall it does seem a car worth considering. The fact that there are a lot of new models coming out this year and next may mean that the price becomes subject to discounting by eager dealers.
fadyady 1 May 2014

You know it makes sense

With city run-abouts priced at well over £8 grand the rise and rise of Dacia is bound to continue. Not only Volkswagen but other manufacturers will be forced to introduce budget models\brands for price conscious buyers who do not wish to be ripped off in the name of perceived quality-and-or-reliability.
artill 1 May 2014

Personalisation is a great

Personalisation is a great idea, and of course many of these choices will require a factory order, so i hope people dont mind waiting. On a personal note, it would be nice to be able to personalise it by not having those awful dark tinted rear windows, but sadly even with a factory order that seems to be one step of personalisation too far for Peugeot
catnip 1 May 2014

artill wrote: On a personal

On a personal note, it would be nice to be able to personalise it by not having those awful dark tinted rear windows, but sadly even with a factory order that seems to be one step of personalisation too far for Peugeot

Yes, but just think of the advantages. Getting one in a dark colour will make it look like you're driving...... a small van :)