BACK TO ALL NEWS
Currently reading: Peugeot 108 set for July launch
UP NEXT
Dealers report huge drop in luxury used car prices in 2020

The new Peugeot 108 aims to be one of the lightest and most efficient cars in its class, following its reveal at the Geneva motor show.

The French manufacturer aims to give the 108 a range of "ultra-efficient three-cylinder engines" and a kerb weight as low as 840kg. The model will again be produced alongside sister models from Toyota and Citroën in the Czech Republic.

Measuring 3.47m long and 1.6m wide, the new 108 hatchback comes in both three-door and five-door forms, supplemented by the addition of a new convertible version that has a fabric roll-back roof that's likely to command a premium of around £1000 over a standard hatch. Peugeot says the electrically powered convertible roof is 80cm wide and 76cm long and can be opened in stages.

The styling of the new car is more sophisticated and polished than the outgoing model, as befits Peugeot’s attempt to be seen as a more upmarket and premium competitor in the mainstream car market.

The tightly fitted headlamps and grille give the car a similar look to the new 308, while the rear lights have the same 'lion’s claw mark' rear-light cluster graphics. The tailgate has a single-piece glass exterior skin.

Peugeot says that the 108's cabin "feels like it comes from a much large premium car". The speedo housing is, once again, mounted on an adjustable steering column and includes an analogue speedo and LCD screen.

More upmarket options will include a 7-inch infotainment touchscreen, keyless entry and push-button start and automatic air conditioning. The touchscreen operates the MirrorLink system for Android, Windows and Blackberry phones and uses an app to work with Apple phones, too.

This system allows the smartphone to be operated via the touchscreen, though when the car is on the move, only navigation and other infotainment apps can be activated. Peugeot is also offering ‘Peugeot Music’, its own internet radio station.

The new 108 will come in Access, Active and Allure trim levels and will also feature plenty of personalisation options.

At launch, the new 108 will come with a range of small-capacity three-cylinder engines. A 1.0-litre VTi with 68bhp is the entry-level option, emitting up to 97g/km of CO2 in its standard form, with an e-VTi version bringing that down to 88g/km.

The more powerful 1.2-litre VTi has 82bhp and emits 99g/km of CO2. Peugeot will offer the 108 with a five-speed manual or five-speed automated manual transmission.

All the engines are three-cylinder petrol units. Diesel engines, especially in EU6 form, are now too expensive to be used in entry-level city cars and are unlikely to be cost-effective with petrol engines now making huge strides forward in terms of economy.

As expected from an entry-level city car, the 108's running gear is simple with a ‘pseudo-McPherson strut’ front suspension and deformable rear axle made from a shaped tube.

Peugeot says the latter is lighter and better performing than a traditional axle made from pressed steel.

Six airbags are standard, as is electric power steering. The car comes on either 14in or 15in wheels, depending on specification. ABS, electronic brake force distribution and switchable ESP is standard as is a speed limiter. Automatic lighting and a rear-view camera are on the options list. 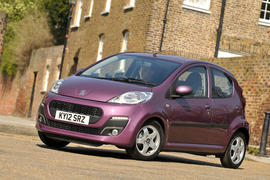 The Peugeot 107 has been relegated to 'average' in the city car market, being outclassed by the Hyundai i10

How many badges/names does a car need at the front?

It says Peugeot in the grill, and has a Peugeot badge on the bonnet a few inches away - too much. Otherwise I quite like it. Maybe they should try and hobble their sales by calling the Peugeot Bert to pay homage to the Adam's naming disaster?

Saw a Renault Capture the other day - looked like a huge Renault emblem with a small SUV attached to it.

Lots of publicity for Peugeot

It's interesting that this new generation of Peugeot / Citroen / Toyota small cars are all being launched separately - whereas last time round, I remember seeing the trio of cars all launched simultaneously with a group photograph of the cars together.
Right now this is obviously benefiting Peugeot, which is getting all the publicity - I wonder why this version was selected to launch first? Maybe it also means that the three cars will have more distinct personalities this time round which can only be a good thing for customer choice. It would also be interesting to learn how these cars were developed - last time round I seem to recall that Toyota did most of the work, with the French contributing mainly the diesel engine.
Flatus senex 15 February 2014

Although preferable to some efforts in the past it is depressing to see Peugeot retreating into dreary corporatism in the manner of a certain European car conglomerate. Judging from the pictures this style suits the 108 rather less than its bigger brethren.

Hopefully the Citroen version will display a bit of flair. Citroen deliver this almost alone amongst mass producers nowadays although not with absolute consistency.