BACK TO ALL NEWS
Currently reading: New Mercedes-Benz T-Class van-based MPV to launch in 2022
UP NEXT
EV chassis could provide a lifeline for niche car makers

Spiritual successor to Vaneo will be based on second-generation Citan van, and developed alongside next Renault Kangoo
Share
Close
Share story

Mercedes-Benz is developing a new small van-based T-Class MPV,  which will include an all-electric variant, in partnership with the Renault-Nissan-Mitsubishi Alliance.

Set to go on sale in the first half of 2022, the new machine will sit underneath the V-Class, and will be developed alongside the second-generation Citan commercial van. The current Citan, which was launched in 2012, is heavily based on the Renault Kangoo, and the new T-Class will effectively replace the Citan Tourer passenger derivative.

Mercedes has released a single teaser sketch of the outline of the new T-Class, the spiritual successor to the short-lived Vaneo MPV the firm produced between 2002 and 2005. Marcus Breitschwerst, the head of the firm's Vans division, said the new machine was designed for "families and those with active pastimes".

While it will be developed with the help of the Alliance, Mercedes said that the T-Class will feature "unmistakably typical characteristics" of the firm's models. It will be designed for a range of uses, including passenger transportation as part of "sharing services", with sliding doors on both sides.

Mercedes-Benz has yet to detail specific powertrains, but said that a fully electric version would be offered alongside combustion engined versions. The EV version of the current Kangoo features a 59bhp electric motor offering a range of around 100 miles.

The current Citan is produced at a Renault commercial vehicle factory in France. It is likely, although unconfirmed, that this arrangement will continue with the T-Class and next-generation Citan when they enter production in 2022.

Cut down in their prime: the Mercedes-Benz Vaneo and other cars with short production runs 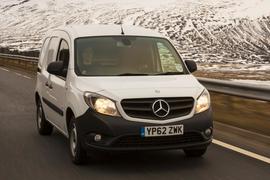 Mercedes' first-ever compact van is the sister of the Renault Kangoo, but the Citan offers considerable brand appeal

Personally I'd of thought after the failiure of the X-Class pickup truck,Mercedes Benz would have thought twice about selling another company's product as a Mercedes. At least the Vaneo was based on the architecture of the A-Class and despite it's name there wasn't a commercial van version built,I'd speculate that why the Vaneo failed was that it was too expensive,the starting price was much higher than the Berlingo/Partner and Kangoo and if you indulged in some of the options offered the vehicle priced itself out of the market. Like the MPV version of the Renault Kangoo there doesn't appear to be an MPV version of the Citan on sale in the UK either. Looking at the van based MPV market in the UK price seems to be a major factor the Berlingo/Combo/Rifter plus the Torneo Connect are pretty close together and I'd really be surprised if there would be enough punters prepared to stump up the extra premium  for the Mercedes badge