Ford has revealed the first-ever all-electric Transit ahead of first examples arriving in Europe in spring 2022.

The E-Transit, which will be available in up to 25 different sizes, weights and body variants, offers an “estimated” WLTP range of up to 217 miles. Ford says this is “roughly three times the distance the average European fleet driver covers daily”.

That range figure comes from a battery mounted under the floor with a usable capacity of 67kWh. The E-Transit also features both AC and DC fast charging: an 11.3kW on-board charger allows a slow charge in just over eight hours, while DC charging at rates of up to 115kW enables a 15% to 80% charge in around 34 minutes. Customers are given access to the FordPass charging network, with around 160,000 chargers globally - many with rapid-charge capability. 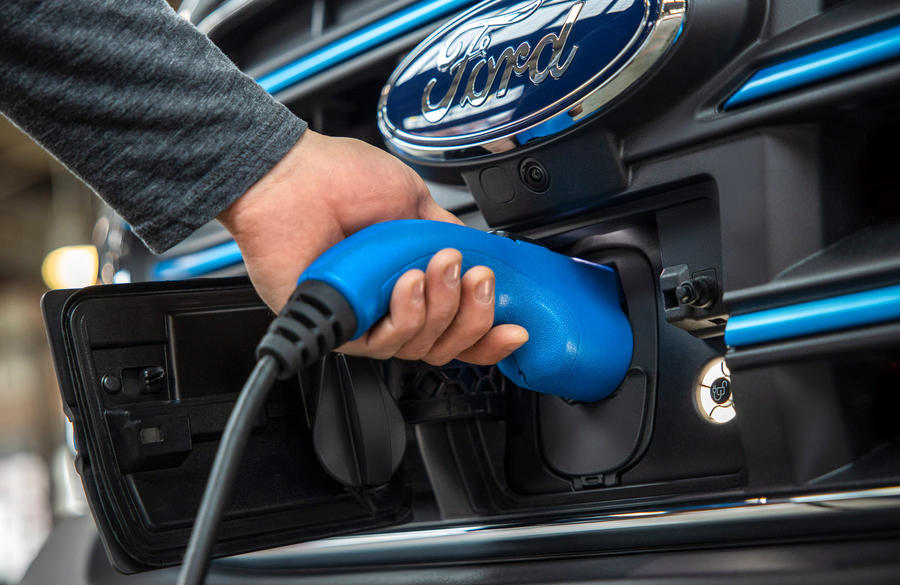 Ford has spoken to a number of commercial fleet managers from brands such as Centrica, Sky and ADL Automotive, with the consensus being that a range of around 150 miles is the minimum acceptable, while rapid-charging capability is a must. Data from millions of miles of telematics also informed the development of the E-Transit.

Peak output from the electric motor, powering the rear wheels, is 265bhp and 317lb ft - Ford claims it is the most powerful electric cargo van in Europe. No performance or motor efficiency figures have been revealed yet.

The E-Transit also features an eco drive mode, claimed to improve range by 8-10% in unladen driving by regulating acceleration, optimising the climate control and reducing the top speed.

Further features include a ‘Pro Power Onboard’ option, enabling customers to use the E-Transit as a mobile power source, providing up to 2.3kW of power for various tools and equipment. It’s claimed to be an industry first, and is expected to be a popular addition.

Design-wise, the E-Transit looks broadly identical to the existing diesel models, bar a new grille design with blue horizontal bars. The charging point is also mounted centrally in the grille, below the badge.

Standard kit will include the FordPass Connect modem, designed to optimise the fleet efficiency for commercial customers via a number of telematics services. The E-Transit will also feature a 12in touchscreen running Ford’s latest Sync 4 software, offering over-the-air updates, enhanced voice recognition and cloud-based navigation. 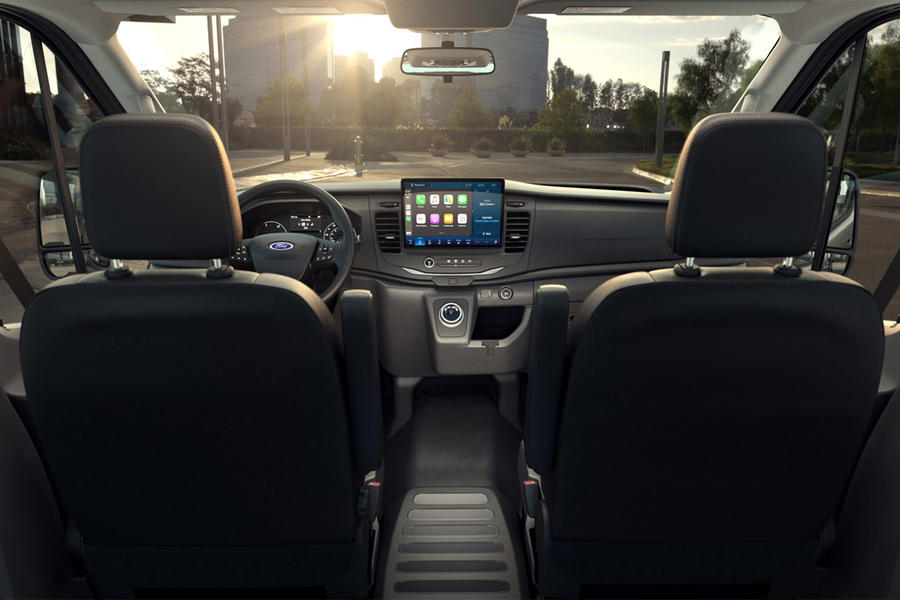 A suite of the latest active safety tech will also be offered, including a system that allows fleet managers to impose a speed limiter that adjusts speed according to limit signs. Systems seen in EV passenger cars, such as climate control pre-conditioning, enhance comfort.

Despite the technology focus, Ford claims it has been careful to ensure “uncompromised” cargo capacity given its purpose. To accommodate the floor-mounted battery, the E-Transit’s driveline and rear suspension were redesigned (with a “heavy duty” independent semi-trailing arm for the latter). This results in the same cargo space - 15.1 cubic metres - as a rear-wheel-drive diesel Transit.

The payload rating is up to 1616kg for the van model or 1967kg for the chassis cab variants. Different length height and mass options are available up to a gross vehicle mass of 4.25 tonnes. Alongside a 1000-strong European network of Transit Centres for servicing, Ford has collaborated with “hundreds” of global vehicle converters and modifiers to provide compatible accessories for the diesel Transits.

The E-Transit is already being tested in “all conditions and weathers” in a harsh regime not dissimilar to that of the diesel version’s development. Ford also claims to have extensively tested "extreme use cases", such as a high amount of fast charging, regular and a lack of maintenance, to ensure its just as reliable - if not more so - than a diesel Transit.

An eight-year, 100,000-mile warranty for the battery and high voltage components features, while European customers receive a "best-in-class" one-year, unlimited mileage service scheme. It will be built on the same line as the regular Transit in Turkey, with the battery sourced from Poland and the electric motor sourced from the US.

Ford claims it will be undertaking “extensive customer fleet trials” with the E-Transit in key European markets during 2021. It forms part of Ford’s $11.5 billion global electrification investment through 2022.

You do make me laugh Autocar

Other electric vans are already available, including the likes of the Vauxhall Vivaro-e and Mercedes Sprinter electric. Ford are taking a very long time to bring out an electric van. Meanwhile in Edinburgh where I live the council are the first in the U.K. to take delivery of a fully electric bin lorry! The vehicle can do an 8-hour shift, and only takes 5 hours to recharge! It's estimated it will save the council £18,000 in fuel per year. Now if an electric bin lorry can be created by 2020, why does it take until 2022 to make the Transit fully electric?

Toyota has sold millions of hybrid vehicles over the past 10 years in Europe, including SUV's, hatchbacks, superminis, saloons and estates. Vauxhall sells an electric Corsa, a plug-in-hybrid Grandland X and has just brought out a fully electric variant of the new Corsa. Volkswagen sell a plug-in-hybrid Golf and Tiguan, as well as 2 fully electric vehicles; the Up! and the ID.3. Mercedes' sell plug-in-hybrid versions of the A-Class, B-Class, C-class, E-class, S-class, GLA, GLC, GLE and CLA.

Meanwhile, excluding mild hybrids (which can't run on electrcity alone), Ford sells only 2 electrified vehicles; the Plug-in-hybrid Kuga and the Hybrid Mondeo. The plug-in-hybrid Kuga's already seen a major recall since it was released, and nobody buys the Hybrid Mondeo. Literally nobody. Ford are failing on electrification. A fully electric van in a couple of years still won't change the fact they're not doing enough on the car side of things.