Fiat is gearing up to begin customer deliveries of the all-new electric 500 in March 2021 and has today confirmed that prices will start from £19,995 when order books open in December.

That price includes the £3500 plug-in car grant and is for the entry-level hatchback-only Action car, which is powered by a 94bhp electric motor capable of 0-62mph in 9.5sec and an 84mph top speed. The variant's 23.8kWh battery offers a WLTP-certified range of 115 miles and can charge at speeds of up to 50kW.

Prices climb to £23,495 for mid-range Passion trim, which can be specified in cabriolet form for an additional £2650. Fiat claims the new 500 is the world’s first four-seat convertible EV. Its roof is a sliding fabric top, as before.

This version gets the larger 42kWh pack so can travel 199 miles on a charge - significantly up on the 144 miles offered by the new Mini Electric and more in line with the 211 miles from the Peugeot e-208 - and is capable of charging at 85kW. Power output is boosted to 117bhp for a 0-62mph time of 9.0sec. 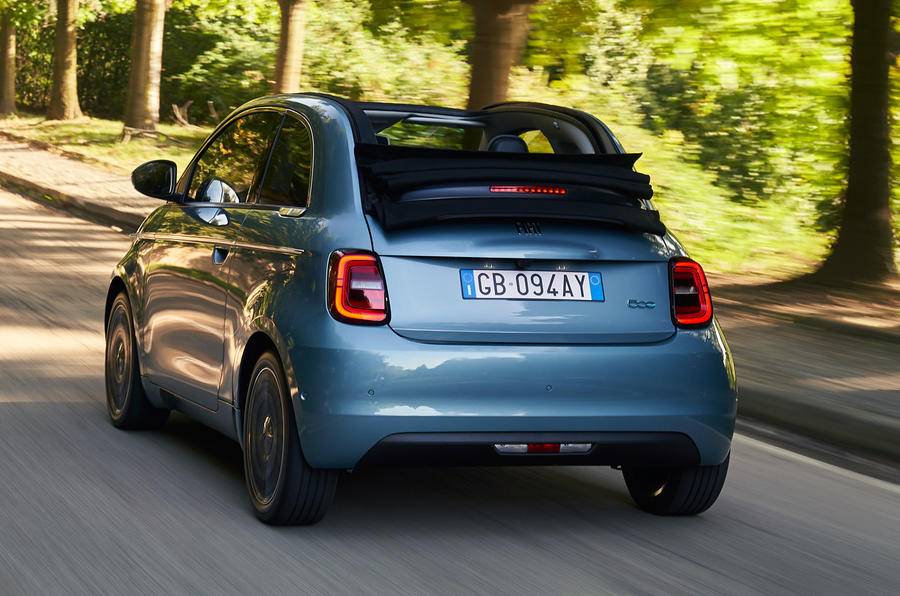 The 85kW rapid-charging system can recharge the battery from empty to 80% capacity in 35 minutes and can take just five minutes to provide the car with 31 miles of range, which, Fiat claims, is more than the needs of most people’s average daily use.

The 500 Passion is marked out from the base-level car by its 15in two-tone wheels and LED daytime running lights and is equipped as standard with a 7.0in touchscreen, smartphone compatibility, cruise control and climate control.

Icon trim caps off the range at £24,995 in hatchback guise and £27,465 as a drop-top. Added equipment over the Passion car includes a 10.25in 'cinerama' high-definition touchscreen, 16in alloys and colour-coded dashboard.

Fiat has also unveiled a new '3+1' option, which adds a reverse-opening rear door on the passenger side for ease of entry to the back seat. The option adds 30kg to the 500's overall weight but is claimed to have "no effect" on handling or range. There's no word yet on whether the 3+1 will come to the UK, but Fiat said it "will firstly be made available for left-hand-drive markets".

The new 500 is only the second iteration of the Italian icon after the original of 1957. It sticks closely to the look of the model that was launched in 2007 and went on to become an incredible sales success for Fiat.

Although the styling suggests otherwise, it is all change under the skin for the 500. This is the first dedicated electric car from Fiat Chrysler Automobiles (FCA), and it makes use of a new architecture that allows the 500’s footprint to grow by 6cm in length and 6cm in width, to 3.63m long and 1.69m wide. It is also 4cm taller than before, at 1.53m.

Fiat boss Olivier François said the new 500 is "not just the third generation of the car, but the third reincarnation of a spirit.

"We're all in. It's all electric and only electric from day one. With the 500's business success, that's a bold decision. But it doesn't feel the time to be timid. This car is not just for 2020, but the next decade. It's built new from the ground up."

The electric 500 will be produced at Fiat’s plant in Mirafiori, Italy. Pre-ordering opened recently for the 'La Prima' high-spec launch edition convertible variant, which costs from £29,000 including the UK government's plug-in grant. The La Prima models will be highly limited in supply, with 500 assigned for the UK. 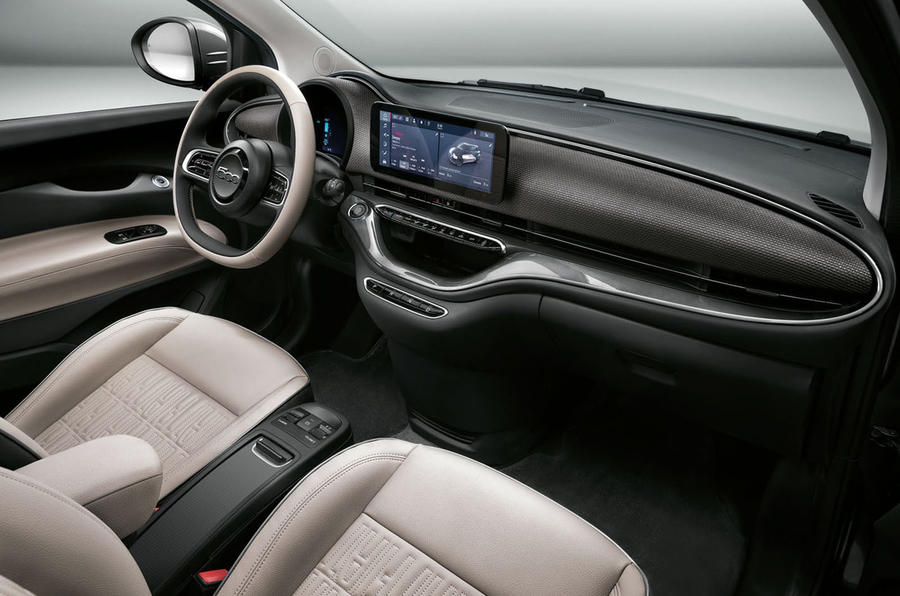 Top speed drops to 50mph when the most eco-focused of the three driving modes, called Sherpa, is selected. This reduces power, throttle response and top speed and switches off the climate control and other ancillary electronics.

Named after Himalayan Sherpas, who guide expeditions to a safe arrival, the mode is designed to reduce range anxiety and ensure the driver is able to reach a charging point should the battery run low.

The two other modes are Normal and Range, the latter of which significantly boosts the amount of regenerative braking to allow practically single-pedal driving. Interestingly, the now legally mandated low-speed acoustic warning in the new 500 is taken from Nina Rota's score for the film Amacord. "We wanted something that stands out. It's the only engine able to play a melody, like the ringtones of your phone," said François.

The exterior look is evolved from that of the current 500. There are sharper lines, but the same cute style of the original remains in the light and bumper designs. Flush door handles now feature, as do LED headlights and tail-lights.

Although the exterior design is broadly similar, it’s all change inside, addressing one of the ageing current 500’s biggest weak points. The dashboard is much wider and the amount of switchgear significantly reduced for a much cleaner overall look.

Infotainment comes from FCA’s new Uconnect 5 system, which on higher-spec cars includes a host of functions such as sat-nav, a wi-fi hotspot and wireless Apple CarPlay. 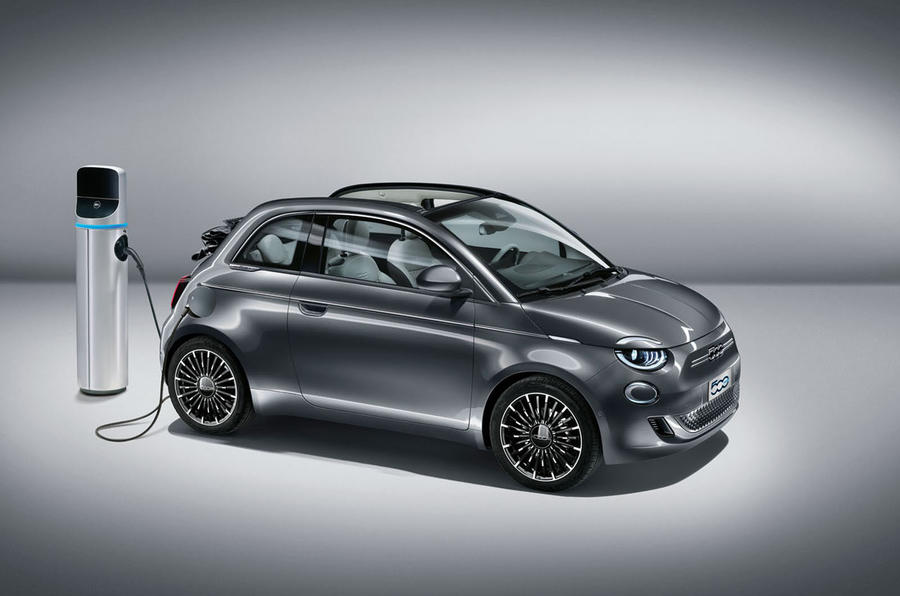 Fiat has brought in automated driving technology on the 500, too. It now comes with adaptive cruise control, lane-keeping assistance and intelligent speed limit assistance, as well as a driver drowsiness detector and a 360deg parking camera.

The current 500 has been recently updated with a new mild-hybrid petrol engine. It will stay on sale for at least two years alongside the EV to offer a more affordable route into 500 ownership and an option for those not ready to go electric.

What has Fiat Chrysler ever done for us?

I like the innovation of the 3rd passenger door

Well done FIAT on not being afraid to do something a bit risky and quirky.  Of course it won't help for the UK (unless they invest on switching the side that the little rear door is on - which I doubt).  This car is growing on me - exceot the stupid 500e badging on the front and steering wheel hub).

Likely to give those at Honda

Likely to give those at Honda and Mini a few head scratching moments.

I like the look of this and may well concider an EV when I finally bin my much loved R56 JCW Mini Conv. My daily commute is 44 miles half of which is motorway, something I have noticed is that Teslas, dispite there much vaunted pace, are generally driven like Miss Daisy, 65 -70 on M4 mixing it with the trucks on the inside lane. Ive seen hundreds and only once have I seen one 'making progress'. I suspect that plummeting range is the issue. I regular trips to London from Wiltshire 100 miles each way and would typically cruise at 80-90 - would a Tesla make it without a recharge? I'm guessing that the 500 would hopeless with this type of use and require 1or 2 recharges to do what the Mini does on half a tank.

I like the look of this and may well concider an EV when I finally bin my much loved R56 JCW Mini Conv. My daily commute is 44 miles half of which is motorway, something I have noticed is that Teslas, dispite there much vaunted pace, are generally driven like Miss Daisy, 65 -70 on M4 mixing it with the trucks on the inside lane. Ive seen hundreds and only once have I seen one 'making progress'. I suspect that plummeting range is the issue. I regular trips to London from Wiltshire 100 miles each way and would typically cruise at 80-90 - would a Tesla make it without a recharge? I'm guessing that the 500 would hopeless with this type of use and require 1or 2 recharges to do what the Mini does on half a tank.

I regulary drive from Derby to London at 85-95mph and arrive with about 1/3 charge left. There and back (your journey) on 1 charge would be doable at around 80-85, if you can charge 100+ would be fine. Thats in a Model 3, an S would be able to go around 20% further, though if you wait around a year the Model S range will go up another 20%.

The car will tell you if you are draining the battery too fast and suggest an average speed to arrive with 10% battery left, that speed doesn't have to be legal.

What you were seeing was that the average Tesla driver was middleaged and superchargers were less common.