BACK TO ALL NEWS
Currently reading: New Bugatti Chiron Super Sport is £2.75m hyper tourer
UP NEXT
Lamborghini to prioritise unexpected specials over retro cars

Bugatti has revived the Super Sport name for an uprated version of the Chiron, which will serve as a sister model to the recently launched Chiron Pur Sport.

The new addition to the Chiron line-up shares its mechanicals - and most of its styling - with the Chiron Super Sport 300+, a limited-run special edition based on the specially adapted Chiron that achieved a record-breaking top speed of 304mph in 2019.

Unlike that car, however, the £2.75 million Super Sport places more of an emphasis on rolling refinement. Whereas the Super Sport 300+ was presented as a lightweight and mainly pace-focused affair, the new Super Sport stays true to the Bugatti tradition of "combining top speed with absolute luxury," according to president Stephan Winkelmann. It is, he claimed, "the ultimate grand tourer".

Chief among the design revisions over the standard Chiron are a bespoke front end and a 25cm-longer rear end that optimises aerodynamic efficiency. This, combined with a revised diffuser and EB110-inspired exhaust vents on the rear wings, helps to counteract the "immense" downforce enacted on the Super Sport at its 273mph top speed. 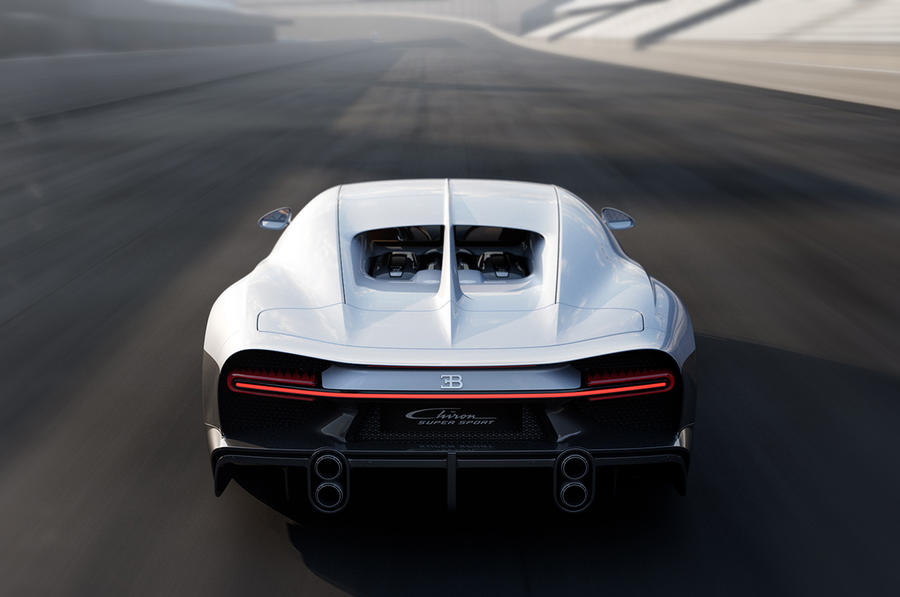 While the 30 production examples of the record-breaking Super Sport 300+ feature exposed carbonfibre bodywork, the new Super Sport is marked out by its more overtly production-focused, optional two-tone livery. Bugatti says this makes the car appear longer and "even lower".

The Pur Sport's lightweight magnesium wheels are an option, but the Super Sport is equipped as standard with a unique set of five-spoke aluminium items.

Inside, the Super Sport more closely matches the standard Chiron, with polished aluminium and leather used for most surfaces, along with elements of carbonfibre. Bugatti says it's "an interior perfectly suited to high-speed continental trips".

As with all other iterations of the Chiron, the Super Sport takes its power from a quad-turbocharged 8.0-litre W16 petrol engine, tuned to match the 1578bhp output of the 304mph car. Maximum engine speed is up 300rpm over the standard Chiron, at 7100rpm, while maximum torque - some 1180lb ft - is now available across a broader rev range.

With modifications made to its turbochargers, oil pump and cylinder heads, the Super Sport can accelerate from 0-124mph in just 5.8sec - by which point a Volkswagen Golf GTI still wouldn't be at 62mph - and is 7% quicker to 249mph (400kph) than the standard Chiron.

The chassis has been comprehensively modified in line with the car's revised styling and dual focus. The steering and dampers, for example, have been firmed up for improved high-speed stability and smoother cornering behaviour, while the bespoke Michelin Pilot Sport Cup 2 tyres are said to offer enhanced rigidity and smoothness over those of the Pur Sport.

Bugatti claims these tyres are the only tyres in the world capable of driving consistently at speeds of 500kph (311mph), thanks to a thorough post-production X-ray inspection and trials on the same testing machine used for the Space Shuttle's tyres.

Head of chassis development Jachin Schwalbe explained the effect of the tweaks: "We tweaked all possible parameters when developing the chassis in order to achieve the best possible set-up for immense acceleration, as well as the unique Bugatti luxury and comfort experience.

“In comparison to the Chiron Pur Sport, which, as a free-revving vehicle with transverse dynamics, offers a great deal of downforce up to 350kph, the Chiron Super Sport remains very neutral and quiet even above this in the uppermost speed ranges. This vastly increases the feeling of safety."

There's no question it's equisitively made and fast, but tourer?!, really?, I know it's rude to ask, but how far does a Tank of fuel last?, I suppose that whoever buys one won't ever go touring and probably flys to wherever their going.

abkq 8 June 2021
The sheer size of this Chiron suggests an ultra luxurious saloon/limosine rather than a sports car.
Especially its beautifully designed and crafted interior will make an interesting 'european contemporary' alternative to the Bentley/Rolls Royce kind of traditional british luxury.