See the new BMW’s 6-series coupe, which is set to be launched next year
Share
Open gallery
Close
Share story

See the new BMW’s 6-series coupe, which is set to be launched next year, in action in our latest spy video and pictures.

The current 6-series has been on-sale since 2003 and is based on the previous-generation 5-series’ underpinnings; the new car’s platform will be instead based on the recently-launched BMW 5-series’. Engines will be shared with the current 7-series range, although it will not take the 760Li’s V12 unit.

Unlike the current 6-series range, however, the next-generation 6-series isn’t expected to have a range-topping M6 variant. This is because the 6-series has evolved into a luxurious grand tourer rather than a sports coupe, typified by the fast yet frugal 635d launched in 2007.

The next 6-series range is instead set to be topped by an ‘is’ model, a badge recently introduced on the Z4 and 3-series models.

BMW has so far priced ‘is’ models, which are designed to sit between the standard range and M models, close to its M cars.

This has been done with a view to increasing the price of its M cars to make them more exclusive and profitable. The ‘is’ badge is expected to be rolled out across BMW’s range.

Follow us on FacebookSee all the latest BMW 6-series reviews, news and video 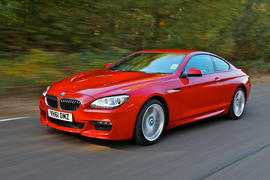 I have to say that, even as a disguised mule it looks fantastic. It's great to see BMW back on form* after the debacle of the Chris Bangle era. In fact, I wonder if I could get that paint job under the induvidual paint option !!

What's the difference between an 'is' model and an 'M Sport' model, then?