BACK TO ALL NEWS
Currently reading: New Bentley Flying Spur V8 makes public debut at Goodwood
UP NEXT
New 2023 Audi A4 Avant undergoes tests in the Alps

Bentley has introduced a petrol V8 option for its new Flying Spur saloon, following the launch of the top-rung W12 variant earlier this year.

Shown for the first time at Goodwood Speedweek, the V8-powered car is said to offer a "more driver-centric experience" than the V12, with Bentley highlighting its "more characterful engine note" and increased range between fuel stops.

It's also said to feel more agile and responsive, tipping the scales at 100kg less than the V12. The V8 model retains dynamic-enhancing systems, such as adaptive air suspension and torque vectoring, as standard and optional extras include electric anti-roll technology and all-wheel steering.

CO2 emissions are down 17% over the W12 version. Bentley has yet to confirm official figures but we can expect the Flying Spur V8 to emit roughly 280g/km. The V8 is capable of 22mpg on the WLTP combined cycle, making it around 16% more efficient than the W12. 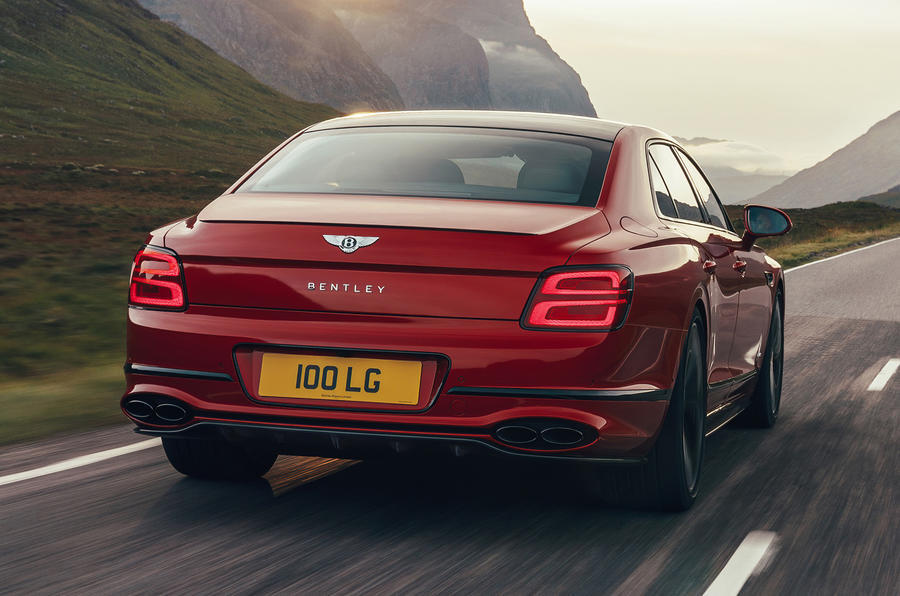 Four cylinders can be deactivated when cruising at below 3000rpm to reduce fuel consumption, with Bentley claiming that a deactivation time of around 20 milliseconds makes the switch "imperceptible" to drivers and passengers.

The interior is familiar from the existing car and can be specified in four- or five-seat formats.

Seven colours are available as standard and the car can also be specified with the 'Blackline' trim package, which swaps the chrome exterior trim for darker items. The only clues to its smaller engine are a new wheel design, V8 badges on the wings and a new quad-exit exhaust system.

The Flying Spur V8 is now available to order, with the first customer deliveries set to take place before 2021. Prices are unconfirmed, but expect the new addition to cost from around £160,000.

The now gen of multi millionaire isn't going to cough at the pathetic mpg, and all will be built to the personal whims and desires of the future owners, you can have an opinion on it sure, but, really, it's only the ones that can afford them that matter.

April fool's joke, are they? Inelegant mess of absolute what the hell, and the Continental is teh same. Remember in Predator, when it reveals it's face to Arnie? That, with a numberplate.

April fool's joke, are they? Inelegant mess of absolute what the hell

Yes hadn't noticed that before but they look like some VAG parts-bin vents from the Touran or  Q5. Shameful for a flagship

April fool's joke, are they? Inelegant mess of absolute what the hell

Yes hadn't noticed that before but they look like some VAG parts-bin vents from the Touran or  Q5. Shameful for a flagship

Yes.  That's because it is a VW parts bin special.  Bentley as enthusiasts recall no longer exists.  They are now just expensive VWs with very nice interiors.

From Jeremy Clarksons recent articles I thought he had ordered a V8 flying spur a while ago?