8
Share review
Juggles its luxury and sporting credentials very well. Not quite as well as the equivalent coupe, granted, but still hugely gratifying to drive
Share
Open gallery
Close

The Bentley Continental GT V8 Convertible: a car so big, heavy and ostentatiously appointed that you really shouldn’t be able to just ‘flick’ it around a 90deg bend so easily. Anyone looking for first-hand proof of the world-class engineering capabilities of the modern car industry could use this as a fine example of how effectively expectations can now be exploded by cars like this, surely even among those with the means to afford life’s finer things.

Approach the bend, if you will, with a spirited pace, trailing the brakes a little, and nudging the transmission down into second gear as you close in. Now just turn your head, look up the road to the corner’s exit, and smoothly roll your wrists. Some 2.3 tonnes of aluminium, steel, leather, wood, copper, fibre optics and silicon - so cleverly managed these days by adaptive air suspension, active anti-roll bars, torque-vectored four-wheel drive and enough computing power to run a cold-war submarine - then declines to lean, waver or resist much at all, but rather rotates so willingly that it’s as if the world itself were pivoting right beneath your backside. Why haven’t the cows in that field just fallen over, you’ll wonder. Must have been the car after all.

Truth is, whether open- or closed-cockpit, V8- or W12-engined, the latest Continental GT is a car capable of remarkably agile handling. If you do like a sporting grand tourer, however, that immaculately coiffed Bentley salesman really ought to be recommending the V8. Not only is it lighter than the W12, but it’s also tuned for slightly keener handling and a more stirring exhaust note.

It’s long been Autocar’s preferred Continental, too. And it’s still sufficiently well endowed to hit 60mph from rest in four seconds flat, even in the convertible-bodied form in which we’ve just tested it in the UK. 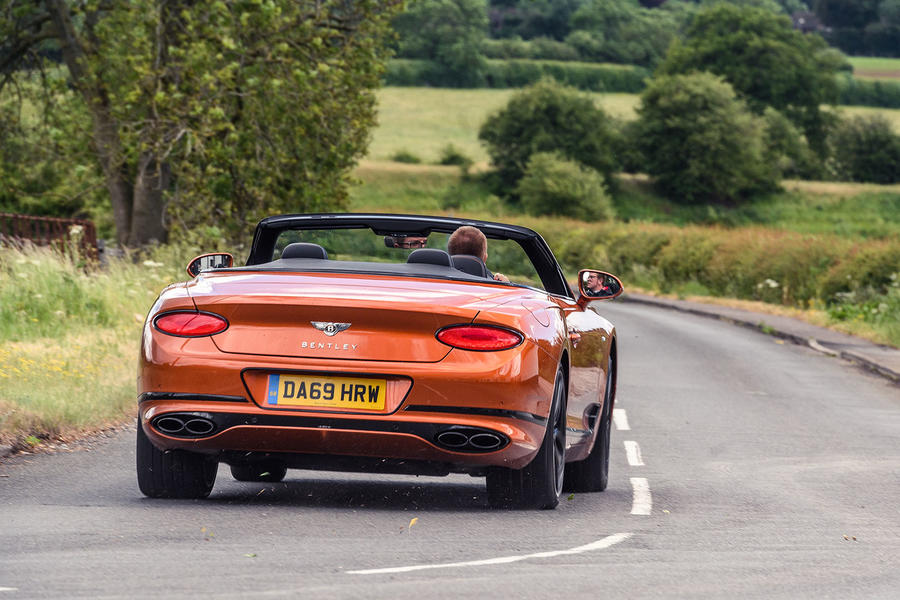 Like the equivalent Coupé, the GT V8 Convertible has a four-seat cabin; unlike it, the cabrio uses a motorised cloth hood to keep the wind and rain out and it can be converted from open to closed at the touch of a button at speeds of up to 30mph, and in a little less than 20sec.

The need to accommodate the folding roof denies the convertible some of the rear cabin space of the coupé. Although space is still good enough, and roof-up access still easy enough, for younger kids to travel back there, adults won’t want to for long.

Up front, where adults tend to travel instead, the Continental oozes with material lavishness and tactile allure as only a Bentley can. Crewe’s storied touch with walnut and hide and classic controls and instruments finished with decorative brightwork have lately been combined with LED ambient lighting and digital touchscreen technology in a marriage that few would have imagined could be so harmonious. But it really is. The car’s digital speedo and tacho dials are so beautifully rendered that you won’t notice they’re ‘not really there’ until they disappear from view. Meanwhile, if you simply don’t want to look at the widescreen infotainment touchscreen, you can rotate it back inside the dashboard and look at a row of old-fashioned clocks instead.

The specific quantity of strengthening ballast carried by the convertible over and above the mass of the coupé is 170kg, which ought, on a 2.3-tonne car, to be shouldered pretty matter-of-factly, one would have thought. The powertrain of the modern Conti GT certainly motivates that weight without the slightest trouble. There is, however, a minor but noticeable price to be paid on rolling refinement with the drop-top. Whether you’ll be minded to pay it, or even notice it, will likely depend mostly on the particular style of luxury motoring you like to do. 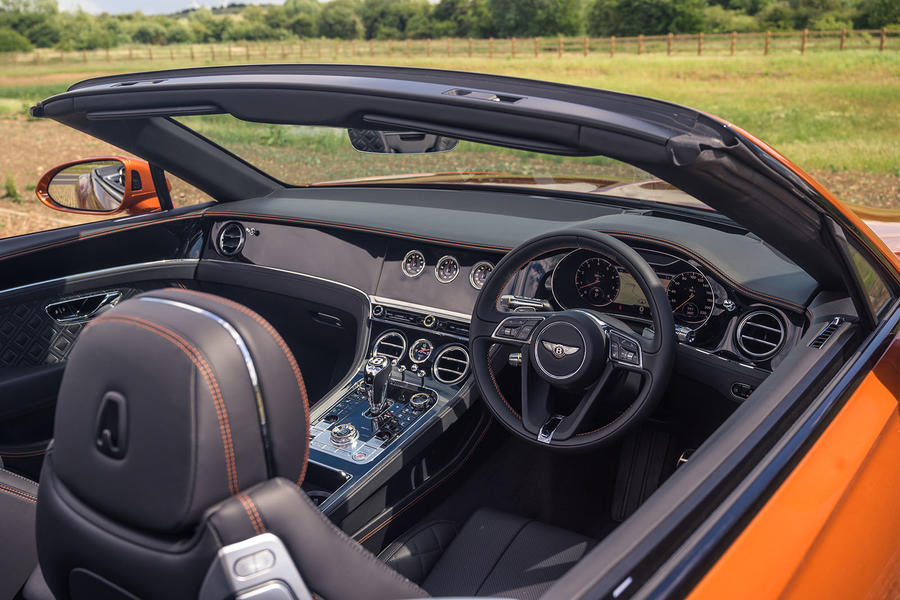 Prod the gold-ringed starter button on the transmission tunnel and the V8 registers its distantly fruity audible presence, which you can bring notionally closer to your eardrums in this instance by exposing all to the open air, of course. Very nice. Rotate the surround of that same button and you can choose between several ‘set-menu’ drive modes.

The actuation of the car’s dual-clutch transmission still seems just a little bit laboured at times; not between gearchanges so much as when manoeuvring, and juggling drive and reverse. The rest of the time, however, the powertrain is highly convincing. It has all the accessible grunt and outright performance that a luxury tourer needs, and much of the responsiveness, audible charm and willingness to rev that Bentley’s W12 lacks.

As regards handling, if you opt for a car with ‘Bentley Dynamic Ride’ active anti-roll bars (as our test car had) you’ll find there’s quite a marked difference in cornering potential as you move from Comfort to Sport mode. The latter keeps at least 80% of torque at the rear axle all the time and also really sets the suspension to work. Steering ranges from light to medium light, and it filters out many more of the forces acting on the front wheels than it communicates to your palms, as you’d expect it to. Even so, this is a heavyweight luxury GT that, assuming you keep within the car’s considerable limits of grip, somehow changes direction with the freedom and balance of a compact sports saloon. You’re never clear exactly how and where the car’s finding the reserves to manipulate itself around a tight bend, and you feel as much like a witness to what’s going on as an agent of it, true. Still, it’s quite something to witness.

And what of refinement? Well, sure enough, Sport mode does stress the car’s chassis to the point where it admits the odd very gentle shake and shudder over uneven surfaces. ‘Bentley’ mode offers what’s probably the best compromise of body control, handling agility and ride compliance.

Even Comfort mode can’t quite give the cabrio the same sense of hewn-from-solid structural integrity and ride comfort that you’ll find in the equivalent coupé, though. And while the car’s roof does a good job of keeping wind noise down at speed for a cloth hood, it may not be capable of quite the isolation you’d want in a six-figure luxury GT. 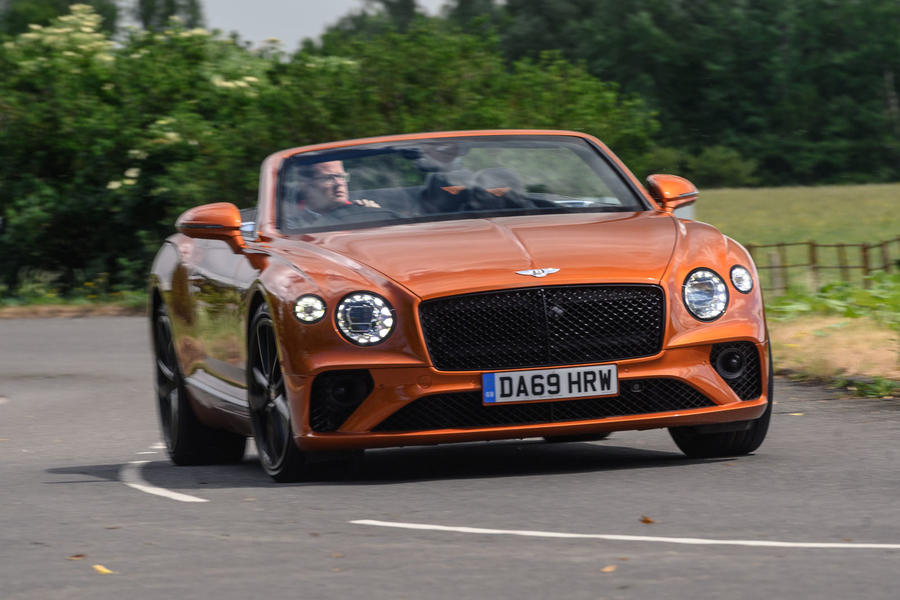 Depends on the particular vision for luxury grand touring you’ve got in mind.

If, to you, special occasion motoring means getting out among the elements and awakening the senses, having the roof down so often will likely prevent you from noticing what separates the modern Continental GT Convertible from the Coupé anyway. This would be a sublime vehicle in which to get lost on a summer day; it's considerably more usable than some drop-top exotics; and the fact that it can handle as well as the equivalent coupé is a tribute to the engineering behind it.

But if your vision of automotive luxury, like mine, would always include the elegant roofline of a fixed-head coupé rather than the relatively messy profile of a cabrio, as well as the superior bubble of glorious on-board isolation that a coupé might afford, well, you’ll instinctively know where to put your money.

If you've got your heart set on a luxury convertible, of course, being advised to buy a coupé instead may be about as helpful today as it ever wasn't. The simple truth is there are very few richer or more opulent luxury convertibles than this for any outlay.

Even at this rarefied level, though, and even in 2020, it seems the luxury, open-top motoring experience still doesn’t come entirely without compromises. The better you know them before you commit, I guess, the happier you're ultimately likely to be. 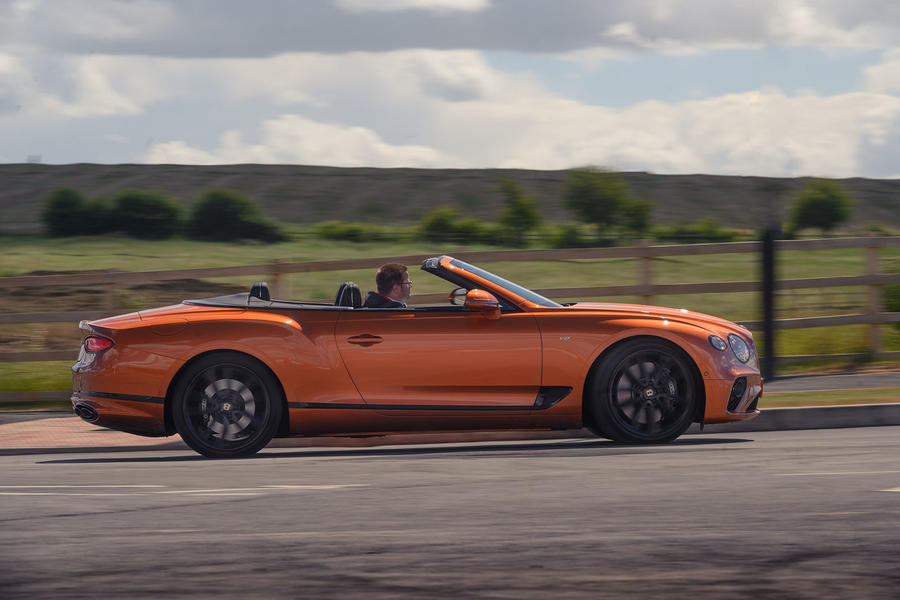 Glad they sorted the Bentley's rear end, never liked the original and. If they really have sorted the handling, it bodes well for when they finally dump the ICE.

It uses crease lines as a

It uses crease lines as a stylistic device, a cheap trick which no car at this price range should resort to. True luxury should be about volume, surfaces, and proportion, like Rolls Royce, like Bugatti.