Despite the impressive global success of the Bentley Bentayga since its launch in 2016, its maker has always been a bit concerned about the public reaction to the styling of its SUV flagship.

Much of the noise has melted away now that global sales have passed 20,000, but persistent voices have continued to criticise the Bentayga’s bulk and outline – even though this fastest-selling Bentley in history continues to dominate a class whose size has trebled in four years.

However, these days the health and strength of the opposition must also be closer to the front of Bentley's marketing minds. Crewe’s SUV has lately been joined by the Rolls-Royce Cullinan and Lamborghini Urus – both counted as big successes by their makers – and the world market for top-end off-roaders has rapidly grown from 4000 units to more than 11,000, with the Aston Martin DBX now arriving to push it further. Small wonder Bentley has launched such a thorough collection of 2020 Bentayga updates, running to more than 1000 individual changes.

Fittingly, Bentley’s list of improvements starts on the outside, many of the details reflecting a new design era that arrived with the latest Bentley Continental GT and Bentley Flying Spur saloon. The grille more closely reflects their influence; it is bigger and more upright, the lights are lifted in the front wings and take on an exotic, elliptical shape, with Bentley’s signature cut-crystal design style even more prominent inside the glass cover.

At the rear there’s a cleaner, new-shape tailgate that allows a pleasantly uncluttered space for new elliptical tail-lights, whose shape is echoed in similarly shaped exhaust outlets. The numberplate looks much better in a new aperture in the lower bumper. Along the lower body sides are more prominent and stylish light catchers, and the rear roof spoiler is extended. Finally, the car’s stance has been adjusted so its new-design 22in wheels more fully fill the wheel arches, and there’s a 20mm increase in rear track that also benefits the Bentayga’s handling as we’ll see later.

The overall effect, according to exterior design boss JP Gregory, makes for a bolder machine with a more modern aspect that sits more comfortably on its large wheels. Bentaygas are big, but the proportions are now so good that from a distance you could almost call this machine compact.

There can’t be many original Bentayga owners who were critical of the model’s beautifully detailed interior, yet the changes for 2020 are considerable. The centre console’s edges have been extended into the cabin to improve looks and central carrying space, and two of Bentley’s trademark eyeball vents have been replaced by a new winged vent on top of the dash, inspired by the Bacalar concept and incorporating the analogue clock. 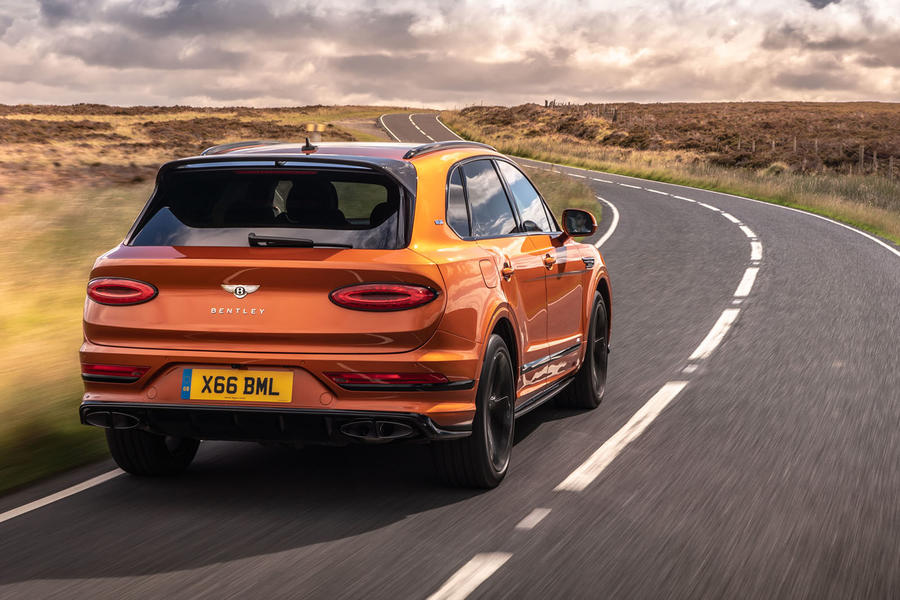 The driver now gets a head-up display, plus a bigger screen between and traditional twin dials (now digital as in GT and Spur). There’s a new switch panel on the centre console, below the new vents, with hard keys for owners who prefer not to operate the infotainment system via the (larger, lighter and more responsive) touchscreen above.

Like the Conti and Spur the system now carries its own sim card that connects automatically to your phone. Head of interior design Darren Day says Bentley research has shown that this feature encourages owners to make much better use of the car’s many other real-world functions. The Bentayga’s seats have all been redesigned for a new look. In cooled versions, the leather perforations reach to their very edges for better effectiveness in summer and there’s a new double-seam interpretation of Bentley’s characteristic quilted trim design.

The second row seats (offered as before in two- or three-person layouts) have a new frame that affords around 30mm more knee room when occupants are sitting normally, or 100mm when newly provided extra reclining is used. Rear passengers also get a new remote controller for functions such as air-con, seat massage and hi-fi, and as before a third row is available to make your Bentayga a seven-seater.

Among other practical updates are matrix headlights with 48 LEDs each to shape the Bentayga’s light pool on high beam to avoid dazzling oncoming drivers and “wet arm” wipers with 22 jets that make a more efficient job of windscreen washing.

Bentley is launching the 2020 Bentayga as a 4.0-litre V8 first, using its familiar 542bhp, 32-valve petrol V8, complete with a pair of twin-scroll turbochargers neatly packed inside the vee of the engine. The 6.0-litre W12 Speed model will come later, while the promised V6 plug-in hybrid will start first in the UK, Europe, the US and Japan. 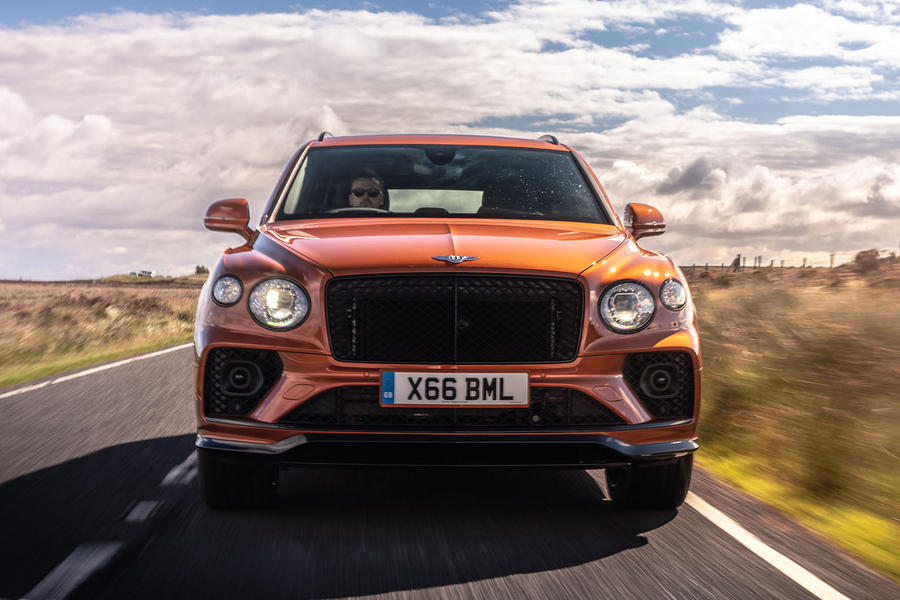 Mechanical changes are few, so the new Bentayga feels hearteningly familiar on the road. It is big and wide, of course, but as soon as you start driving, your memory of the refinement, the lack of noise and vibration and that special feeling of wellbeing that seems to go with high-riding SUVs come flooding back.

The V8 emits the distant exhaust woofle that makes it more desirable to some than the 6.0-litre W12 (given that both have as much power as you could possibly need in a large SUV). With a 0-60mph time of 4.4sec, copious traction via a clever 4x4 system, an air suspension system that offers four air-suspended ride heights, plus a 48V active-roll control system, the latest Bentayga continues to deliver handsomely on the original model’s promise of versatile high performance.

Once you’re rolling, the eight-speed gearbox deploys the torque so intelligently you’re barely aware it is working. You have shift paddles, a mode control and a sensitive and predictable kickdown to encourage extra action, but such gadgetry is hardly necessary. And as usual, the 'Bentley' driving mode is the one to go for. Others don’t strike quite such a happy compromise across the suspension, throttle, engine and transmission.

A few things are different. The seats have better side support, though like the dashboard array, you weren’t aware of a shortfall in the previous iteration. One welcome change, still subtle, comes from a small but critical increase in rear track. The steering now feels a shade more precise and even less affected by bumps, a particular benefit on narrow roads where it’s necessary to drive close to a nearside kerb or hedge. Two things give particular driving pleasure: the steering precision and the car’s ability to absorb severe-looking bumps with calmness and poise.

Not that the Bentayga is quite perfect. Our test car, on 22in wheels, seemed to generate more motorway road noise than we remember – a disappointment because high-riding cars are usually less prone to this than sportier machinery that travels closer to the road. It’s not terrible; just not as impressive as we had hoped.

The other standout fault is familiar from many a big-engined car: a slowness to respond to the throttle when you’re accelerating from rest at intersections. It’s so sluggish, and seems to need such a decisive shove (unlike the rest of the controls) that you’re inclined to squeeze the accelerator to get going, feel precious little response, so give it more just as the car responds to your first request, which yields too much urge and makes the whole thing untidy. In a machine whose every other mode of driving is smooth and graceful, this seems an issue that needs solving. Especially when more of us drive electric cars these days and are used to clean departures. We must hope the electrically assisted PHEV model will be better. 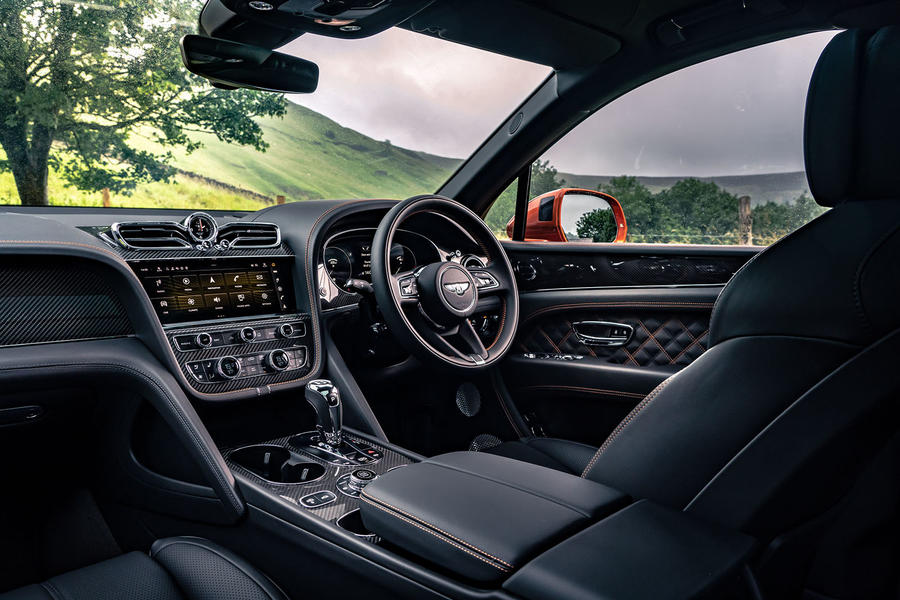 Still, the 2020 Bentayga is an all-round brilliant machine, delivered at a level of build quality that most of us would see no way to improve, which in turn makes the price seem entirely reasonable.

Bentley is all too aware it now has a hard-won market position to defend, and has built the machine to do it. 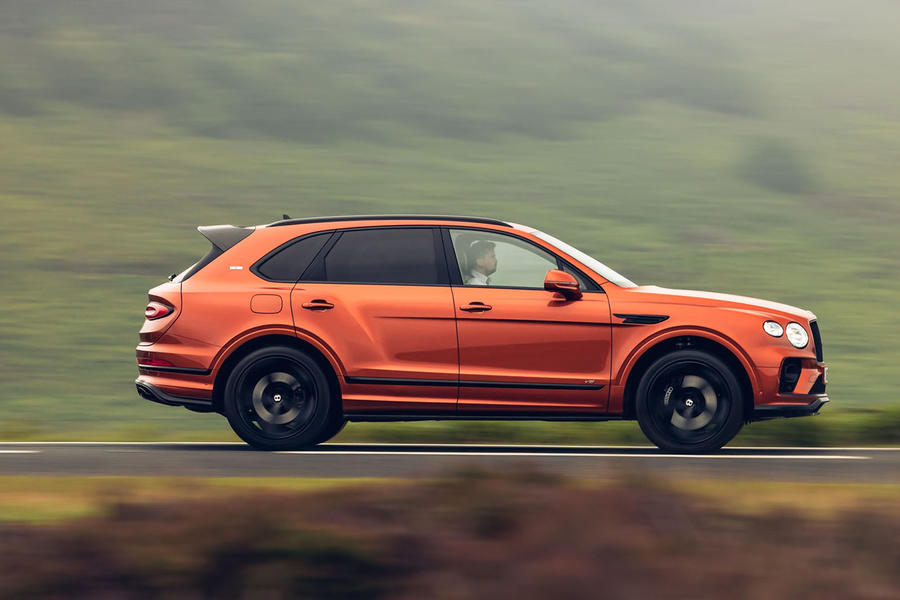 Steve Cropley wrote "Especially when more of us drive electric cars these days and are used to clean departures."

How many motorists drive electric cars?  How many are used to clean departures?

What a load of rubbish,

Mr Cropley will write anything provided he gets his long-term test car for six months free of charge.  I suspect a Bentayga waiting in the wings........

Unlike some comments I like the new "hey I'm here design".One thing I notice is that unlike Mercedes who have gone,in my opinion, way off the planet with the dashboard,(yes I am of a older demographic) and maintained a very sensible set up, which is pleasing to the eye and looks like it has all necessary items within easy reach.This applies to the bland Tesla set up and the traditional Jguar setup in the IPace.

That makes it stand out, I've seen one or two, both in a boring shade of Grey, this colour makes it more interesting, easier on the Eye.