Audi continues to grow its Sportback range of coupé-style SUVs, with the mid-sized Q5 the latest model to gain a more rakishly styled body option.

Following the recently launched Q3 Sportback and the larger, electric E-Tron Sportback, the new addition to the range has been completely redeveloped from the B-pillar backwards and features bespoke styling elements throughout which further set it apart from the recently facelifted standard car.

The front end, for example, receives a Sportback-specific grille with a new honeycomb-style design - which Audi claims brings it into line with its S performance models - and bespoke metallic inserts on the top-rung car. The Q5’s new LED headlights have been carried across, and sit above unique air intakes in the lower bumper.

From the side, the Sportback is most obviously marked out by its sloping roofline and tapered rear window, while the lower body line has been pulled up to make the car appear visually longer. A new set of 21in Sportback-specific alloy wheels have been added as an option.

Audi’s new OLED rear lights feature at the rear, and protrude slightly further than on the standard car to increase the Sportback’s overall length by 7mm. Buyers can choose from three different rear light signatures, and the Q5’s new proximity warning system will illuminate all rear lights if another vehicle comes within two metres. 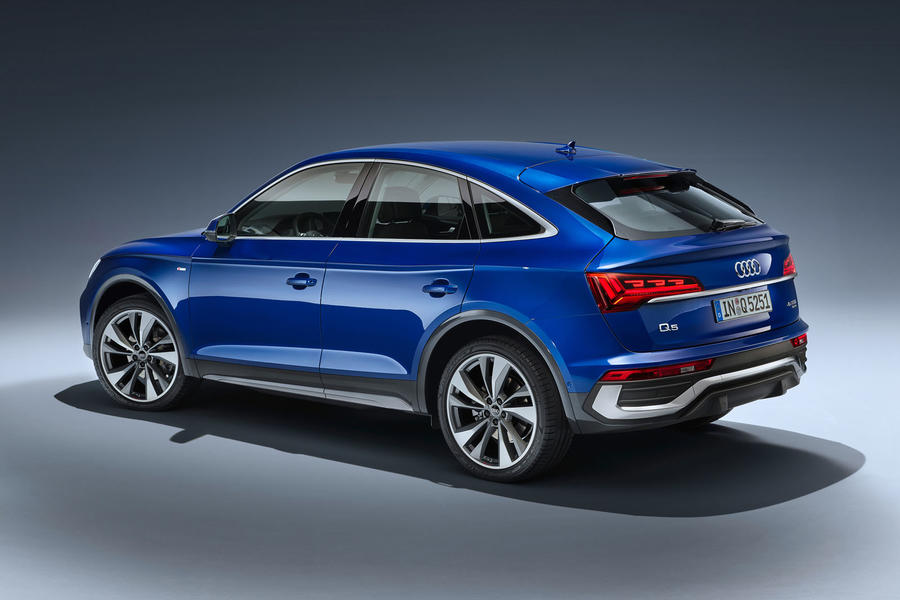 From launch, the new model will be offered with the Q5’s 201bhp 2.0-litre turbocharged diesel option, equipped with mild hybrid technology and paired with a seven-speed dual-clutch automatic gearbox. Forthcoming powertrain options include a second 2.0-litre TDI option, a diesel V6 and a pair of four-cylinder TFSI petrol options. A plug-in hybrid TFSI-e and SQ5 performance range-topper will soon complete the line-up.

The six-cylinder options are equipped with Quattro permanent four-wheel drive, while the four-cylinder cars only send power to the rear axle when necessary. The entry-level diesel option will be front-wheel drive only.

The Sportback is equipped as standard with the Q5’s sport suspension package, and can be optionally upgraded to the adaptive air suspension system, which offers 60mm of ride height variation to improve ride quality over rough terrain and improve handling at higher speeds.

The cabin is largely identical to that of the standard car, though space in the rear is slightly reduced by the lower roofline: boot capacity is down from 550 litres to 510, though that increases to 1480 with the rear seats folded down, and rear passengers lose between 1-2cm of headroom.

The Q5 Sportback can be equipped with the optional ‘rear bench seat plus’, which allows the rear seat backs to recline and for the entire bench to slide backwards and forwards, enhancing boot space.

The Q5 Sportback will be assembled in Mexico, with deliveries set to get underway in the first half of 2021. UK specification details remain unconfirmed, but expect prices to kick off at around £45,000 for the entry-level car.

I drive an A5 sportback

I drive an A5 sportback currently and would happily consider one for my next car.
Rods 27 September 2020

But it will still sell...

Surely they could have made it look at least a little more dynamic, though.

I wonder how many people who

I wonder how many people who will lease these will realise that their so-called premium German car is actually made in Mexico??

Jeremy, what has that got to

I wonder how many people who will lease these will realise that their so-called premium German car is actually made in Mexico??

Im guessing the same number of people who know their 1.5 diesel Mercedes A class is powered by an engine also used in a Dacia Duster or the 1.3 Petrol from a Renault Clio.