BACK TO ALL NEWS
Currently reading: New Audi Q5 costs from £37,170
UP NEXT
Analysis: winners and losers in the automotive CO2 race

Prices and specs of the new Audi Q5 have been revealed, following the car's reveal at the Paris motor show last year.

Audi's second-generation BMW X3 and Mercedes-Benz GLC rival is closely related to the latest A4 saloon, and has been engineered from scratch to reduce weight.

Key to that weight loss is the adoption of VW Group's MLB platform - already used by the A4 and the larger Q7. The new Q5 is close to the old model in size, but incorporates better packaging to improve interior space. The new Q5 is also one of the most aerodnamic cars in this class, and Audi is promising 'exceptionally' low wind noise and very little vibrations in the cabin.

The exterior of the Q5 has been given a more rugged appearance than the current car, in order to amplify the car's off-road credentials. Clear influences from the Q7 and smaller Q2 can be seen, particularly around the front of the car. Its headlights come as either LED or high-resolution Matrix LED depending on specification, and Audi's dynamic turn signals also feature. Inside the five-seat cabin, buyers will be able to opt for Audi's 12.3in Virtual Cockpit display - already in use on a wide variety of models - as well as two different infotainment screens. A 7.0in free-standing screen will feature on the standard car, while range-topping models will get a larger 8.3in screen. The system is controlled via a rotary dial and touch pad. Top-end versions also include haptic feedback. A newly developed head-up display is on the options list, and can project relevant information directly onto the windscreen.

The new Q5 will come with a range of four-cylinder and V6 petrol and diesel options, with most engines carried over from the A4. The V6 motors are part of a new generation of enignes jointly developed between Audi and Porsche. Also planned is a plug-in hybrid version of the Q5, to satisfy the growing demand for hybrid SUVs. That model will feature a 2.0-litre four-cylinder petrol engine working in combination with an electric motor - it's said to have an all-electric range of up to 31 miles, as previewed by the Audi Allroad Shooting Brake concept car. 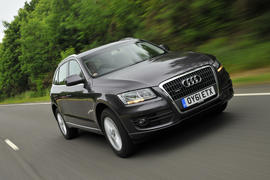 Audi also wants to offer buyers more performance-oriented options. Both SQ5 and RS Q5 versions of the car will be made, with the former getting 349bhp from its 3.0-litre V6 diesel engine, and the latter getting close to 500bhp from a twin-turbocharged version of the same engine. Some versions can be specified with Audi's 'ultra' technology, which disengages the rear axle when it's not needed, boosting efficiency. Torque vectoring features in all versions of the Q5, while a sports differential can be optioned for the V6 diesel.

Buyers will be able to choose between front and four-wheel drive, and between six-speed manual, seven-speed dual-clutch automatic and eight-speed torque-converter automatic gearboxes.

The new Q5 is underpinned by new five-link front and rear suspension, with steel springs and adjustable dampers, in a setup largely borrowed from the A4. Optional air suspension will also be offered - including a self-leveling feature borrowed from the Q7 - in a bid to improve its ride and enhance its towing ability. As standard, drivers can choose from seven different driving modes via Audi's Drive Select system, with two new modes for offroad driving.

The 2017 Audi SQ5 has now been revealed in Detroit. Click here for more

Buyers will be able to choose from 14 exterior colours, and five new trim levels - sport, design, S line, design selection an S line exterior package. Those packages also include elements to distinguish the car's exterior, such as contrasting grey elements to empahises the car's rugged nature on design line models. Standard equipment includes a new multi-function steering wheel, while the options list includes a heated wheel, and massage functions for the seats. Optional ambient lighting can light the car with 30 different colours. The standard car sits on 17in alloy wheels, but alloys of up to 21in can be offered.

While the previous Audi Q5 was already praised for its big boot, Audi has inceased space in the new model to a maximum of 610 litres with all five seats in place, and 1550 litres with them folded away. Loading heavy items is helped by a sensor-activated boot, and the car's air suspension can be lowered.

A powered tailgate is standard across the range, as is Audi's parking system, three-zone climate control and heated front seats. Speaking at the new car's debut in Paris, Audi boss Rupert Stadler said: "The first Audi Q5 was for many years the world's best-selling SUV in this class. It was no easy task to design its successor, but that is precisely why it is so exciting. "With the new Q5, we are setting the bar a notch higher. Among the great innovations are the quattro drive system with ultra technology, highly efficient engines, the air suspension with damper control and a comprehensive line-up of infotainment and assistance systems."

The Q5 will be built at Audi's newly constructed factory in Mexico.

Price Up - Spec Down

They've increased the prices and reduced the spec level. Leather is now an option! I've got an SQ5 with options; to spec a 2.0 TDI new Q5 to the same specification would only be £2k less than I paid for an SQ5 which makes no sense. Plus the new road tax rules of anything over £40K is going to hurt sales of Q5's and many other cars at this price point. Sticking to my old shape SQ5 for a while longer thats for sure. I would imagine the price of the new SQ5 is going to go up by at least £10K by looks of it. Maybe a Seat Ateca Cupra next me thinks.
AlanMac44 13 January 2017

Price Up - Spec Down

They've increased the prices and reduced the spec level. Leather is now an option! I've got an SQ5 with options; to spec a 2.0 TDI new Q5 to the same specification would only be £2k less than I paid for an SQ5 which makes no sense. Plus the new road tax rules of anything over £40K is going to hurt sales of Q5's and many other cars at this price point. Sticking to my old shape SQ5 for a while longer thats for sure. I would imagine the price of the new SQ5 is going to go up by at least £10K by looks of it. Maybe a Seat Ateca Cupra next me thinks.
JJ 1 October 2016

"Such a self-referential muddle of Audi cues that it risks disappearing up its own exhaust pipe".

Just a dumpier-looking version of the old one.

A step sideways on the looks front, I'd say, rather than an "evolution" of any sort.