Audi's four-seat coupé was initially unveiled ahead of its public debut at the Los Angeles motor show in November, and goes on sale today. First deliveries are expected in the summer.

Sporting a sharp new exterior design, the luxury liftback comes with a 48V electric system, new engines with mild-hybrid properties for added fuel savings, as well as a steel and aluminium body structure. The BMW 6 Series Gran Turismo and Mercedes-Benz CLS rival gets a reworked chassis featuring four-wheel steering and a raft of digital interior functions as part of an engineering overhaul.

Along with the latest A8, the 2018 A7 represents somewhat of a new start for Audi, following the fallout from parent company Volkswagen’s Dieselgate scandal. Initially approved for production by Audi boss Rupert Stadler in 2014, the A7 has been developed under three research and development chiefs: Ulrich Hackenberg, Stefan Knirsch and Peter Mertens. 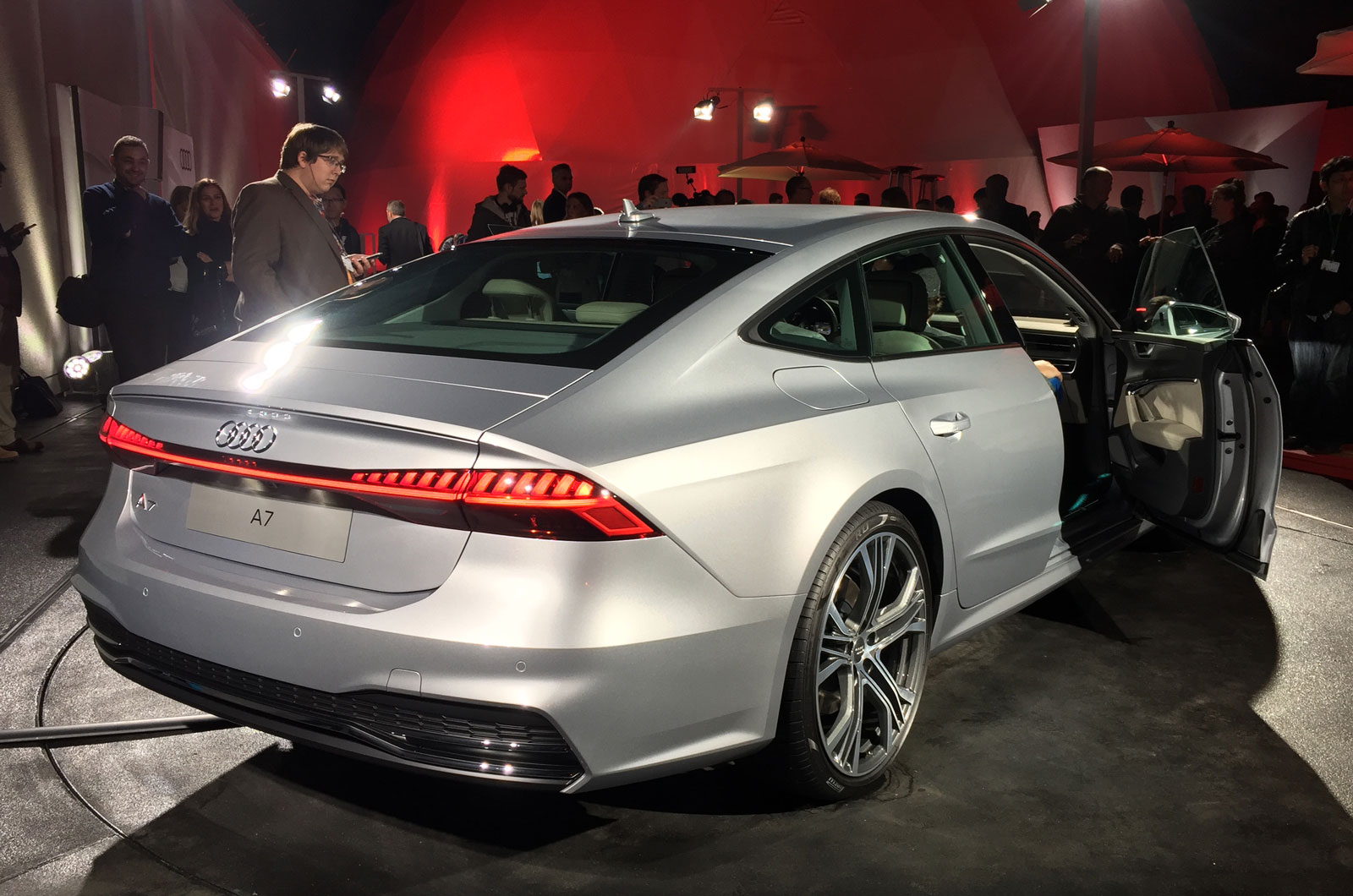 Audi says the A7 has been refined to offer outstanding long-distance-cruise traits, and also says its reveamped interior will boost its appeal. And with just one model planned for production from the outset, the A7 55 TFSI pictured here officially for the first time, it also appears Audi is taking steps to ensure top-notch quality during the initial build phase.

Stylistically, the new A7 continues the theme established with the first-generation model in 2010, but with tauter surfacing and crisper forms. The five-door layout remains; the cabin doors are once again frameless, while the large tailgate hinges from above the rear window to provide unimpeded access to the luggage compartment.

The front end is dominated by the latest evolution of Audi’s single-frame grille, as seen on the recent A8. It is set within a heavily structured front bumper and is bookmarked by angular headlights sporting distinctive LED graphics in one of three designs, which taper back within the leading part of the front wings. 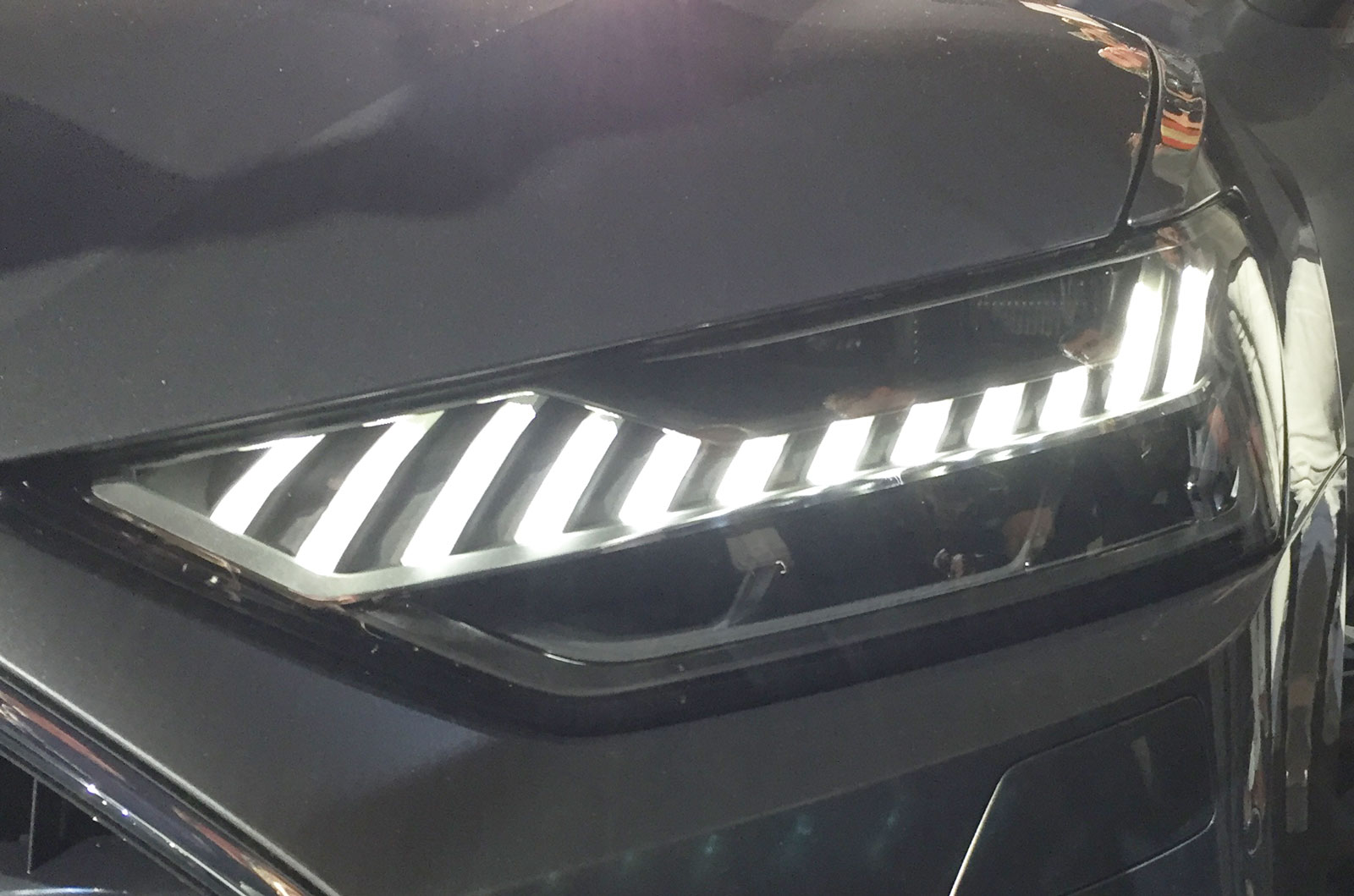 Further back, there are pronounced front wheel arches, a relative shallow six-window glasshouse, heavy swage lines within the lower sections of the doors and a roofline that slopes heavily towards the rear – all in keeping with the original A7.

At the rear, Audi has provided its latest model with an active spoiler element. Integrated into the trailing edge of the tailgate, it deploys at speeds above 75mph to increase downforce on the rear axle for added high-speed stability. The most dominant styling feature is the full width tail-lights treatment: each tail-light receives 13 individual elements, joined by an illuminated light bar that stretches across the rear of the boot lid.

Audi will offer the new A7 with an optional S line styling package from the outset of UK sales. It features a high-gloss-black treatment on the grille insert, front air ducts, sills and rear diffuser. 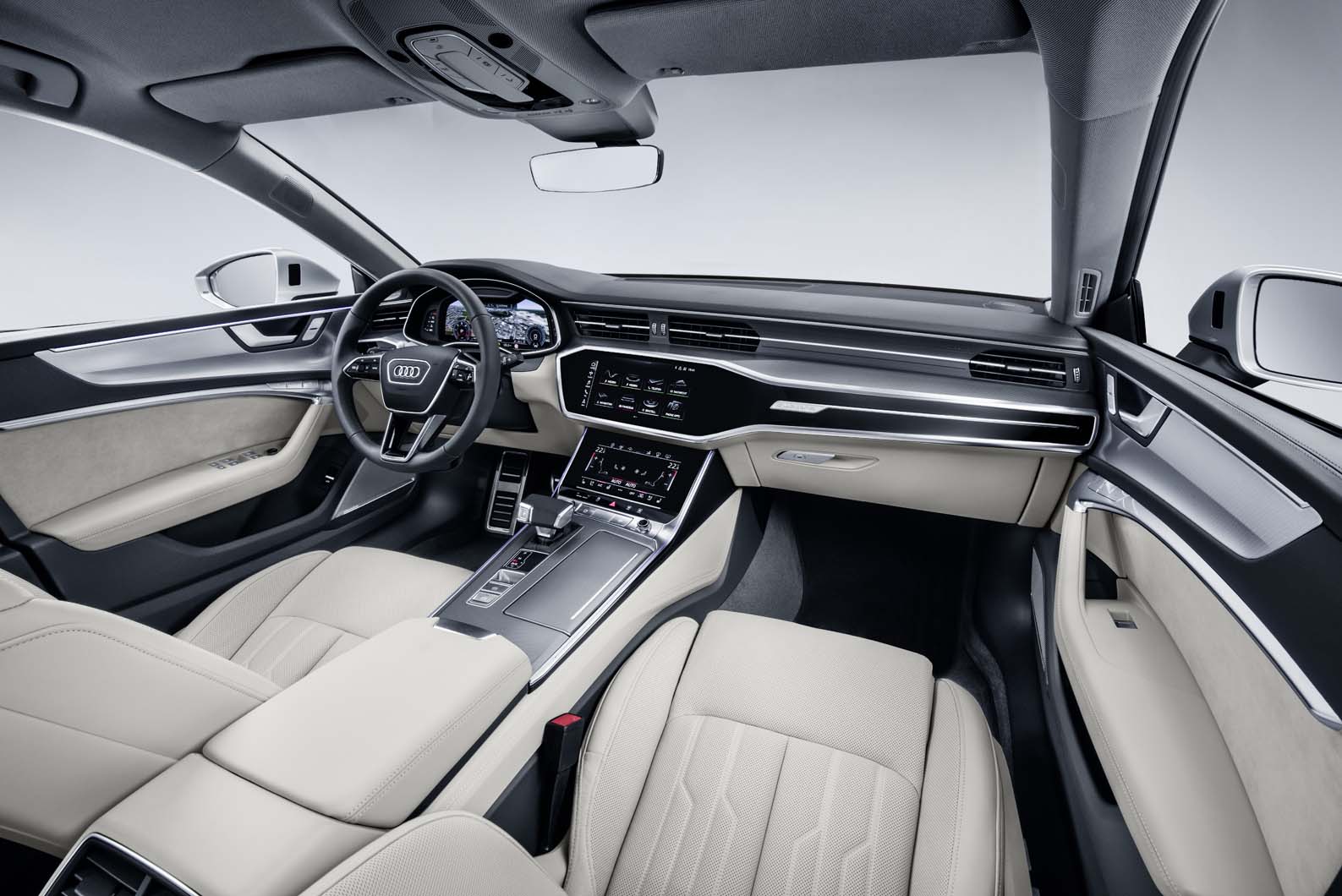 At 4969mm in length, 1908mm in width and 1422mm in height, the new Audi is 14mm shorter, 3mm wider and 2mm higher than the first-generation A7. Based around the latest evolution of Audi’s MLB platform, it also adopts a wheelbase that is 13mm longer than its predecessor at 2923mm, providing it with a larger footprint that will be shared with the new A6.

The interior of the A7 follows the lead of the latest A8. There is a 12.3in digital instrument display, combined with a 10.1in Multi-Media Infotainment display integrated within the centre of the dashboard facia and an 8.6in display unit mounted lower down at the base of the centre console – both offering standard touch control, with haptic and acoustic feedback qualities. 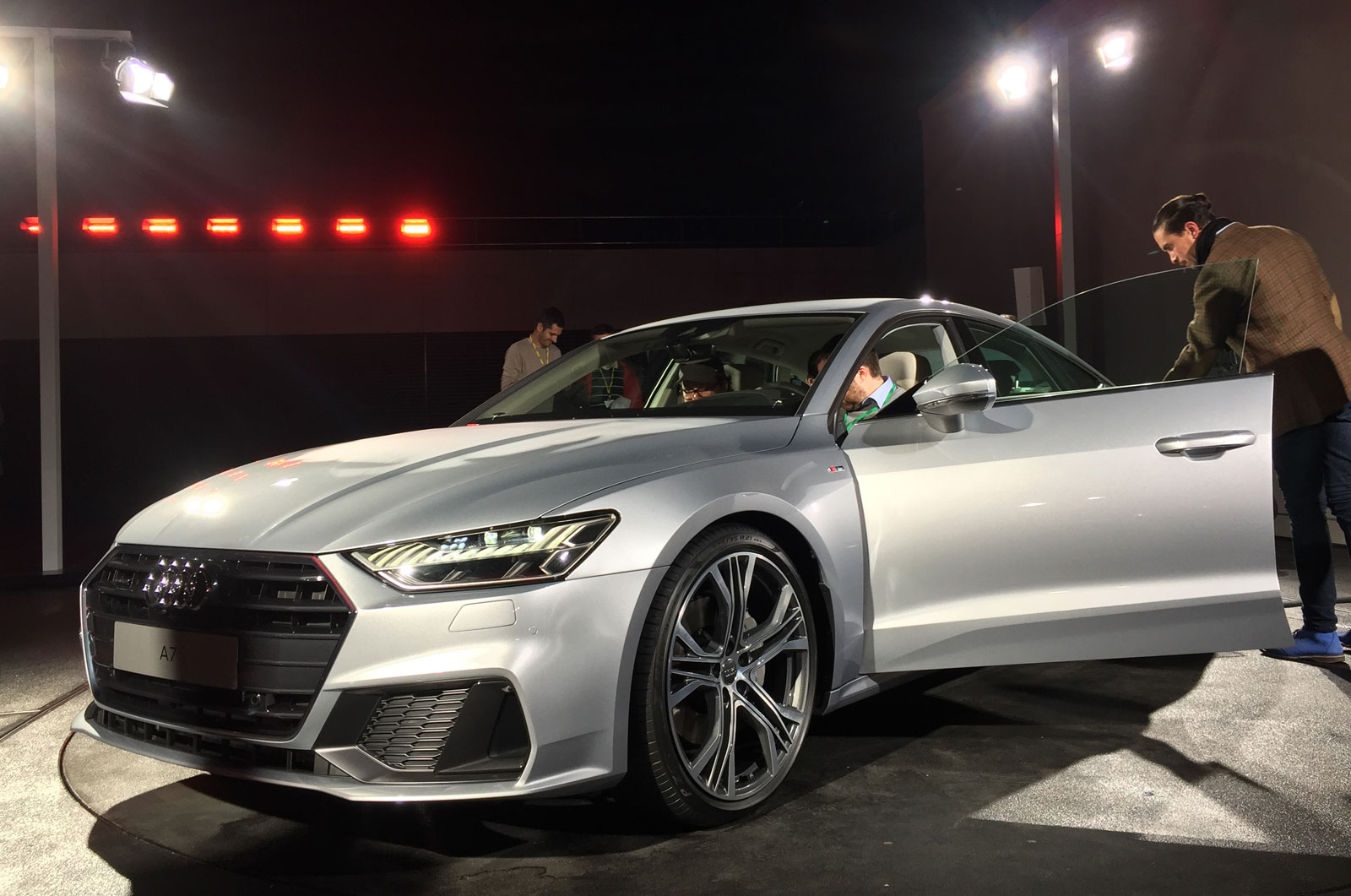 The adoption of touch-sensitive displays for all the major functions provides the dashboard with a clean and uncluttered look devoid of traditional manual controls. The stubby gearlever, meanwhile, is designed to allow the driver to rest their wrist on the horizontal handle to ease the touch operation of the air conditioning and other functions, according to Audi.

Up front, new seats are claimed to offer added levels of comfort, with buyers able to specify multi-adjustable, customised contour seats with both ventilation and massage functions. The rear can be configured with two individual seats or a two-plus-one layout. Despite the 14mm reduction in the length of the exterior, Audi claims improvements in packaging have liberated an added 21mm of length within the interior and, with it, increased rear leg room.

The 535-litre boot capacity of the original A7 has been retained, although Audi says the luggage compartment has been redesigned for improved utilisation of space. The rear liftback is manually operated, although buyers can choose an optional foot-operated sensor. 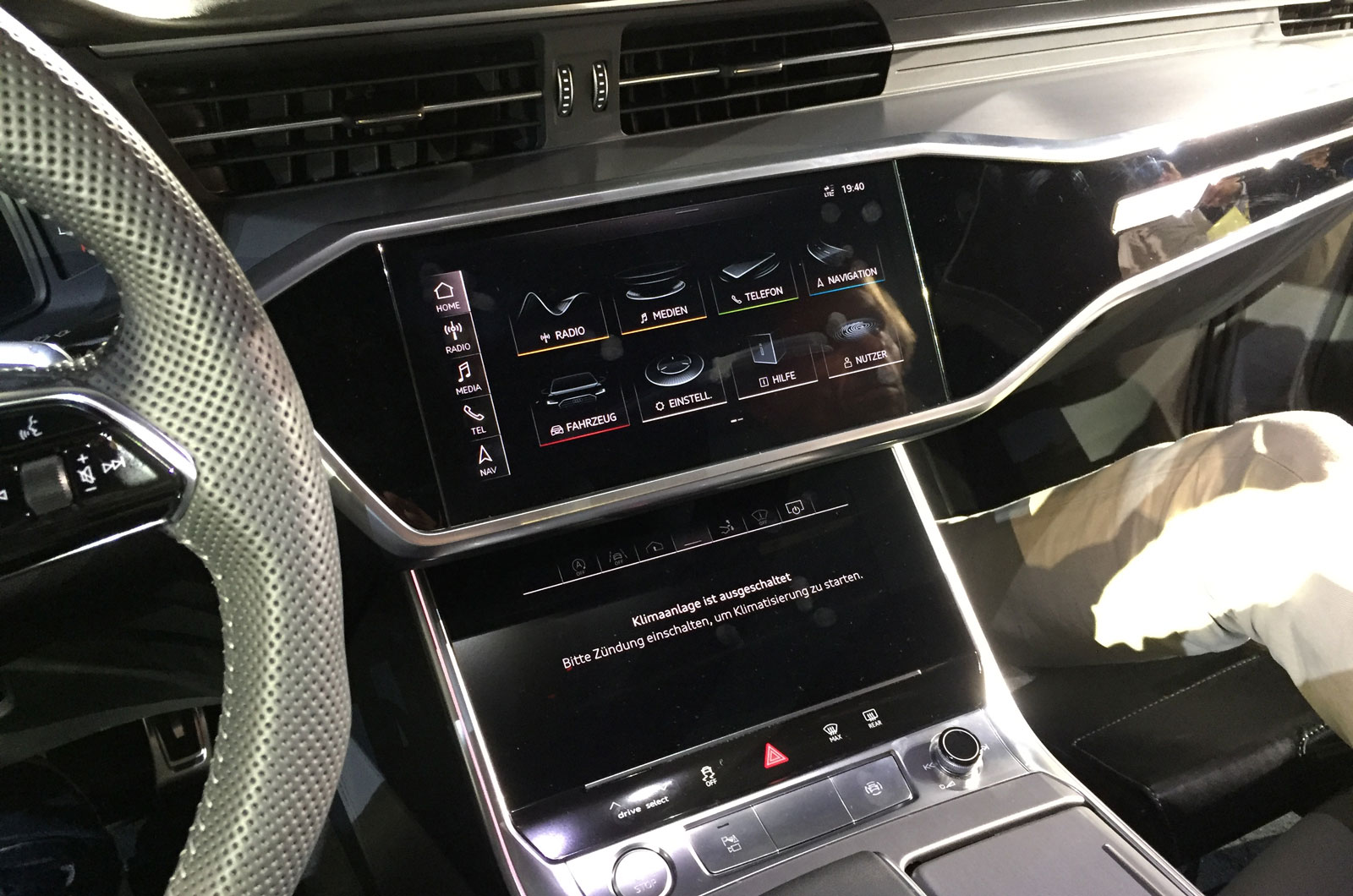 Options include Matrix LED headlamps with laser projector units, a head-up display unit, voice control, four sound systems including a Bang & Olufsen unit offering 3D surround-sound, remote parking pilot and, from 2018 onwards, remote garage pilot. The remote garage pilot autonomously manoeuvres the A7 into and out of parking spaces or a garage without the need for a driver to be behind the steering wheel.

That technology is among a number of autonomous driving functions. The new A7 can feature up to five radar sensors, five cameras, 12 ultrasonic sensors and a laser scanner. They are networked by a so-called zFas central driver assistance controller. In total, the new car features 39 driver assistant systems, both as standard and optional.

The second-generation A7 will be launched with just a single engine, although others, including both four and six-cylinder petrol and diesel units, are planned to be added to the line-up as production of the four-door ramps up at Audi’s plant in Neckarsulm, Germany.

The turbocharged 3.0-litre V6 petrol unit comes as standard with a new belt drive alternator, lithium ion battery and 48V electric architecture to provide it with mild hybrid properties. At speeds between 34mph and 99mph, the car can coast with the combustion process idled for added fuel savings on extended periods of trailing throttle.

It also uses a stop/start function that shuts down the engine below 14mph as you roll up to traffic lights. In combination with a front camera, the engine is then restarted as soon as the car ahead begins to move or, alternatively, when the driver activates the throttle.

The successor to the earlier supercharged 3.0-litres V6 offered in the first-generation A7 produces 335bhp and 369lb ft of torque. Drive is channeled through a standard seven-speed S-tronic dual-clutch gearbox and the latest iteration of Audi’s quattro four-wheel-drive system that only activates the rear wheels when it detects added traction is required. 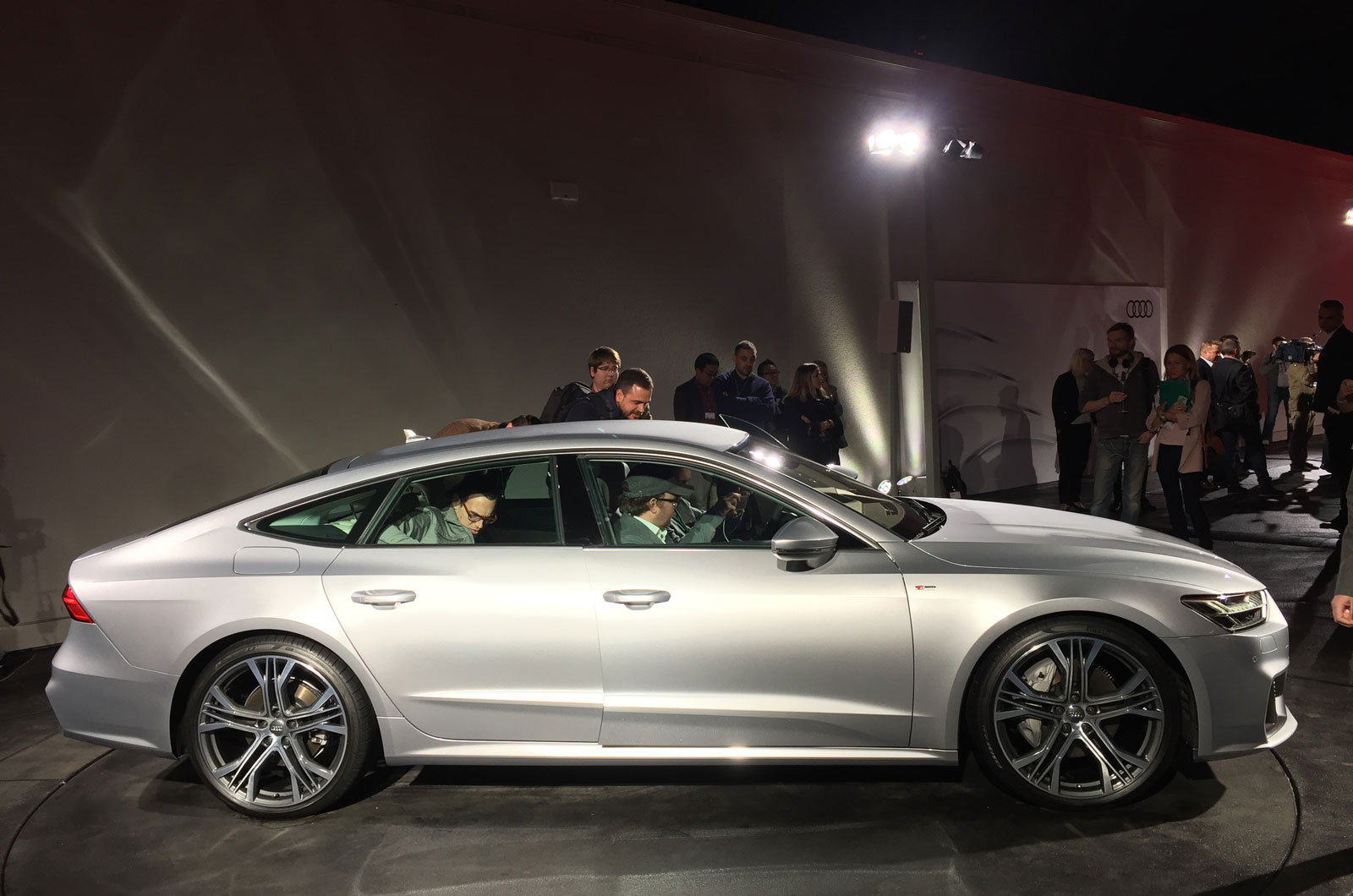 The new engine provides the initial A7 55 TFSI model with a claimed 0-62mph time of 5.3sec and electronically limited top speed of 155mph, with fuel consumption and emissions put at 41.5mpg and 154g/km respectively.

Audi is already talking up the dynamic qualities of the new A7, which follows the trend towards the adoption of four-wheel steering – or dynamic-all-wheel-steering, as Audi prefers to call it.

At speeds below 37mph, the rear wheels steer in the opposite direction to those at the front in a bid to imbue the new Audi with added low-speed manoeuvrability and a claimed 1.1m reduction in the turning circle compared with its predecessor. Above 37mph, the rear wheels steer in the same direction as those at the front, which Audi says contributes to increased straight-line stability and improves high-speed lane-change properties.

In other changes, Audi says the suspension has been developed from scratch and claims it offers greater levels of feedback. Buyers can choose between four set-ups: conventional steel springs, a sport suspension that lowers the ride height by 10mm, electronically controlled damping and a self-leveling air suspension.

Yes it’s a bit big, Barge like if you must, but the Show Car interior isn’t representative of what most of us would chose, the interior looks like it been made from old Soup tins too much Aluminium looking parts, the Dash is just awful and White Leather?!, who in there right mind wants White Leather?!

The font of knowledge.