BACK TO ALL NEWS
Currently reading: New Audi A3 saloon gets mild hybrid and coupe looks
UP NEXT
WEVC and Equipmake partner to electrify niche British firms

Echoing the latest A3 Sportback, the three-box A3 also receives an interior overhaul and is said to handle more precisely than its predecessor
Open gallery
Close
Share story

The new Audi A3 saloon adopts the same technologies as the recently revealed A3 Sportback, with mild-hybrid powertrains, refined suspension and a heavily revised interior.

Stylistically, the second-generation A3 saloon is only subtly updated over its predecessor but it is intended to have a more coupé-like appearance.

Although the saloon accounts for only a fifth of overall A3 sales in the UK, the bodystyle is popular in other markets, such as China, as proven by the recent flurry of new introductions in the segment, including the BMW 2 Series Gran Coupé and Mercedes-Benz A-Class saloon.

The booted A3 is longer, wider and taller than before, creating an extra 2cm of head room in the front and more elbow room, while boot space remains unchanged, at 425 litres. The car sits on the same updated MQB platform as the new Volkswagen Golf. The platform is claimed to be lighter yet also more rigid than the one it replaces.

It receives digital daytime running lights, made up of 15 LEDs, for the first time. Certain trim derivatives have an individual light signature to set them apart. 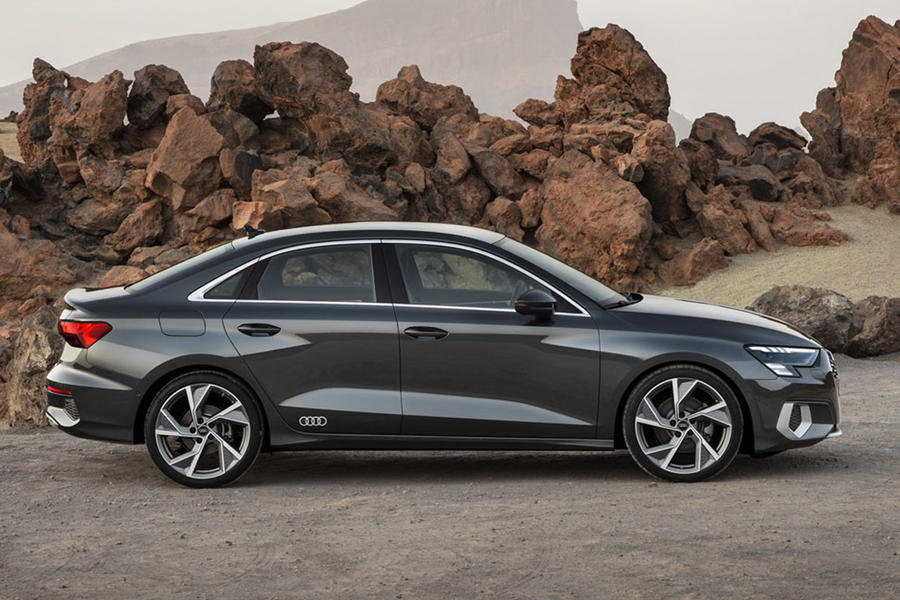 Aerodynamics are better than the outgoing model’s thanks to a higher rear end and large diffuser. The car achieves a Cd value of 0.25, 0.04 better than previously. A controllable cooling-air inlet with two electrically actuated louvre modules behind the grille regulates the flow of air according to the situation.

The standout engine is a 148bhp 1.5-litre TFSI petrol unit with 48V mild-hybrid technology, first announced in the A3 Sportback. Available only when paired with Audi’s S tronic seven-speed dual-clutch transmission, it can recover 16bhp during deceleration, supports the engine with up to 37lb ft of torque when driving off and can coast with its engine off for up to 40sec. It promises a 10% improvement in fuel consumption and CO2 emissions as low as 107g/km.

There are two other engine choices at launch: the same 35 TFSI with 148bhp but with a six-speed manual transmission and a 2.0-litre TDI diesel delivering 148bhp and paired with a seven-speed S tronic.

Later, a 114bhp 2.0-litre TDI diesel will arrive alongside a 108bhp 1.0-litre 30 TFSI three-cylinder petrol. The 30 TFSI engine will be available as a 48V mild hybrid in dual-clutch guise. Two plug-in hybrid variants will go on sale further down the line.

Audi claims the new saloon has been tuned to be sporty and “a touch more precise” than the first-generation saloon. This is largely attributed to a new, centralised dynamic handling system that ensures optimal interaction between all components. Alongside the standard set-up, there is a sport suspension option and a suspension with adaptive dampers, which promises a breadth between highly comfortable roll motion and agile handling. 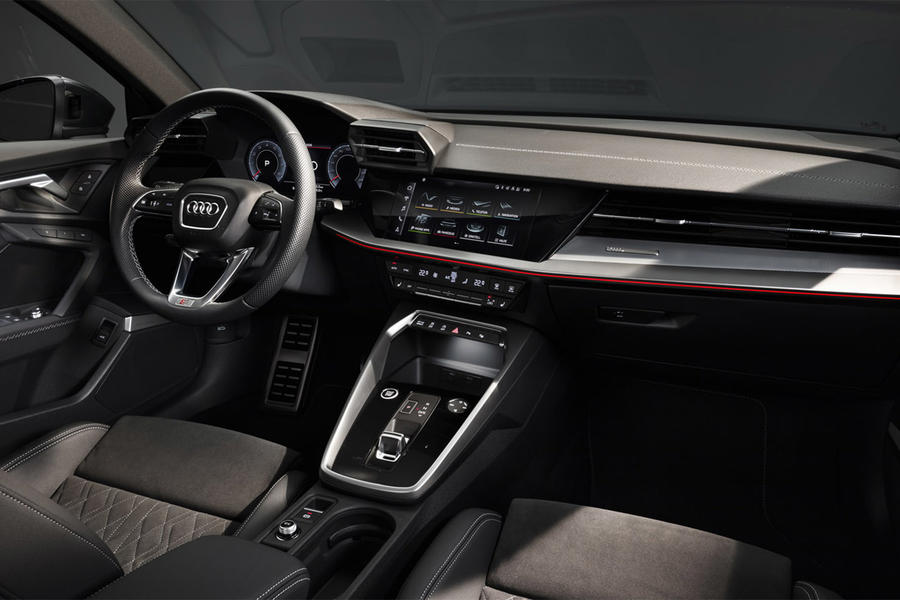 The most dramatic difference for Audi aficionados will be the A3 saloon’s interior. As first seen in the Sportback, Audi has decreased the number of physical controls and ditched its familiar rotary controller in the centre console. For those models with a dual-clutch ’box, there is a new shifter sitting in a black gloss surround. Also in the minimalist centre console is a round, sensory volume controller that reacts to circular finger movements.

There is a 10.25in digital instrument display and a 10.1in infotainment touchscreen is angled slightly towards the driver, while a new climate control unit below it replaces rotary dials with buttons.

The infotainment system, the third-generation MMI Navigation Plus, promises computer power 10 times better than that of its predecessor. Features include up to six user profiles, a wi-fi hotspot, online traffic information and improved natural voice control. For example, ask “Where’s the nearest Italian restaurant?” and the sat-nav system will show those nearby. As well as Apple CarPlay and Android Auto, Amazon’s Alexa voice assistant will become available soon after launch.

First deliveries are expected in July, but pricing is yet to be announced. In Germany, the new model starts from €27,700 (approximately £24,100) for the three-cylinder 30 TFSI.

Hide the rulers and set squares from VW designers

I always thought the a3 saloon (it's not a coupe) was one of the best looking Audi's  not hard these days but this new version is too jagged with fussy detail every where inside and out . Audi is following the Mercedes  approach to interiors over lit by led and glitzy shiny details every where.

To my eyes I think the styling is quite nice but I will have to reserve judgement until I see it in the flesh. I suspect with the added curves of the new model it will be quite susceptible to colour choice. I was looking at a TT coupe but one big drawback is the lack of sunroof and I have not been able to configure one to my ideal spec because most options seem to be wrapped up in packages. I was however more successful with the current A3 saloon and I noticed options were a lot less than on the TT. Obviously not as sporty but the tech more modern.

To my eyes I think the styling is quite nice but I will have to reserve judgement until I see it in the flesh. I suspect with the added curves of the new model it will be quite susceptible to colour choice. I was looking at a TT coupe but one big drawback is the lack of sunroof and I have not been able to configure one to my ideal spec because most options seem to be wrapped up in packages. I was however more successful with the current A3 saloon and I noticed options were a lot less than on the TT. Obviously not as sporty but the tech more modern.

The one big drawback on the TT coupe is that they regularly and frequently break their aluminium suspension arms, due to bimetallic corrosion seizing the joints, so causing the arms to be put in bending.  Obviously this could be a little  "unnerving" at low speed.  I imaging, though, if you hit a pothole on the motorway at speed, being unnerved would be the least of your problems though...  strange how there don't seem to be many old ones about.  And no-one has sued Volkswagen over it, so I guess they either accept it's normal, or most don't actually survive the experience.

A 1.0 litre 3 pot doesnt sound very premium. That engine belongs in the Up.