Production of the new Aston Martin DBX – the beleaguered firm’s first SUV, which will be vital to its long-term future – has begun at the new St Athan factory in Wales. Deliveries of the new model are due to begin later this month.

The DBX has been under development since 2015 and is set to become the most important model the British firm has produced. Aston Martin believes that the DBX will account for around half of the company's total sales in the coming years, broadening Aston’s customer base beyond its core sports car market.

The firm’s new St Athan plant, located on the site of an old Ministry of Defence base, was built specifically to house the new DBX production line. It took Aston four years to build the plant, which opened last December, and the first first series-production DBX - finished in Stirling Green, Aston's race team colour - rolled off the new line there today (Wednesday), with interrim chief operation officer Keith Stanton at the wheel.

Aston claims to have taken more than 2000 orders for the DBX so far, sustaining production into 2021. The plant's annual output will be around 4000 cars. 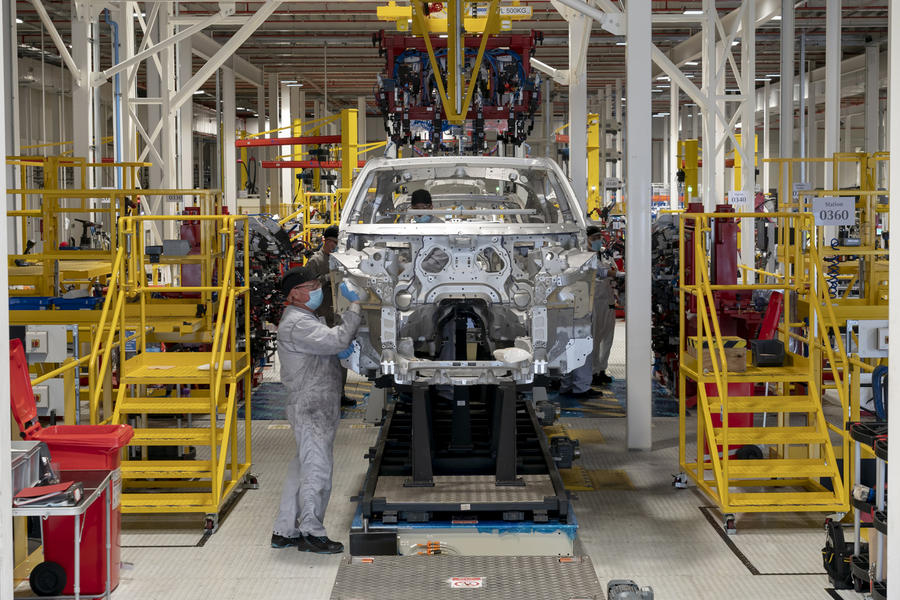 Stanton, who is in day-to-day charge of the firm until new boss Tobias Moers joins – said the start of production at the plant was “testament to the resilience and fortitude of everyone at Aston Martin.”

Marek Reichman, Aston Martin’s chief creative officer, called the DBX "a critically important landmark" and "the culmination of five years of hard work by everyone at Aston Martin”.

He added: “We are incredibly proud of our first SUV, which is as much of an Aston Martin as any one of our sports cars. From my design team to the engineers, the vehicle dynamics team and all the experts who handcraft this beautiful car here at St Athan, the DBX has become the car that will drive Aston Martin into a bold new era.

The DBX will be vital to reviving the fortunes of Aston Martin. The firm’s share price and value have fallen sharply since the company was floated on the London Stock Exchange and it has posted a series of heavy losses, exacerbated by the recent coronavirus pandemic. Billionaire Lawrence Stroll’s investment group recently invested heavily in the firm, leading to the Canadian becoming Aston’s new chairman.

Since Stroll completed his investment, the firm has revamped its long-term strategy, reducing production of its sports cars models, and former CEO Andy Palmer has left the firm. Palmer will be replaced by Mercedes-AMG boss Moers, who is due to start in 1 August.

Aston Martin to build new DBX SUV in Wales (from 2016)

Maybe that is to ensure that demand is always higher then supply and a rare sight on city streets! I'm sure that if they added another 2K to that annual amount, they would still not be able to keep up with demand. While I am in support for Aston building the SUV to keep their doors open and to continue building the beautiful coupes and convertible we and love, I just worry that the DBX's success may induce them to build a second, smaller one. This, IMHO, would be wrong for the marque and something the relaunched Lagonda brand should tackle. Lagonda should build whatever limited uber luxury sedans and SUVs, in whatever size and preportment that that market would except and support. In any event, I hope AM much success on the new addition to the family! With all this change, at least the "new/next" James Bond (shhh, that's secret agent 007) will have a proper vehicle to carry the family arround and do the school run in! Not having to step down to a common...Range Rover...to get the deed done, but in a vehicle that has been blessed by the Queen herself: an Aston Martin.

Same with clown carlos ghosn ceo of Nissan debuting premium brand INFINITI in 2009 in Europe as we was entering a huge economic downturn, right cars but at the wrong time and wrong price so customers forget the cars exist. Anyone remember the Q30 or Q50? Astons only hope is to be brought out by Daimler. It would be a logical decision, German rivals VW and BMW have their own British luxury car builders and German management plus parts sharing will be the only way for aston to survive in the 20s and beyond because this suv is NOT going to be the saviour in this china wuhan virus economy. £165k is insane money, DBX is not special enough for the price and will flop because- It is not anywhere near the luxury of a Bentley , not as sporty as the Cayenne Turbo, not as unique as the G63 amg or imposing as the x7 which is a must to sell well in the profitable ccp chinese market who like huge tank-like suvs to show off their corrupt blood monied wealth

Fear for Their Future

If we are to believe Autocar's hyperbole, the entire future of Aston Martin rests on tens of thousands of people going out and buying this year after year.  Not sure that's a good business model, hope I am wrong.

Fear for Their Future

If we are to believe Autocar's hyperbole, the entire future of Aston Martin rests on tens of thousands of people going out and buying this year after year.  Not sure that's a good business model, hope I am wrong.