BACK TO ALL NEWS
Currently reading: New 2023 Ford E-Transit Custom EV brings 236-mile range
UP NEXT
New 2023 Audi A4 Avant undergoes tests in the Alps

The new mid-sized Ford E-Transit Custom is the electric successor to the UK's best-selling vehicle, bringing a bold new look and a range of up to 236 miles.

Revealed today ahead of production getting under way at the Ford Otosan plant in Turkey in the second half of 2023, the new E-Transit Custom is the second of five all-electric commercial vehicles Ford will launch in Europe by 2024, following hot on the heels of the full-sized Ford E-Transit.

The E-Transit Custom is also the first new model revealed since Ford hived off its commercial vehicle operations into the dedicated Ford Pro division.

It will be built alongside an electric version of the next-generation Volkswagen Transporter, as part of an agreement between the two firms that sees Volkswagen commercial vehicles use Ford underpinnings and gives Ford access to VW's MEB platform for passenger EVs.

Unlike its larger E-Transit sibling, the new arrival takes a distinctly different design approach to the existing, combustion-powered Ford Transit Custom, which last year outsold the UK's best-selling car, the Vauxhall Corsa, by a comfortable margin of around 25%. 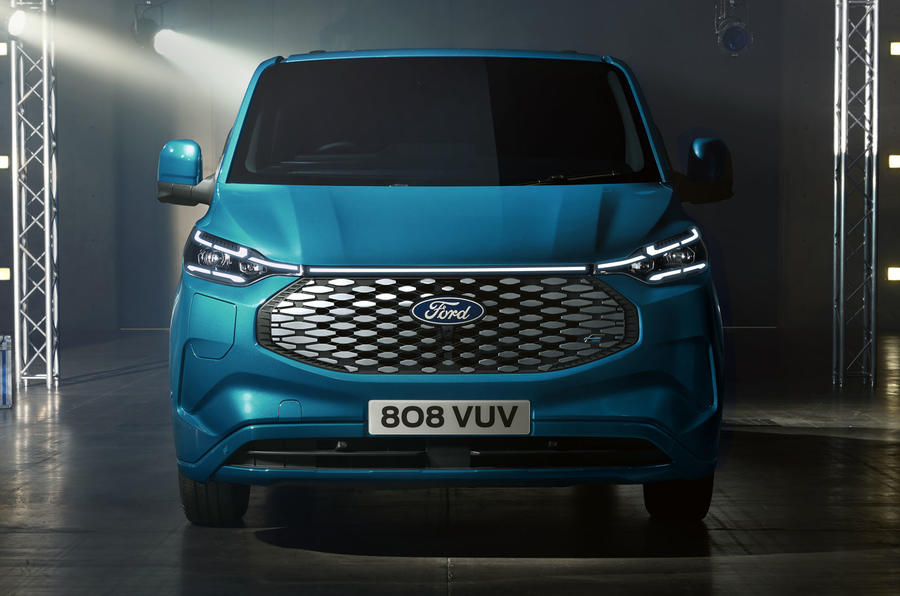 Ford highlights the "rebalanced proportions" of the EV, which give "a confident stance" that will "set a distinctive new design benchmark in the one-tonne segment".

The overall treatment is familiar, but a completely new front-end look brings the E-Transit Custom into line with the latest Ford Fiesta, Ford Focus and Ford Tourneo Connect. A prominent hexagonal 'grille' panel is flanked by slim, angular LED lights and topped by a wraparound daytime-running light, while the charging point has been integrated on the front right-hand side.

Ford has yet to reveal the interior or give full technical specifications but says the battery will be capable of DC fast-charging and the powertrain will allow for "full towing capability". It says the van has been designed to "help businesses across the region to effortlessly make the change to electrified vehicles".

It is not yet confirmed if the Custom will be offered with the same 68kWh battery as the E-Transit – which can charge at speeds of up to 115kW – but it is likely to be sold with the same choice of 181bhp or 265bhp motors - both sited on the rear axle and both producing 318lb ft.

That should get the E-Transit Custom from 0-62mph in less than 7.0sec and to a top speed of around 85mph, while enabling similar payload capacity to the combustion van.

It will match the E-Transit inside, too, with a large 12.0in touchscreen running Ford's latest Sync 4 infotainment system, a choice of three driving modes and variable regenerative braking. It will also feature a 2.3kW vehicle-to-load power supply to enable on-site operation of tools or other external appliances.

Ford will release further details of the new E-Transit Custom in September, but taking the price gap between the combustion and electric Transit models as a guide, expect it to cost from around £40,000.

After launching the E-Transit Custom, Ford will shift focus to introducing an EV successor to the smaller Transit Courier, Tourneo Custom and Tourneo Courier models.

So the VW Ford love in means Ford do the commercials and VW do the cars.... why is the new Transit Connect based on a caddy van??

VW are scoring an own goal getting into bed with Ford for their Transporter T7.

Tradesmen pay a premium for a van that doesn't look like a rusty shipwreck after 4 years, and doesnt feature 'unique' engineering solutions such as the cambelt-in-oil Ford engines. I'll go for a Vito for the next van (assuming it isnt some re-hashed Renault derivative).

I think this will do well - businesses don't tend to read the daily fail and will just look at what's cheapest, which this will be.  Just need to get some charging on site.

Downside will be even more pressure on m-way chargers for longer journeys.