The next-generation Nissan X-Trail will be offered with the firm's innovative new ePower powertrain technology when it arrives in Europe in summer 2022.

Shown in full for the first time at Shanghai, the brand's largest SUV once again shares the bulk of its exterior and interior design with the US-market Rogue, which it has followed onto a heavily updated version of the Renault-Nissan-Mitsubishi Alliance's CMF-C crossover platform - as used by the Nissan Qashqai.

The ePower system differs from a conventional hybrid powertrain in that a petrol engine features but is used exclusively to charge a battery, which in turn powers an electric motor connected to the front axle. 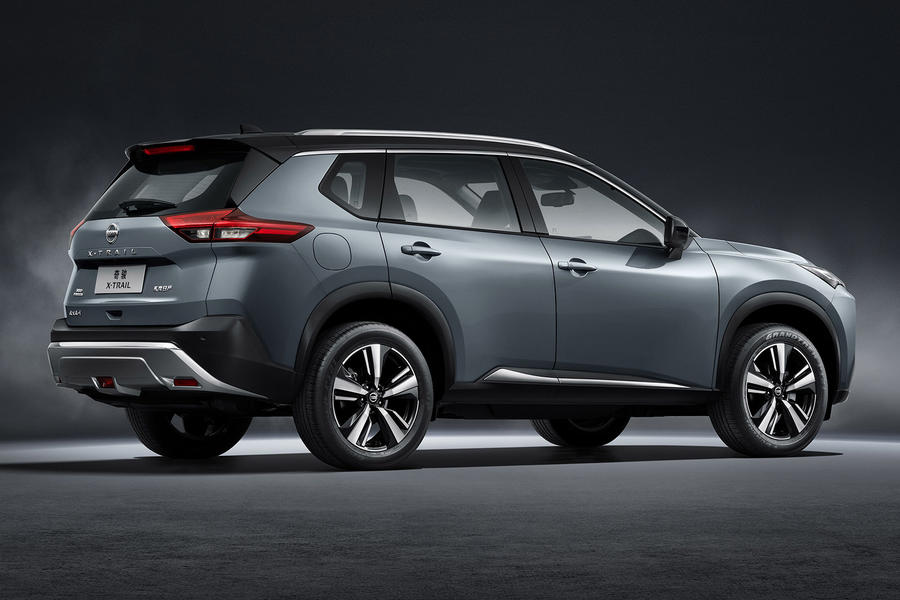 In the Qashqai, the set-up comprises a 1.5-litre petrol engine mated to a front-mounted electric motor for a total output of 188bhp and offers the same 'e-Pedal' one-pedal operational ability as the all-electric Nissan Leaf. An identical system will likely feature in the X-Trail, offering enhanced efficiency and lower emissions than the range of pure-petrol and diesel engines used by the current car.

The fourth-generation car will remain available optionally with seven seats, but is said to "remain sufficiently compact for easy parking manoeuvres".

For the Qashqai, the slightly larger latest generation of the CMF-C architecture brings new front suspension and a more responsive steering set-up to enhance dynamic behaviour, and it is likely the X-Trail will largely follow suit. Nissan has confirmed a four-wheel-drive variant will be offered, equipped with different settings for driving on snow, mud and gravel.

Dimensions and technical details have yet to be revealed, but the new Rogue is 38mm shorter and 5mm lower than its predecessor, so expect similar changes for the X-Trail, alongside a raft of aero-focused new design cues.

There is no official word on pricing, but expect a premium over the outgoing version's circa-£23,000 entry price.

Nissan will build batteries in UK to sustain Sunderland plant

Log in or register to post comments
FastRenaultFan 24 October 2021
Looks good. I like it. I think it needs some light colours like some beige in the dash do otherwise it would be a very dark and dull place to spend time. I would have it with beige seats and dash if I were to get one.
DAN24 21 April 2021

I have blacklisted Nissan and will not buy their car for the following reasons:

I bought a brand new Nissan in 2020 and was very excited about it during the first week, but I soon came to realize that the whole product was just a scam.

- Wheels' geometry was not properly done by the manufacturer. Upon contacting client service, they failed to provide any solution and refused to pay for the adjustments of the angles. I had to pay this myself, even if the car is under warranty

- The car produced unbearable noised from trunk and back seats. After taking it to an authorized Nissan services, it was observed that the relevant parts in the back were worn out and thus producing the annoying sounds. I had to wait about 4 weeks until Nissan paid (although under warranty, they initially refused the payment, as the service informed)

- The dealer sold me the car bragging about the formidable NissanConnect and how I could connect my phone to turn lights on, see the status of the car, lock the doors from my mobile, etc. I discovered during the following weeks that the whole was just a scam - after taking my money, the account and application were deactivated, Nissan claiming that it was no longer available for my version. When they took the money it was very well available, after they got the money, it was no longer available for my version, despite their marketing

- The car produced (and still produces) unbearable noise from the wind, as if being on Titanic or some kind of a ship in the middle of the sea. This was discovered after a few weeks, when I started driving on the highway, as soon as hitting the 50 mph. I took the car again back to the authorized service and they discovered that the rubber seals on the doors were also worn out and not responding to quality standards, this explaining the strong wind coming into the cockpit everytime when exceeding 50 mph. In the already established trend, Nissan refused to pay for replacement and fixing of the default, although the car is under warranty, less than 8 months old.

- Again noises and unbearable sounds, I had to take the car back to the service one more time. They discovered that NISSAN sold a NEW CAR with silicone (mastic) around the rearview mirrors and between the mirrors and the car body. Again, NISSAN refused to fix the default, claiming it was all right like that, with mastic on a new car.

- The brakes started producing squealing noises even when applying soft brakes and after only driving  around 7,400 miles (3 months). Strange enough, this only happens with the brake on the right side, and not the left, this proving that the noises and lack of conformity is not due to the "driving style" as the dealer alleges, but again to the worn out parts that NISSAN used on supposedly new cars. Again, NISSAN refuses to pay, even if the car is under warranty.

The single way to deal with NISSAN is indeed to have them sued, as they have also refused reimbursement and to take back their magnific "new" car with fallen parts, for which they break the warranty contract.

Agree, far from Nissan largest SUV. Nissan Patrol is massive. When did Autocar become so UK centric and insular.