BACK TO ALL NEWS
Currently reading: New US-market Nissan Rogue revealed, previewing 2021 X-Trail
UP NEXT
Two worlds collide: Porsche Taycan vs Alpina B3

Nissan has revealed the third generation of its US-market Rogue SUV, which is expected go on sale in the UK next year with subtle alterations as the new X-Trail.

The Rogue, Nissan’s best-selling SUV, has been re-engineered with a focus on “functionality, flexibility, technology and safety aimed at simply making life easier” and is targeted primarily at young families.

The rear end design is more evolutionary, but a reshaped spoiler, new tailgate and double-bubble roof design set the new car apart from its predecessor.

The Mk3 Rogue is 38mm shorter and sits 5mm lower than its predecessor, with Nissan saying this improves “driving manoeuvrability”. New design features including an active grille shutter, reshaped A-pillars, tyre deflectors and underbody covers have been introduced to bolster the SUV’s aerodynamic efficiency.

The Rogue has moved across to an all-new platform which is said to bring enhanced dynamics alongside a raft of new chassis control technology. The newly introduced Vehicle Motion Control system, for example, monitors braking, steering and accelerator inputs, intervening when necessary in difficult driving situations. 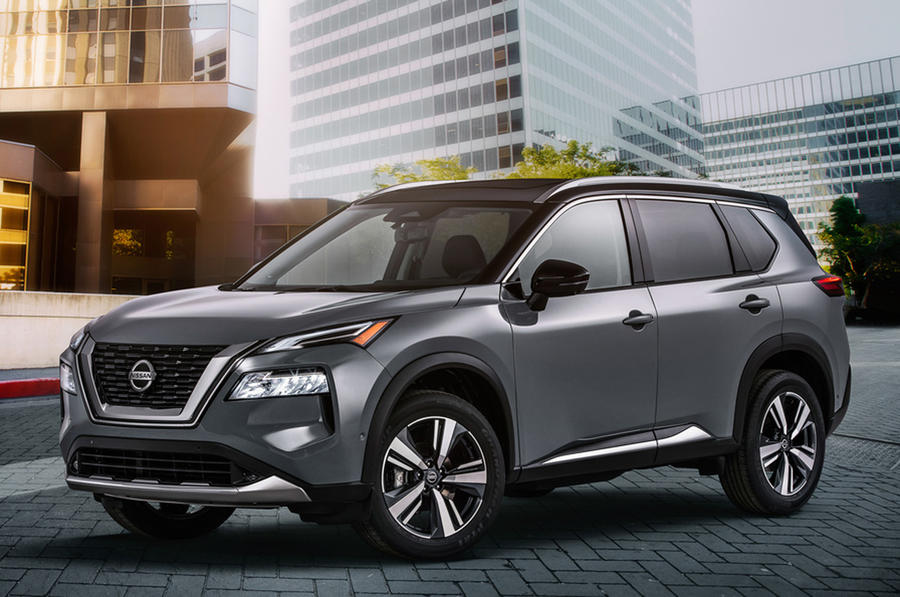 Just one engine is available in the US from launch: a 2.5-litre four-cylinder petrol with power bumped up from 168bhp to 179bhp and torque from 175lb ft to 181lb ft. The Europe-bound X-Trail is unlikely to offer this powertrain; it will more likely use evolved versions of the smaller-capacity petrol and diesel units offered in the current car, while ushering in a new hybrid variant.

Inside is where the Rogue has been most visibly re-engineered, with a so-called Family Hub interior layout that brings enhanced comfort and usability.

Both rear passenger doors open to 90deg to improve ingress and egress for child seats, which can be installed on either end or the middle of the rear bench, while Nissan has made its Intelligent Key software compatible with the rear doors as well as the front.

Additional interior upgrades include a new ‘butterfly’-style centre console which makes it easier to pass objects from the front seats to the rear, Nasa-inspired lumbar support seats and an optional Intelligent Climate Control function which can be used to set the cabin temperature before entering the car.

The Rogue will be sold in the same S, SV and SL trim levels as before but gains a new Platinum range-topper for 2021, equipped as standard with quilted leather seats, a head-up display, ambient lighting, wireless smartphone charging and a Bose sound system. Optional extras across the Rogue range include leather upholstery; heated seats, mirrors and steering wheel; a 360deg camera; remote-folding rear seats and Nissan’s Door-to-Door navigation system.

A date for the Mk3 X-Trail’s unveiling is yet to be confirmed, but it will likely take place before the end of 2020.

The Toyota RAV4 rival had been set to enter production at Nissan’s Sunderland factory in the UK, but the Japanese firm announced last year that, due mainly to uncertainty surrounding the UK's departure from the EU, it will instead be built in Kyushu, Japan.

Purposeful, good looking mid-sized SUV. Ready for the schoolrun. mountain pass, Mohave desert and Union Square. The ungainly, inelegant awkwardly  shaped Toyota RAV pales in comparison, Love the Rogue interior - it combines a classic look with tons of tech. The Juke and Rogue bode well for the renewal of Nissan's entire line-up the next 18 months.

Purposeful, good looking mid-sized SUV. Ready for the schoolrun. mountain pass, Mohave desert and Union Square. The ungainly, inelegant awkwardly  shaped Toyota RAV pales in comparison, Love the Rogue interior - it combines a classic look with tons of tech. The Juke and Rogue bode well for the renewal of Nissan's entire line-up the next 18 months.

Bit of a munter

erm.. not built at Sunderland because of brexit uncertainty..