BACK TO ALL NEWS
Currently reading: New 2021 Seat Ateca facelift to be unveiled this month
UP NEXT
Ford backs call for European ban on new ICE cars from 2035

New 2021 Seat Ateca facelift to be unveiled this month

An updated version of the Seat Ateca will make its debut later this month, Seat has confirmed, and it has revealed the first official image of the new family SUV.

The Nissan Qashqai rival is due to be unveiled on 15 June, the Spanish maker has confirmed. The new preview picture reveals only the rear end of the car, where we can see the shape is fundamentally the same. However, detail changes are visible, including lightly altered tail-lights and the new, more expressive model badging we first saw on the new Seat Leon.

UPDATE: the 2020 Seat Ateca has now been revealed - full story

Limited details for what Seat describes as a "significant refresh" have been released alongside the image. The SUV is said to feature a "new aesthetic both inside the cabin and the exterior design", while safety and connectivity features will increase. 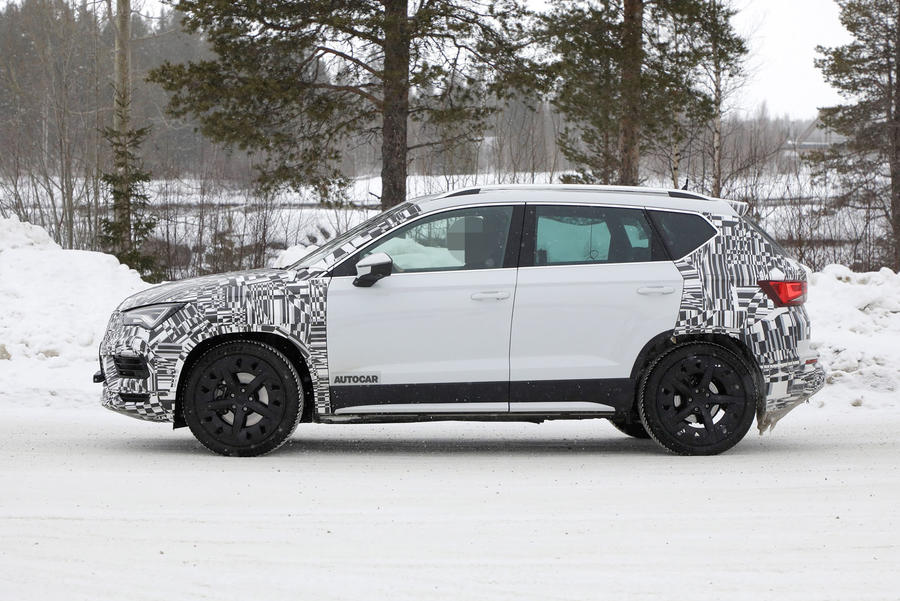 The engine range will be enhanced with claims of improved efficiency, although it's not clear how extensive this will be. A reference point is the similarly priced Leon, which benefits from mild-hybrid versions of Seat's three- and four-cylinder petrol engines with automatic gearboxes.

Earlier prototypes appeared to sport some type of measurement sensors on each wheel - the kind we’ve seen before on prototypes fitted with regenerative braking. Such technology is generally the preserve of a hybrid powertrain, which would fit into the Seat electrification roll-out.

Although not yet confirmed, it's possible an 'eHybrid' plug-in hybrid version would follow on from the Leon. In the hatchback, a 1.4-litre turbocharged petrol motor, 13kWh battery pack and electric motor combine to produce 201bhp and offer an electric-only range of 38 miles.

The most intersting thing about this update is the appearance of three Lynk & Co SUVs in the pics, one with a nice red roof :)

is the photo of the white SEAT being followed by the black Audi shows how similar the designs are, the bonnet could probably be swapped without even trying..

SEAT is giving its SUV the same updates as the rest of the VAG group have got or are going to get, with a few new bits of trim for good measure. Very similar to the treatment Golf 7 got to become the "all new" Golf 8.