The upcoming Mercedes-AMG C53 4Matic has been spied undergoing cold-weather testing for the first time, less than a year before it's planned to head into UK showrooms alongside standard versions of the new, fifth-generation C-Class.

Set to directly rival the Audi S4 and  BMW M340i xDrive, the four-wheel-drive C53 will replace the existing C43 4Matic. It forms part of an extensive new C-Class line-up from AMG alongside successor models to today’s C63 and C63 S – each to be offered in saloon, estate, coupé and cabriolet body styles.

Despite its extensive disguise, the C53 prototype pictured here is clearly differentiated from standard versions of the new C-Class we’ve already caught testing by a series of typical AMG styling elements, including a 'Panamericana' grille with vertical louvres, a deeper front bumper assembly with new vertical ducting and so-called flics within the outer edges, wider sills and a bespoke rear bumper housing four round tailpipes.

It also sports large brake discs and what appear to be six-pot front brake calipers – a telltale sign that this is no ordinary C-Class. Further differentiation from previous fifth-generation C-Class prototypes include 18in wheels, those up front featuring an open-spoke design and those at the back with solid spokes. 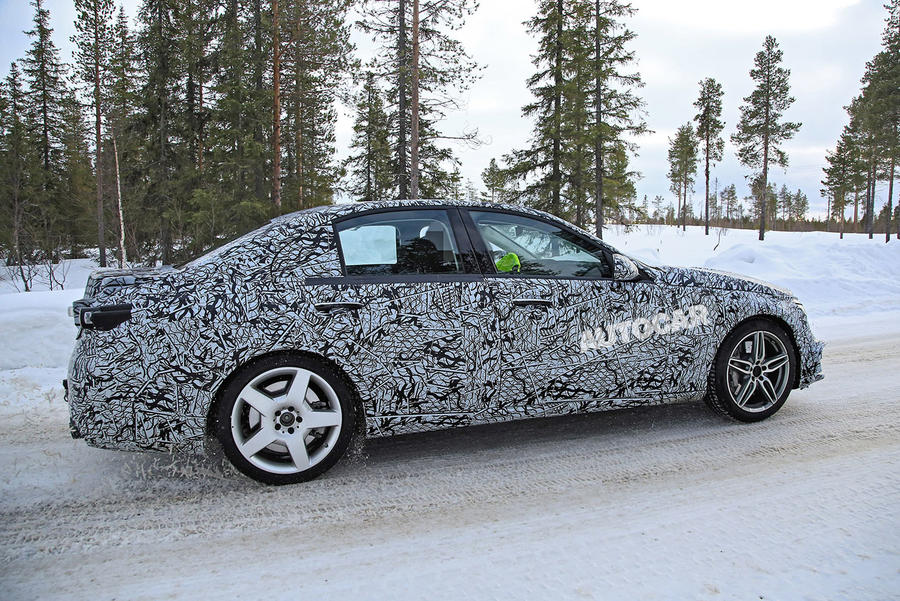 As first reported by Autocar last year, AMG has settled on a four-cylinder strategy for its new C-Class models.

Nothing is official just yet, although indications are it will be tuned to develop in the vicinity of 380bhp, giving the new C53 and subtle 13bhp increase in power over the outgoing C43.

Along with the new engine, the new AMG model is set to adopt a nine-speed automatic gearbox and heavily updated four-wheel drive system offering a greater apportioning of drive front to rear.

Meanwhile, Autocar has learned AMG is also developing an advanced new turbocharger setup in partnership with its Brixworth-based High Performance Powertrain division for use on future production models, including the new four-cylinder engine due to see service in the next C63 during the second half of 2021.

Similar to the system already used by Mercedes on its F1 race car and set to appear on the Project One hypercar, the new layout is understood to add an electric motor and compressor to the induction system to boost output, eliminate turbo lag and provide what AMG insiders describe as “energy to be harvested back into the system for added performance”.

A 4 cylinder is second or third class to a v8 , 6 or even 5 cylinder why would you spend a lot on a four.

With a 4 cylinder, it is

12 March 2020
With a 4 cylinder, it is basically a commercial vehicle

12 March 2020
Some common sense. It would have had serious issues selling with the new emissions rules coming in this year.
Just like dinosaurs, big ICE engines were great but are being replaced by something better.

All the reports on the 4 cylinder replacement ie Porche thay use more fuel than 6 cylinders and also smaller  very high compression petrols emit more particulates,just like diesels.I suppose when solid state technology is here in 5 to 8 years it will be all electric .

Unless 'something better' means something more desirable, then it isn't better.

You say it is common sense to but a little 4 cylinder in an AMG, but when was an AMG ever remotely about common sense?  The whole idea of AMG is hammer car madness and brutality.

This may be some sort of Mercedes, but it sure as hell isn't any sort of AMG.

I've got an old 6.2 CLS which I've had for nearly 13 years and 152000 miles.  I will keep it until it expires as I have absolutely no interest in anything they have to offer as a replacement now.

12 March 2020
Well, VW is not the best example when it comes to emissions, is it?
The 4 cylinder will also weight less, which is another benefit.

Porsche 6s and others

Well, VW is not the best example when it comes to emissions, is it? The 4 cylinder will also weight less, which is another benefit.

Not if you have to add a turbo, intercooler, hybrid battery, wiring, electric motor to that 4 pot to make up the diffference.  Wonder what the difference in % weight increase is between a Cayman 4 and the Cayman 6 pot, anyone?

Well, VW is not the best example when it comes to emissions, is it? The 4 cylinder will also weight less, which is another benefit.

Not if you have to add a turbo, intercooler, hybrid battery, wiring, electric motor to that 4 pot to make up the diffference.  Wonder what the difference in % weight increase is between a Cayman 4 and the Cayman 6 pot, anyone?

The existing C43 is biturbo.

The existing C43 is biturbo. Nice try, though.

That's OK I was referring to the Porsche example, read from Ski Kid onwards. Better luck next time!