Family SUV will cost from £23,995; it's available to order now, with first deliveries due early next year
Share
Open gallery
Close
Share story

Ford has released UK-specific pricing and trim level details for the new, third-generation Kuga SUV. It's priced from £23,995, with priority deliveries of the high-spec First Edition models early next year. 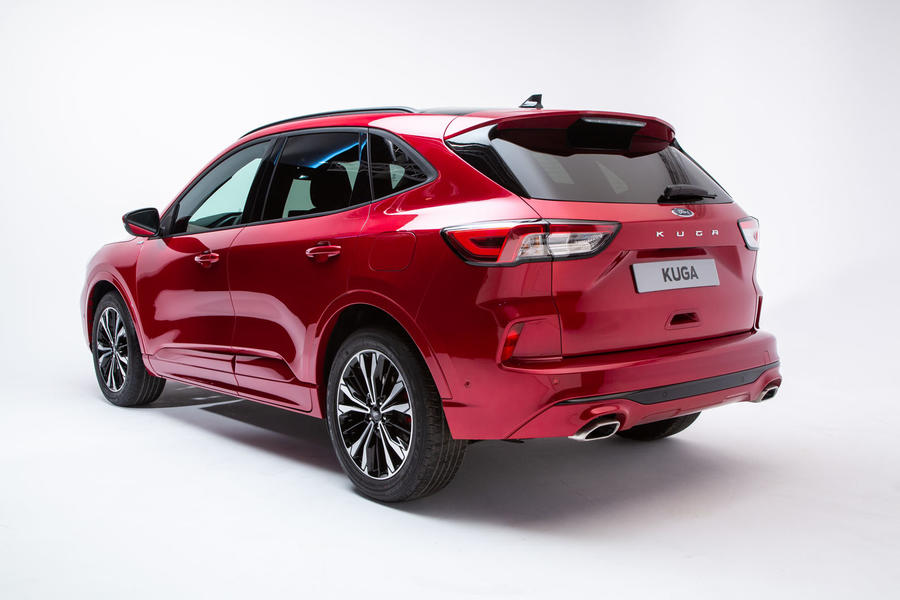 Further engine options include a 148bhp 1.5-litre turbo petrol and 1.5-litre and 2.0-litre diesels, the latter of which is also available in 187bhp form or 148bhp form with mild hybrid tech.

A new plug-in hybrid option is also available from £33,095 in Titanium trim - the same price as the higher-powered 2.0-litre diesel.

The Kuga has been redesigned from the ground up in a bid to attract more buyers in the still-booming family SUV sector, and the new model will be offered with petrol, diesel, mild hybrid, hybrid and plug-in hybrid powertrains.

As Ford ramps up its European business restructuring, SUVs will play a crucial role. "One in three sales across Europe are SUVs, and for us it's one in five. We want to change that," Jorg Beyer, managing director of product development, told Autocar.

The hybrid line-up in particular is expected to be key to attracting new customers.  Ford has beaten many of its rivals to market with its plug-in hybrid option, which mates a 2.5-litre Atkinson cycle petrol engine with an electric motor and 10.3kWh battery to deliver 222bhp. The model can travel up to 34 miles on electricity alone, giving it an official economy figure of 201mpg on the WLTP cycle in PHEV operating mode (or 43.5mpg WLTP with no charge in the battery). Official CO2 emissions are just 29g/km.

Buyers will also able to choose a regular hybrid set-up, akin to that of the Toyota Prius, linking the 2.5-litre petrol engine to an electric motor and smaller battery to deliver 50.4mpg and 130g/km. A 48-volt mild hybrid setup is mated to a 148bhp 2.0-litre diesel engine to offer 56.5mpg and 132g/km. Conventional 1.5-litre petrol and 2.0-litre diesel variants are also available, mated to either a six-speed manual or eight-speed automatic gearbox. Front and four-wheel drive are both available.

Also striking is the new, more sophisticated and less boxy look of the third-generation Nissan Qashqai, Kia Sportage and Hyundai Tucson rival. The styling moves Ford’s design language another step on from the more contoured lines of the latest Fiesta and Focus. The interior also follows those cars, delivering an uncluttered, sweeping look despite the raft of technological functions that are offered, the majority of which are controlled through the central touchscreen. 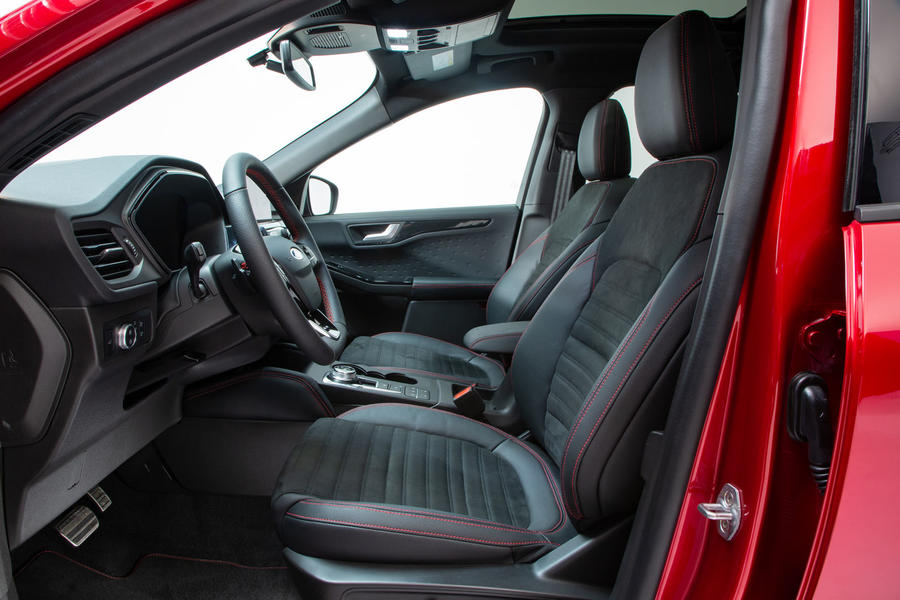 The Kuga sits on the same C2 platform as the new Focus, being longer, wider and having a larger wheelbase – and therefore improved stability and dynamics – than the car it replaces. The platform is also said to be 10% torsionally stiffer than the outgoing car’s, as well as supporting the basis for a more aerodynamic design and allowing weight savings of up to 90kg over today’s model.

In particular, the new Kuga is said to deliver more interior room than before, including what Ford says is class-leading space for rear-seat passengers thnks to an 89mm length increase. In the front, occupants get 43mm more shoulder room and 57mm more hip room than in the current model, while in the rear there is a 20mm increase in shoulder room and 36mm more hip room, while the seats, split 70:30, slide fore and aft as standard.

This increased rear accommodation has been achieved in part by setting the dashboard closer to the engine bay bulkhead and positioned more upright than before, allowing front seat passengers to be seated farther forward.

Despite sporting a dramatic, sloping roofline and an overall height that is lower by 20mm than that of the outgoing car, the new Kuga also offers 13mm more head room in the front and 35mm in the rear, thanks to clever interior packaging. 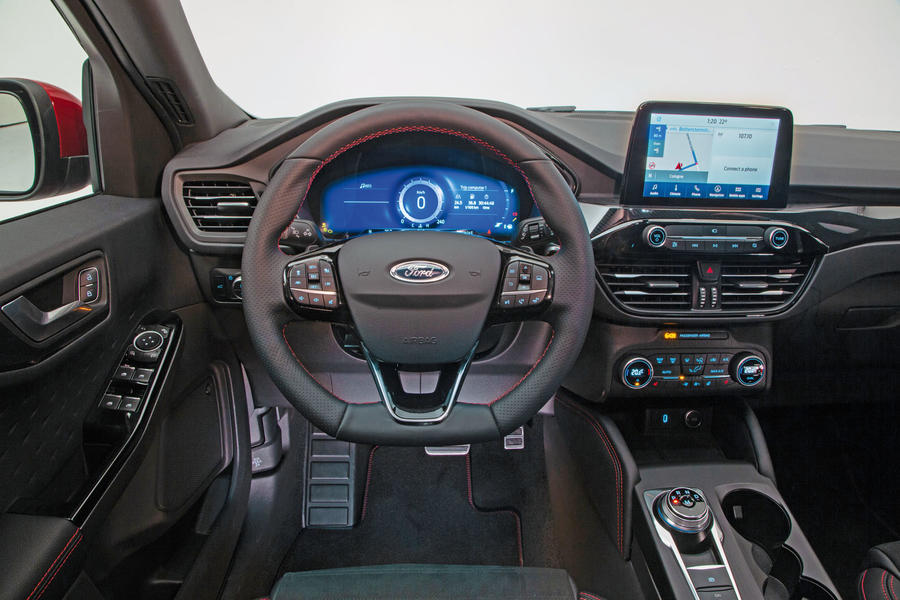 New technology for the Kuga includes Ford Pass Connect, which can provide wi-fi connectivity for up to 10 devices, a head-up display, wireless charging for a phone, a system that automatically brakes the car if it drives forwards or backwards into crossing traffic and a self-parking system that can parallel park or drive into a space perpendicular to the car at the push of a button. A hands-free boot-opening system, which is operated by waving your foot under the rear bumper, is also available.

A radar and camera-guided system that detects slower-moving and stationary vehicles, and which will automatically steer around them to avoid a collision if necessary, is also available, as are lane-keeping assistance, wide-angle cameras to aid front and rear visibility and Wrong Way Alert, which combines camera-based sensors and satnav technology to warn if the car is being driven the wrong way down a road. 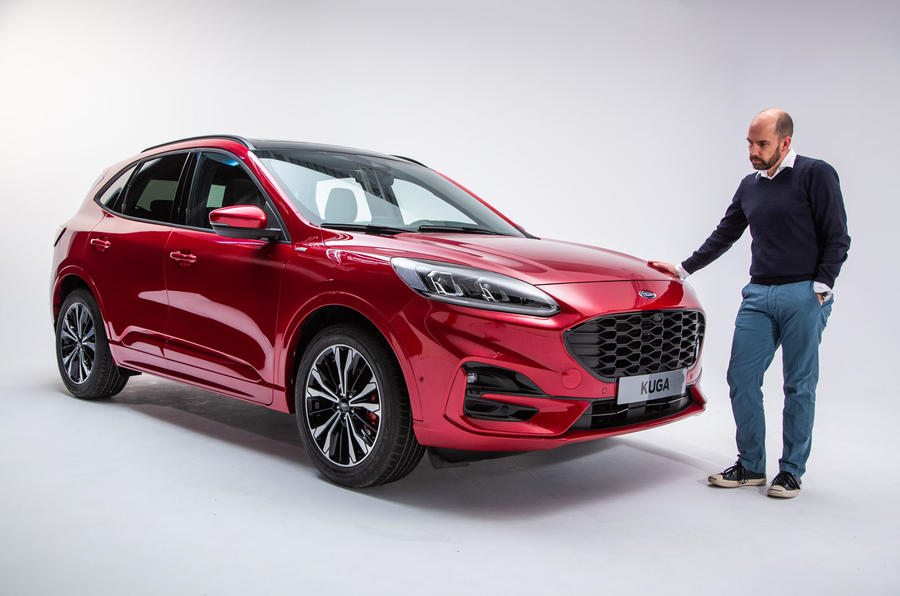 Where do you start with a total redesign such as this?

“It started three years ago, led by the US design studio. We came in 18 months later, with a focus on the ST-Line and Vignale models. There are challenges to designing a global car; different markets often want different things. We ask potential customers what they want early on. There were clear themes: they wanted a larger, more practical car that allowed them to stand out. If they just wanted space they’d buy a van.”

The exterior design is quite a departure from what’s gone before.

“It is more flowing and more sensual, we believe. It’s not noisy or polarising; there’s a sophistication to it that we started using on the Fiesta and then Focus, and which we have dialled up again here. Although it’s tagged an SUV, there’s a growing sense that people buying these cars are not after a utility vehicle – they want something that looks desirable.”

The interior is also markedly less cluttered than in previous-generation Fords.

“There’s a science to it – you can measure where people’s eyes go when they climb in a car and then ascertain if they are drawn to something because it is a distraction or because they like it. “In this case the designer’s adage that less is more holds true. We’ve not just put everything in the touchscreen, either: we recognise that buttons can do some jobs much more intuitively.”

You’ve styled an ST-Line car – is a full ST model a possibility in future?

“It could conceivably be done, but there are no plans. Performance SUVs aren’t uncommon now, so if I was asked to do it then there’s a very clear direction from other ST models that we could follow.”

"and 35mm in the rear, thanks to clever interior packaging. " that and an increase in length of 89mm. New model bigs bigger still

Bits of this, bits of that

The front looks a bit like Kia (who copied a Cayenne) & the C-pillar & rear looks BMW X1-ish. The dash looks like a cheap version of a BMW dash. At least they've not deserted basic ergonomic principles by ditching actual buttons & knobs, so you drive & adjust settings without having to take your eyes off the road.
FEDUP 3 April 2019

I am always surprised how people can be so critical of a new model by only viewing a few pictures and review on-line - Surely it would be a better bet to see the car when it arrives in the showrooms to see it in the metal? Then you can make a more considered thought about it