BACK TO ALL NEWS
Currently reading: Mini Superleggera to take on Mazda MX-5 in 2019
UP NEXT
UK car finance tightened to become 'fairer' for customers

Mini Superleggera to take on Mazda MX-5 in 2019

Mini is pursuing plans for a new flagship roadster after what company insiders describe as an overwhelming response to its Superleggera concept, first revealed at the 2014 Concorso d’Eleganza Villa d’Este in Italy.

The new two-seater is intended as a direct rival to the new Mazda MX-5. It is likely to form part of a future five-pillar Mini line-up, as an offshoot of the Cabriolet model, and has been conceived to use a range of powerplants. These include a new petrol-electric plug-in hybrid system that provides the basis for a 216bhp four-wheel-drive variant.

Speaking about plans to progress the Superleggera towards production, Mini boss Peter Schwarzenbauer said: “The interest was tremendous when we showed this concept car. We are now working hard to get it on the street. It’s an economically challenging project and there is no firm decision, but we have a lot of people here that are fighting for it. I think it would be extremely good for the brand.”

The basis for the new Mini roadster is the short-wheelbase UKL platform of parent company BMW. This platform is also used by the current Mini hatchback. The versatile structure is described as being highly suitable for an open-top car because of its rigidity and low weight.

Unlike the rear-wheel-drive MX-5, the Superleggera is planned to be offered natively with front-wheel drive. The option of four-wheel drive is likely to be available for more powerful versions.

Power is expected to come from a range of three-cylinder and four-cylinder petrol and diesel powerplants, all of which are used in other Minis. Ranging from 1.5 to 2.0 litres, they are likely to offer between 134bhp in an entry-level Cooper model and 227bhp in a John Cooper Works variant.

The plan to provide the new roadster with a hybrid option has led one Mini official to describe the new roadster as a junior BMW i8. The official said: “The system is quite similar, although it has been turned 180deg to site the combustion engine at the front and the electric motor at the rear. It also provides the scope for on-demand four-wheel drive and electric drive up to 50mph.”

This new hybrid system will appear first on BMW’s 2 Series Active Tourer. It uses a front-mounted turbocharged 1.5-litre petrol engine developing 134bhp and 162lb ft and a rear-mounted electric motor with 87bhp and 122lb ft. All up, it has a total system output of 216bhp and 209lb ft of torque.

In the 2 Series Active Tourer, drive is channelled from the combustion engine to the front wheels through a six-speed automatic gearbox. The electric motor transfers its power to the rear wheels via a twin-speed gearbox also mounted at the rear in a layout that provides a distinct rearward weight bias.

Energy for the electric motor is provided by a relatively small 7.7kWh lithium ion battery that is also sited at the rear.

The first Mini to feature the new hybrid system will be the second-generation Countryman, due in the second half of 2017. It is expected to be followed by the Superleggera roadster in 2019.

Stylistically, the new Mini roadster is expected to lean heavily on the Superleggera concept car. Both longer and wider than the existing version, it has classic roadster proportions with a long-by-Mini-standards nose, a two-seat cabin set well back within the wheelbase and a minimal rear overhang.

Overall, the body is more heavily structured than that of existing Mini models. Prominent elements include a defined shoulder, distinct swage line and an abruptly curtailed rear end. 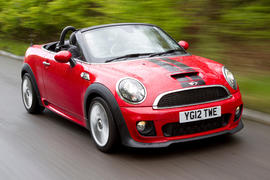 The Mini Roadster is punchy, practical and fun, but no match for a proper sporting roadster

Plans to base the production version of the Superleggera around the UKL platform suggest it could be produced  on the same production line  as the hatchback at Mini’s Cowley plant in the UK.

A MINI which seems not to be designed by a middle aged northern European, far from overburdened with visual flair but trying desperately to recapture the funky days of youth. Better wait to see if it gets hit by the BMW ugly stick before it is produced. There are hints already of this around the nose.
Curly55 15 July 2015

Totally agree with Earl Grey, why wait until 2019. If it was on the market tomorrow at a reasonable price I would seriously consider one even if it only has 200hp, 315 in my M135i gets boring eventually & this thing just takes my breath away. The hybrid will be even better if the weight does not get in the way.
n. leone 15 July 2015

Could the readers be reminded who designed this car? It is certainly not a creature of BMW, is it?
View all comments (15)