BACK TO ALL NEWS
Currently reading: Mercedes pulls PHEVs from production to make way for third-gen tech
UP NEXT
Mystery Ferrari LaFerrari prototype spotted with new bodywork

Mercedes-Benz has pulled plug-in hybrid versions of the C-Class, E-Class and S-Class from production, as well as all GLE models, to make way for their successors.

The trio of PHEVs, plus the one GLE PHEV that departs along with the rest of the range, will be replaced in the coming months by models utilising Mercedes' most advanced electrified powertrains, described by the company as “third-generation” technology and marketed under the EQ banner.

The new EQ system, first announced in the spring, comes exclusively with Mercedes’ nine-speed automatic gearbox, which is packaged together in same unit with the clutch and electric motor.

The electric drive from this tightly packed unit has been uprated so it now contributes 121bhp and 325lb ft of torque alongside each model’s respective combustion engine. Mercedes said the top speed in electric mode for its third-generation system is now 87mph, up from 81mph for the second-gen system.

Pure-electric range is also up by as much as 31 miles for each model — a gain of around 10 miles on the previous generation.

A Mercedes spokesman confirmed to Autocar that the first car to benefit from the new tech will be the S-Class. Already on sale in other markets, the updated luxury model will arrive in Britain in the autumn with a new S560e variant that uses a six-cylinder petrol engine with the electric drive unit, replacing the outgoing S500e.

In spring 2019, a C-Class PHEV with the same four-cylinder diesel as the E-Class PHEV will arrive. It will be shortly followed by an all-new plug-in A-Class that will be a new rival to the Audi A3 e-tron.

Although Mercedes has yet to officially announce the GLE’s successor, Autocar understands that the next-generation car is due later this year and will be offered with a GLE 560e, utilising the same plug-in powertrain as the S-Class PHEV. 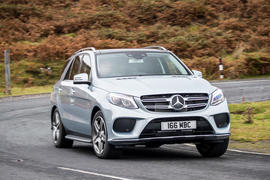 Time to change up

22 June 2018
I like and I respect Mercedes and its impressive heritage. The car world owes many of the technologies which are in common use to this car maker. Mercedes used to determine the direction that the car world was going to take. Hope they can ditch diesel and regain this leadership.

Panic measures, their particularly short range hybrids are no doubt coming out badly in the longer new WLTP tests so they need to up the range urgently otherwise the new ratings will stem sales.

I wonder what happened to the GLC hybrid? lots of press a couple of years ago but it just never arrived. If ever they needed it now!!!!!, with SUV sales rocketing and the diesels coming out disastrously under WLTP, not to mention the recall for cheating software.

I wonder what happened to the GLC hybrid? lots of press a couple of years ago but it just never arrived.

You mean the GLC 350e? It's available in such inconsequential markets as Germany and the US, but not the world's largest and most important car market that is the UK.

I wonder what happened to the GLC hybrid? lots of press a couple of years ago but it just never arrived.

You mean the GLC 350e? It's available in such inconsequential markets as Germany and the US, but not the world's largest and most important car market that is the UK.

Not sure why you are being factious, ahole. The point being the UK has a love of SUV's but a very emission based tax system, especially company car tax. If there is one place it would really sell well is the UK, they sell the hybrid car versions here, infact they have closed the order books on those because they can't meet demand. Mercedes are stupid. You know what its like to be stupid don't you?

The C, GLC and GLE are all available as hybrid versions in America. However the gearbox seems to be different on some models. Than stated in the article.

That is why these vehicles depreciate so much

Early takers are the guinea pigs for hybrid and ev, in a few years time ,solid state will take over from lithium packs or perhaps other technologies may be available.

The bulk of MB's business in the USA is from Leasing. By the time your expensive sicenc science fair on wheels begins to melt down you have traded the sucker in. Is it worth it for personal use...no! However, if you can find a way to offset it on your taxes why not.