From £9,1358
It's still not as refined as other SUVs, but in terms of sheer value the second-generation Duster is very much in a class of its own
Open gallery
Close

In a world where cars are becoming increasingly more advanced and complicated, there has always been something rather refreshing about the Dacia Duster.

Here is an SUV that, in an incredibly simplistic sense, offers you everything you need in a car - namely an engine, four wheels and a steering wheel - and absolutely nothing that you don’t. The entry-level version of the original Duster didn’t even come with air conditioning or a radio, which is certainly saying something in this day and age.

Welcome, then, to the new second-generation Duster that, in base-model specification, still doesn’t include a radio or air conditioning. However, this almost puritanical approach towards excess in the context of car manufacturing means that the Duster - indeed, the entire Dacia range - is still incredibly affordable. “Shockingly affordable”, even, if you take a look at the Renault-owned brand’s marketing material.

That suitably named Access model will set you back a miserly £9995, which is an increase of £500 over its predecessor. Aside from the new styling - which lends the car a wider, more muscular stance, despite it being almost identical in size to its forerunner - you now get electric power steering and LED daytime running lights as standard. Phwoar.

Our more luxuriously equipped Comfort test car, which sits above Access and Essential and below the flagship Prestige in the rejigged line-up, comes with a few more creature comforts. With a 113bhp 1.6-litre four-cylinder petrol engine driving the front wheels (there’s also a four-wheel-drive version available, as well as a front-driven diesel), it’ll cost you £13,195.

For that sum, you get a 7.0in touchscreen infotainment system with sat-nav, Bluetooth and DAB radio, rear parking camera and sensors, electric windows all round and electrically adjustable wing mirrors. New 16in alloys, meanwhile, are suspended by MacPherson struts at the front and a torsion beam at the rear. Talk about living the life of Riley. 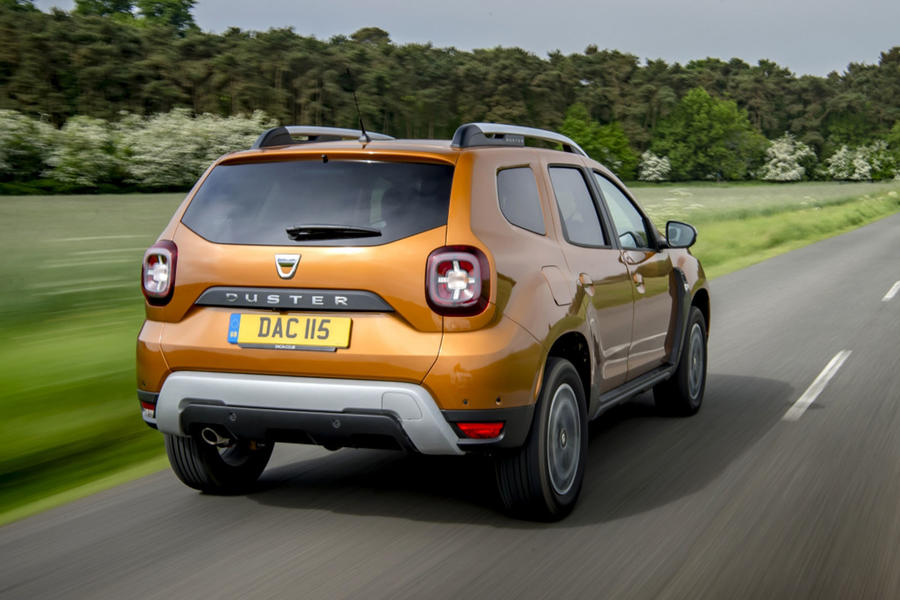 While Dacia has gone to some lengths to update and modernise the Duster’s interior, opening the door still reveals the sea of hard plastics you’d expect from a car in this price bracket. New seats provide improved support, while the driver’s seat now offers 60mm of height adjustment, as opposed to 40mm in the old model. The steering wheel adjusts for rake and reach, too.

Speaking of the steering, its new, electrically assisted set-up is one of the most easily noticeable changes between this car and its predecessor. Where the old model’s steering rack was heavy and devoid of feeling, it’s now far lighter, making the Duster that much easy to manoeuvre in tight spots. Unfortunately, though, it’s still not talkative in any way.

Not that this really matters, though, because the Duster isn’t a car for hustling down a challenging stretch of B-road. For starters, its naturally aspirated engine doesn’t offer much in the way of performance. Peak torque of 115lb ft is available at 4000rpm, so you need to wring the engine’s neck to get it to pick up the pace.

On the one hand, this isn’t too much of a problem, because the five-speed manual gearbox is light to shift and precise enough to navigate through the gears with ease. But on the other, the engine is particularly vocal at the upper climbs of its rev band.

That said, at least the Duster is decently comfortable. It by no means rides with the sophistication of pricier C-SUVs, with some shuddering over rough surfaces at low speeds, but in general, vertical and lateral body movements are tidily contained. Road noise is prevalent at a cruise, despite the car's dinky 16in wheels, and there's some wind buffeting around the wing mirrors, but you certainly won’t emerge from the Duster at the end of a long drive broken and defeated by fatigue.

Interior space, meanwhile, is plenty usable. Useful storage cubbies are dotted throughout the cabin, while head and leg room in the second row is abundant enough for two adults to ride in comfort. Boot space, meanwhile, comes in at 445 litres (in front-wheel-drive cars), which is more than the 430 litres you get in the Nissan Qashqai.

While the vast majority of our time was spent in the front-wheel-drive petrol, we did have a very quick go in a diesel 4x4 model on an off-road circuit, too. While this isn't yet on sale in the UK, it’s worth mentioning just how well it copes with the muddy stuff. Like, the seriously muddy stuff.

This tester - likely through a lack of skill and a deep-seated inability to properly follow instructions - ended up getting the Duster stuck in a rather deep body of water during a failed crossing attempt. But despite the horrendously boggy mud and the water that was seeping in through the doors, the plucky Dacia still managed to get free eventually, without the need for a tractor or a properly qualified off-road driver at the wheel. 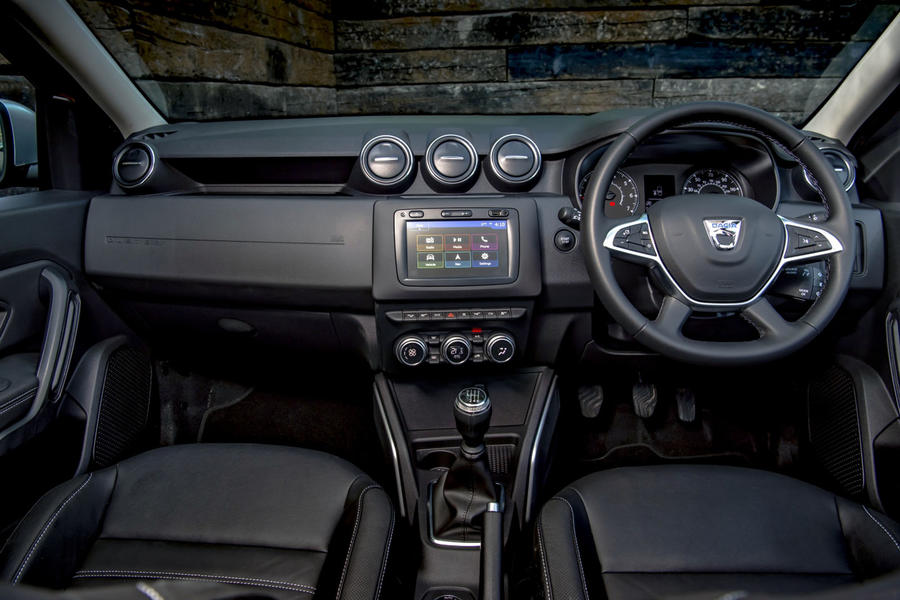 There’s a lot to like about the new Duster, then. It drives well enough, is comfortable enough, looks good and has sufficient space to suit the needs of the average family.

It’s not as complete or refined as the more traditional offerings in the segment (think the Nissan Qashqai and Volkswagen Tiguan), but it costs a fraction of their respective asking prices, so some compromise is to be expected.

If you can overlook these things, chances are you won’t be disappointed with the Duster. Its three-star Euro NCAP safety rating isn't great, but it's expected to retain 55% of its value after three years and 36,000 miles, which isn’t bad.

As an incredibly low-cost way of transporting a family and their associated clobber from A to B, then, the Duster is basically in a class of one. Well, if you rule out the option of buying a used car, that is. 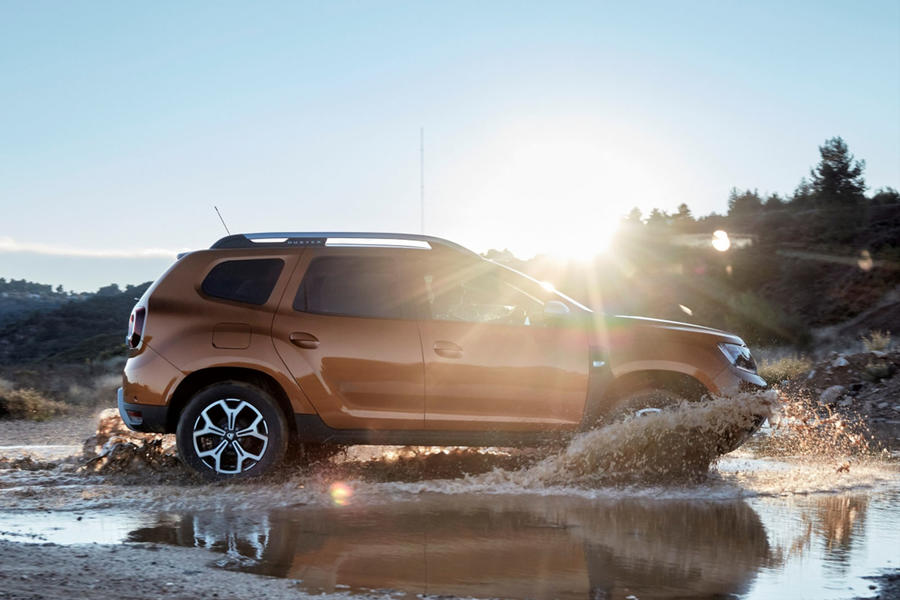 Lots of people saying that there isn't really another competitor - but the MG ZS is pretty close.  Going from £12,495 to £17,495 (for the auto) it spans the middle/top of the price bracket pretty well (albeit without 4WD) but does have more kit. Plus the ZS is a slightly nicer drive.

In a class of it's own

It certainly is. Cars are rusting badly underneath, serious corosion problems most cars being painted under warranty after two years.Fact.Granted they are cheap but boy do they feel it. Plus they are not particularly safe so everything is in its favour.
The new model does look good granted. Typically cheap cars don't depreciate as much because they are cheap. warranty and frugality perhaps the only real reason to purchase one.
Glyn Hall 24 June 2018

The Duster is Renault badged in South Africa!
https://goo.gl/qRK53D

Just a word on the commentor who said that Dacia had beaten the Chinese at their own game.
In South Africa they do have a number of Chinese brands: Chery, Foton, GWM, Geely, Chana, to name a few, and from what I saw, they weren't in the same league as the Renault/Dacia. Besides being cheaply made, which was apparent, they were unreliable.
I was told that vehicle taxation in China, on motor vehicles, was dependent on the age of the vehicle and got more expensive, the older it got. 10 years was the cut off where it was cheaper to buy a new car rather than keep the old one and vehicles older than 10 were scrapped. If this is correct it would account for the poor quality of the vehicles.