Hydrogen fuel cell cars are becoming a popular option for car makers seeking to overcome the restrictions from the limited range and long charging times of battery-based electric vehicles.

However, despite increasing efforts in the development of a global fuelling infrastructure, hydrogen fuel cell vehicles' complex nature and high production costs mean they remain a rare sight on our roads.

That hasn’t deterred a growing number of manufacturers from pouring vast amounts of money into the development of fuel cell technology, which can provide a car with the sort of range consummate to conventional petrol engine models while emitting nothing but water in the form of steam. This new Mercedes-Benz GLC F-Cell is the latest hydrogen-fuelled road car set to make production.

What is the Mercedes-Benz GLC F-Cell?

The advanced new SUV, based on the regular GLC, is the result of a development project started by Mercedes in 1994. Available on a customer lease scheme in selected countries, it follows the B-Class F-Cell, of which some 200 examples were built.

Mercedes claims the GLC F-Cell takes hydrogen fuel cell cars to a whole new level, leapfrogging the likes of the Toyota Mirai. The GLC F-Cell’s secret weapon is a fuel cell stack that is lighter and more compact than the unit in its predecessor, while offering 40% more power and using 90% less platinum.

The unit sits on the same engine mounts as more conventional petrol and diesel units in the new Mercedes SUV. It produces electricity from a mix of hydrogen and oxygen that is sent to a battery to power an electric motor mounted within the rear axle, which in turn drives the rear wheels.

From the outside, the only signs of the car’s advanced powertrain technology are some blue highlights within the grille and sills, together with bespoke wheels and F-Cell badges at the rear.

Along with its newly developed fuel cell stack, the GLC F-Cell accommodates two carbonfibre hydrogen tanks – one within the centre tunnel and the other underneath the rear seat, each pressurised to 700 bar. This permits a refuelling time of less than three minutes, similar to petrol and diesel cars. With 4.4kg of hydrogen on board, Mercedes claims a range of up to 272 miles.

In a clever set-up mirroring that of the GLC 350e plug-in hybrid, Mercedes has combined the fuel cell stack with a 13.8kW/h lithium-ion battery mounted within the floor of the luggage compartment. This enabled the GLC F-Cell to be plugged into mains power via a socket mounted within the rear bumper to increase its range by a claimed 30 miles, giving it a potential range of more than 300 miles in total. 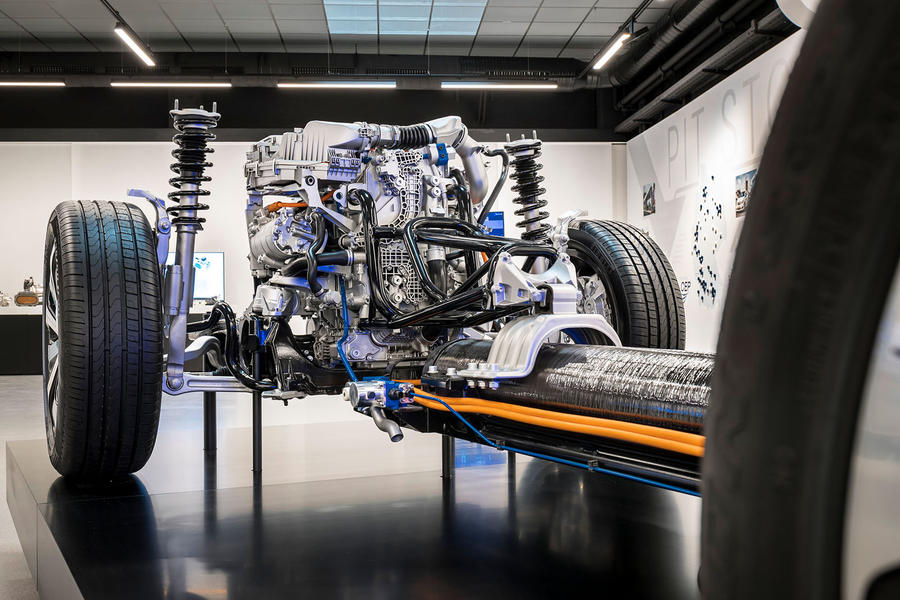 The electric motor at the rear is the same as that set to be used by the upcoming EQ C – Mercedes’s first dedicated battery electric vehicle. With 197bhp and 258lb ft of torque, it provides the GLC F-Cell with a 0-62mph time of less than six seconds and a limited 100mph top speed.

The GLC F-CELL will be offered exclusively with rear-wheel drive to cut complexity and reduce weight. However, the addition of the lithium-ion battery and associated power electronics means it tips the scales above other GLC models at 2055kg.

While it sounds complex, the GLC F-Cell seems just like any other modern EV to operate. The generous torque from the electric motor provides urgent power as we set off, with swift and silent acceleration.

A Mercedes development engineer is behind the steering wheel for our introductory ride, which takes in nearly 30km of country roads around Mercedes’s R&D centre south of Stuttgart, Germany.

On the move, the GLC F-Cell is nicely refined, running with whisper-quiet qualities at posted limits. The delivery of power is seamless, even when our driver begins switching through the driving modes. One noticeable absence is any vibration caused by the pump used to feed the fuel cell stack with hydrogen. It has been an annoying feature in previous fuel cell vehicles I have driven, including the Toyota Mirai.

The suspension has been tuned to cope with the added weight of the battery. But while it manages to provide acceptable comfort on smooth surfaces at higher speeds, it was a little unsettled when faced with pothole covers and the like at lower speeds. In this respect, it feels much like the GLC 350e plug-in hybrid.

A number of subtle changes within the interior signal this is anything but a conventional GLC model, including digital instruments that display the amount of hydrogen in the two tanks and the charge of the lithium-ion battery. An energy flow display within the infotainment monitor also allows you to keep tabs on what power sources you are using.

In terms of practicality, the car can’t quite match its petrol and diesel engine siblings. The packaging of the rear hydrogen tank has raised rear seat height by 40mm, reducing head room in the process. The mounting of the lithium-ion battery within the floor of the boot, like that of the GLC 350e, has also reduced luggage capacity. Still, there’s more than enough room for daily use. 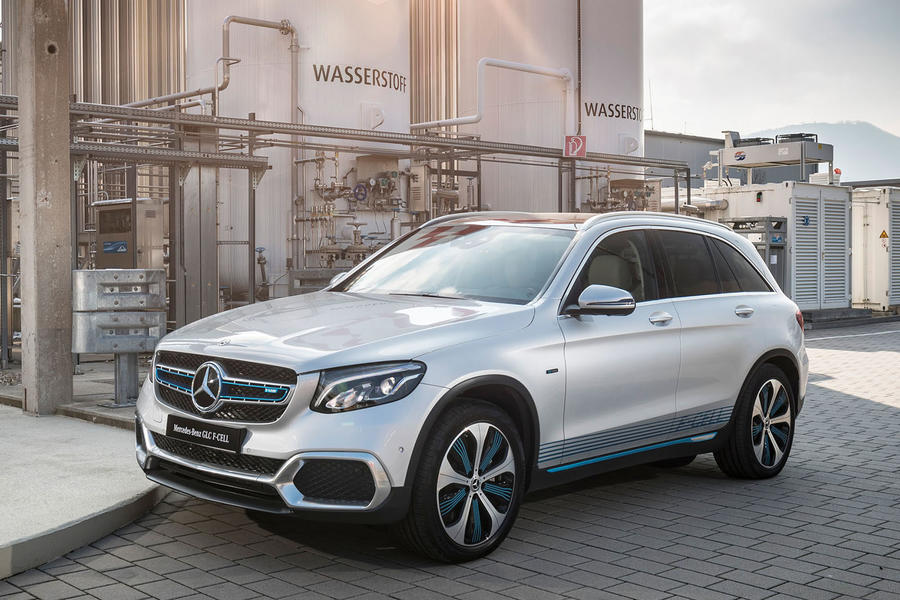 Packaging compromises aside, the GLC F-Cell is well conceived, combining the zero-emission qualities of a battery electric vehicle with the potential range of a petrol-engined car. It is just a pity that the technology behind its powertrain has advanced at a greater pace than the infrastructure it requires to become a truly viable option. As long as hydrogen fuel stations remain rare, so will its sales potential.

Will the Mercedes GLC F-Cell come to Britain?

Owing to the almost complete lack of commercial hydrogen fuelling stations in the UK, British customers are initially denied the GLC F-Cell.

Mercedes reluctantly confirmed to Autocar that the model has been engineered in right-hand drive for the Japanese market and there are increasing signs that we could see the GLC F-Cell on UK roads some time in the future. Plans are being drawn up by the Fuel Cell Council – an organisation that consists of car makers including General Motors, Great Wall, Honda, Hyundai, Mercedes and Toyota – for a more comprehensive fuelling infrastructure.

Mercedes lagging behind JLR yet again

While everyone else is putting their time, effort and money in do developing viable and production EVs, inclduing infrastructure, Mercedes continues to persist with the wrong technology. But then this is Mercedes all over and shows ye again their lack of engineering and technical prowess and a lack of foresight. When Jaguar, Land Rover and Lexus are leading the way in EVs and hybrids in the premiun sector, Mercedes again lags behind them both.

They aren't lagging at all

All that extra weight for 30 miles tops. Might as well add another Hydrogen tank.

All that extra weight for 30 miles tops. Might as well add another Hydrogen tank.

I think they want to go the plug-in route as people can identify with that. That and pure hydrogen cars have have failed to take off on their own stream so to speak

A genuine question, but how often do you drive 300 miles and then need to do another 300 miles straight away? My partners family insist on being able to drive from Switzerland to London in the minimal amount of time possible, but this is doable today taking 60-90 minutes longer than with a petrol/diesel car in a Tesla.

If you're a sales rep doing huge amounts of mileage a year I don't see this, as in the cities there are now hundreds of charging points everywhere and the customers of said rep will surely start to be installing their own charge points for their own staff. Given the value of electricity will be about the same as a couple of nespressos and biscuits I can't see the price being an issue.

I average 50 mph so to do 300 miles would take 6 hours, I need more than 5 minutes refresh time before raking up another 6 hours in a car.