BACK TO ALL NEWS
Currently reading: Hyundai Nexo hydrogen fuel cell-powered SUV revealed at CES
UP NEXT
Analysis: winners and losers in the automotive CO2 race

Hyundai has revealed the Nexo – its latest hydrogen fuel cell electric vehicle (FCEV) – at the Consumer Electronics Show (CES) in Las Vegas. It has a range of 500 miles and 20% more power than the ix35 Fuel Cell.

Rather than being a variant on an existing member of the Hyundai line-up, the Nexo is a model in its own right and built on a dedicated platform. It will serve as the technological flagship of the brand's ever-growing range of electrified cars, with 18 due for launch by 2025.

Hyundai claims that the powertrain is as durable as internal combustion engine-powered cars, and can be refuelled in as little as five minutes, compared with the several hours of the latest electric vehicles on the market. Despite electric motors being remarkably refined, Hyundai claims to have further improved this for the Nexo - all moving parts are under the bonnet. It's grown in almost every dimension compared with the ix35 too - at 4671mm, it's 262mm longer; it's 38mm wider at 1859mm; but it's 25mm less tall at 1630mm. Interior space is due to grow, as the wheelbase has stretched by 150mm.

The Nexo will be available in select markets from early 2018, although a Hyundai spokesman said that UK cars may not arrive until the end of the year.

It will also be Hyundai's first test of fully autonomous systems because the car's powertrain is ideal for coping with the high energy demand of autonomous systems – their data handling, communication and sensors – and it has a long range.

These systems include a next-generation Blind Spot Monitor, which demonstrates to the driver their position in relation to other road users, and Lane Following Assist (LFA) and Highway Driving Assist. The former can steer, accelerate and brake the car at speeds from standstill to 90mph. The latter uses map data and builds on LFA to control the car's speed according to the the speed limit of the road, as well as using sensors to detect environmental conditions. The Nexo is also fitted with a remote parking system, enabling the car to park itself with or without a driver aboard.

The model's unveiling comes shortly after Hyundai’s announcement that its first fully autonomous car will arrive in 2021, as a result of the brand's partnership with self-driving technology company Aurora.

Aurora will assist Hyundai in bringing the two brands' technologies to market as quickly and safely as possible, with Level 4 autonomy targeted. Work on the back-end development of the technologies has already begun.

At last year's CES, Hyundai showcased the Ioniq Autonomous, the first tangible product in its push for driverless motoring.

The design of the car draws heavily from the FE Fuel Cell Concept shown at the Geneva motor show last year. It's likely to closely match the price of the ix35 Fuel Cell, which started at £53,105. 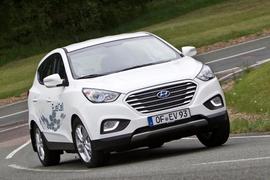 haha! Who didn't know little xxxx would get all wet & dribbly about this one!?

I think a much better alternative to full electric vehicles. If the price was right, I would go for one of these rather than all electric.

It has a 40kW/h battery which is as big as the one in previous Leaf and bigger than the i3's! Why not dump the inefficent Hydrogen cell, increasse battery to 75kwh, make it a plug-in, knock at least £15,000 off the price, quarter the running costs and service cost, making it more environmental, more space efficient, possible to refilll anywhere etc.

People will need hundreds of miles range for a different reason

Simply because charging network won't be able to keep up - in a world of rapidly increasing numbers of electric cars, assuming governments are truly going to impose 100% electrification over the next 30 years. There is absolutly no chance that everyone will be able to charge home - the way it's practical today when electric cars are owned as second cars by fairly well of people that have lawns to park their car in front of. However that's an entirely different issue -- when we're talking about all the millions of people, who don't have lawns and are likely to have to put their trust in public access to charging. That means I think -- most people won't be able to charge every day. Which I think shall be the very reason why most people shall need hundreds of miles batteries. So that they can reserve their weekly charging time, and still have enough range for their daily drives until their next reserved charging time, the coming week after. Or maybe they'll be able to charge twice a week. But my assumption is that, infrastructure shall lag so far back -- that people shall need massive range in order to be unlikely to end up out of juice. Add in the hours of charging each shall need -- and I don't think there ever shall be enough charging points available publickly to remove the need to reserve charging points ahead into the future. And moreover it shall be unlikely that most shall be able to charge every day.

Go on then, using your research what is the minium range (in real world miles) an EV has to have for EV's to sell?

Now you were altering the subject

As I was talking about infrastructural loads - as numbers of electric cars are set to increase massively if plans for full electrification are implemented. I'm no saying those plans shouldn't be implemented - only making the point, that the cost in the necessary beefing up of electric infrastructure will be very great. And moreover if increase in numbers of electric cars is at the planned pace -- then infrastructure is unlikely to be beefed up rapidly enough. That users shall be able to do what current average users do, i.e. charge their cars from their home grids. As I pointed out, for most current users electric car is a second car - these people tend to be wealthier on the average than would be true about average users in a hypothetical future of full abandonment of ICE cars. Today these people live where they can park their car outside their lawn - even on the grounds of their personal property. However for the millions of poorer people living in varied multistory apartment buildings, they don't usually happen to have a convenient lawn nor freuqently access to a convenient personally owned parking space where they are likely to have access to their own apartment electricity. Meaning, millions of people in the future are likely to be dependent upon access to charging facilities that are not near the viscinity of their personal properties. You appear incapable of understanding - that current average users, won't be typical electric car users in such a future. That millions of people will be dependent upon access to charging facilities that would be built by their local municipality or the government or local firm. It appears extremely improbable that such facilities would be common enough in that scenario that people could be certain -- to access a charging facility at will. Thus, I told you that as many would be unable to be able to access a charging facility at will -- that in the future persons without the ability to charge from their own home electricity would probably have to reserve charging dates -- that they'd be unlikely to have access to charging every day. Thus that in the future demand for hundreds of miles range batteries would probably not the least be for the reason, that people would have to be able to drive for days between charging - i.e. from one reserved charging date to the next. Thus that charging behavior would resemble more top up behavior today when people top up their tanks say once a week not every day. Because I reckon charing facilities to be unlikely to be sufficiently available to cope with every day demand. In a future with millions of electric cars. Especially when it's kept in mind that each would have to charge for hours at a time. I've told you my arguments for my position -- I'm not going to reply further. Have a good day.