Maserati has outlined further details of its bold revival plan, including the name of its new, smaller SUV model that's due in 2021.

The brand's important second SUV, following the larger Levante, will be called the Grecale - named after the "fierce north-east wind of the Mediterranean Sea".

Destined to play "a key role in the brand's development", the Porsche Macan rival will be built on the same production line as the Alfa Romeo Stelvio in the Fiat Chrysler Automobiles (FCA) plant in Cassino, Italy.

It will also share much of its underpinnings with the Stelvio, and a fully electric version is also due to arrive by 2022. However, the combustion engined models will use Maserati rather than Alfa-sourced engines.

Maserati global planning boss Francesco Tonon told Autocar that the Grecale will be "the most practical in its class, but it will also be luxurious", adding: "It will feature the best in class design and features. Of course it's still a Maserati, but it will also offer best-in-class performance and handling".

The new SUV was first confirmed back in 2018 by former FCA boss Sergio Marchionne as part of a total overhaul of its product line-up. Also included are the MC20 in three variants: coupé, 'Spider' convertible and fully electric, plus a new Granturismo and Grancabrio, due in both internal-combustion and electric forms.

By 2023/2024, the brand will also have a new-generation Levante and Quattroporte, also both available with an electric powertrain. In top-spec form, this will use an 800V electrical system and three motors. 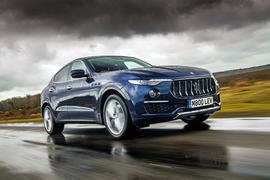 Can't really judge it on one image, but the front looks fine,it's just what's going underneath and how good the interior will be, I'm sure there'll be least four power choices, the EV choice will be pushed heavily just to show how committed Maserati are.

Such is the modern world, the

Such is the modern world, the halo model MC20 being there to entice people in to buy SUVs LOL