BACK TO ALL NEWS
Currently reading: Maserati to launch three EVs in 2023 and axe Ghibli
UP NEXT
Rolls-Royce road trip: remembering the marque's epic seaplane racers

Maserati to launch three EVs in 2023 and axe Ghibli

Maserati will launch three electric cars next year, the Italian premium brand said today as it announced its 2021 sales figures.

It follows parent company Stellantis’s announcement earlier this month that Maserati would be one of a handful of its brands to go electric in all models launched from 2025. The entire line-up will be electric by 2030. 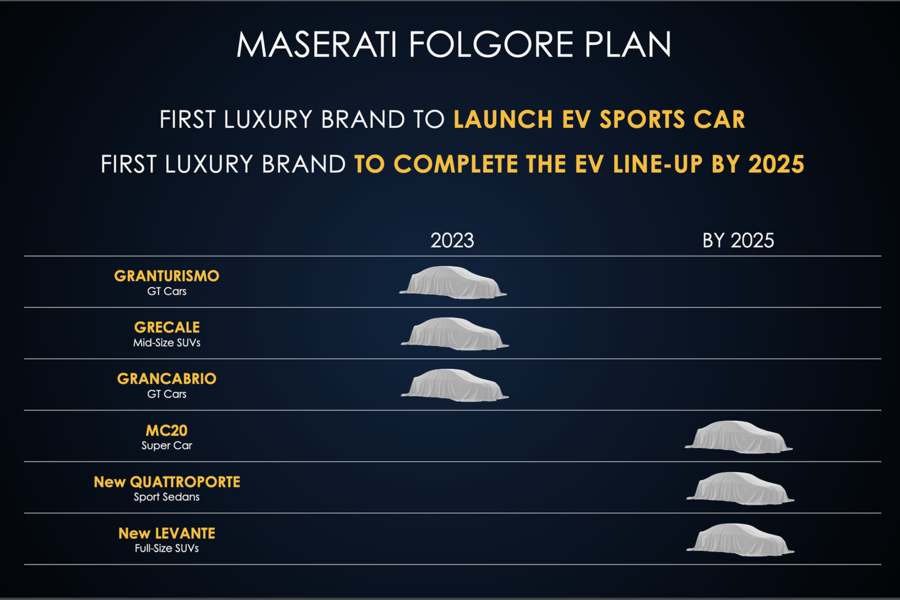 The electric range, named Folgore, will be led by a new 1200bhp Maserati Granturismo coupé, due to be revealed later this year before arriving in 2023.

Maserati said this “will offer cutting-edge technical solutions derived from Formula E, superb performance, comfort and elegance, all typical of the Trident”. It added that it would achieve a sub-3sec 0-62mph benchmark sprint and a top speed above 186mph.

The soft-top equivalent, the Maserati Grancabrio, will also arrive next year, the firm confirmed.

The delayed Maserati Grecale SUV, which will be revealed imminently, will first launch with internal combustion engines, one of which features mild-hybrid technology, but will also receive an electric version next year.

Beyond next year's model onslaught, Maserati outlined three more models that will have electric variants arriving before 2025: the MC20 supercar and next-generation Maserati Quattroporte saloon and Maserati Levante SUV.

Although the Ghibli accounted for a third of sales last year, it doesn't factor into the brand’s future plans. However, a production end date for the large saloon, which was launched in 2013, hasn't yet been confirmed.