BACK TO ALL NEWS
Currently reading: Lamborghini SCV12: track-only model previewed ahead of unveiling
UP NEXT
Fisker goes radical with Pear EV SUV

Lamborghini has revealed the first images and details of a new track-only hypercar developed by its Squadra Corse motorsport division.

Called the SCV12, it has been shown in full in prototype livery for the first time ahead of a full wraps-off unveiling later this summer. The Italian brand says it features the most powerful version of its naturally aspirated 6.5-litre V12 it has built to date, claiming it's "capable of exceeding 830hp (819bhp)".

The SCV12's motorsport-centred development means aerodynamic efficiency has been a core focus, with Lamborghini claiming it produces more downforce than a GT3 racing car. Visible from the front is a double air intake and central rib, which sends airflow to a ram-air scoop on the roof. A large front splitter, vertical fins on the sills and a custom-built carbonfibre wing are further downforce-boosting add-ons. 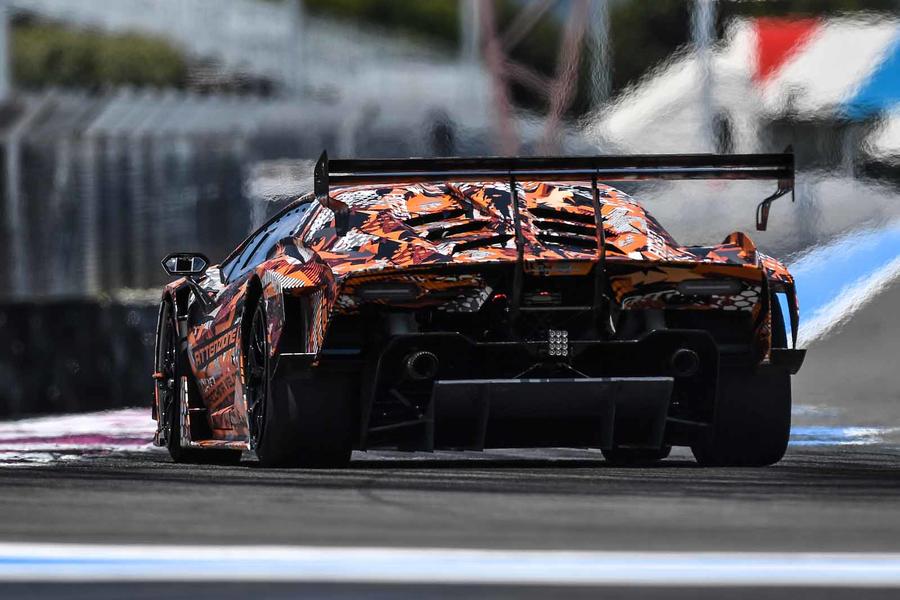 Although the SCV12 is based around the underpinnings of the Lamborghini Aventador, Squadra Corse has developed a "new fully carbonfibre chassis". This ups the power-to weight ratio, although no figures have been quoted yet.

The engine sends its power to the rear wheels only through a six-speed sequential gearbox that's used as a structural element within the chassis.

Further race-spec upgrades include pushrod rear suspension installed directly onto the gearbox, while there are also specially developed Pirelli tyres fitted to magnesium wheels (19in at the front and 20in at the rear).

Last year, Lamborghini boss Stefano Domenicali confirmed the firm is evaluating a entry into the 2021 Le Mans hypercar category. It's highly likely that if the go-ahead is given for racing, the SCV12 will be the base car.

No pricing details have been revealed for the new model, which follows on from the road-usable SC18 one-off, but production will be extremely limited.

As with many restricted track-only models, customers will participate in "advanced driving programmes at some of the world's most prestigious circuits". This includes technical assistance from Squadra Corse engineers.

When did Lamborghini stop

Coronavirus and the ensuing

Coronavirus and the ensuing recession will kill off this hyper-car track-only market.

At least there won't be any more need to wade through the Thursday & Friday articles on these fly-by-night start-up companies.

Coronavirus and the ensuing recession will kill off this hyper-car track-only market.

At least there won't be any more need to wade through the Thursday & Friday articles on these fly-by-night start-up companies.

If you can afford cars like these, then your probably well protected, and your assets are in a secure place to weather the fallout from the last ten years.

It's only Wednesday - I thought million-horsepower hypercars are only released weekly on Thursdays and Fridays.

At least this one will actually materialize.  But will the buyers now?