BACK TO ALL NEWS
Currently reading: Ineos Grenadier: why a chemical firm is creating a 'serious' off-roader
UP NEXT
New Porsche Taycan Sport Turismo on sale from £73,560

Ineos Grenadier: why a chemical firm is creating a 'serious' off-roader

The people behind one of the most interesting niche-market cars of the decade, the Ineos Grenadier, need you.

If you like a bit of serious off-roading, they want your ideas, your opinions and the benefit of your experience - particularly if that experience involves a Land Rover Defender. In the medium term, they will want employees, too, of course. But, most of all, as movie robot Johnny Five once said, they just want your ‘input’ – and plenty of it.

As of this week, there’s a website you can visit to deliver that input (Land Rover ought to be doing but isn’t: building a true successor to the original Land Rover and a world-class, uncompromised, affordable off-roader. 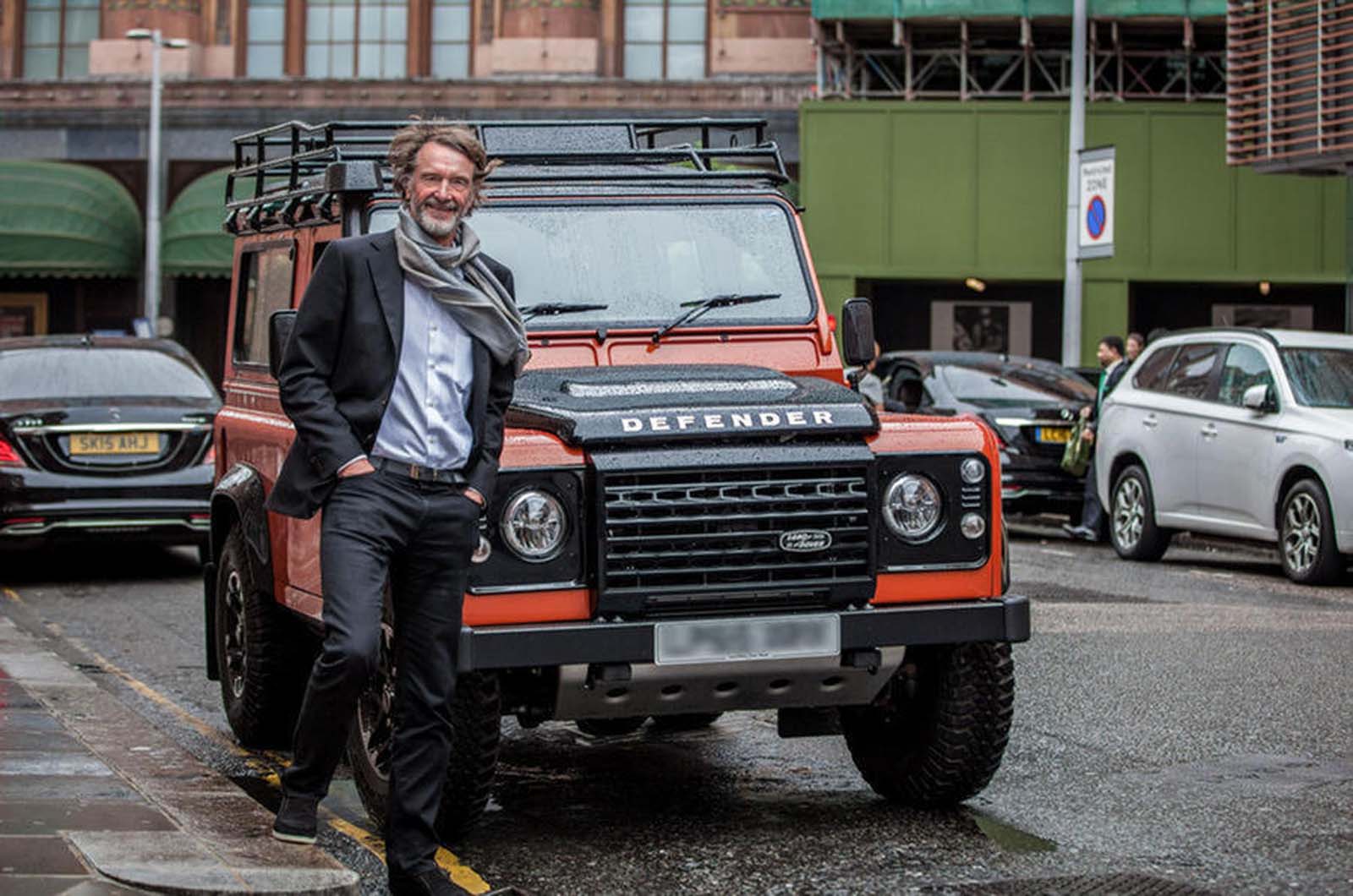 That mission, cooked up by Ineos chairman Jim Ratcliffe and a few associates one Wednesday evening in The Grenadier pub near the company’s Knightsbridge HQ, is what’s currently driving the Ineos Automotive team. Their finished car will be revealed in sketches next year before entering preliminary production in 2019 and appearing in finished form in 2020.

Ineos Automotive announced its intention to create a car that would pick up directly where the now-discontinued Land Rover Defender left off in 2016. It describes Land Rover’s attitude to its proposals as ‘neutral’. As yet, of course, there’s no finished design for Gaydon to take exception to – and, with Jaguar Land Rover's official Defender replacement set to come to fruition in 2019, Ineos will need to proceed carefully with what it describes as “an evolved Defender made as if it were simply a modern, ‘new series’ car”.

The company won’t fear Land Rover’s lawyers, though: being one of the largest privately owned industrial companies in the world, Ineos recorded just under £4bn in profits last year. It is not the kind  of minnow to just back down and  go away, you’d guess, after receiving a stiffly worded legal letter. 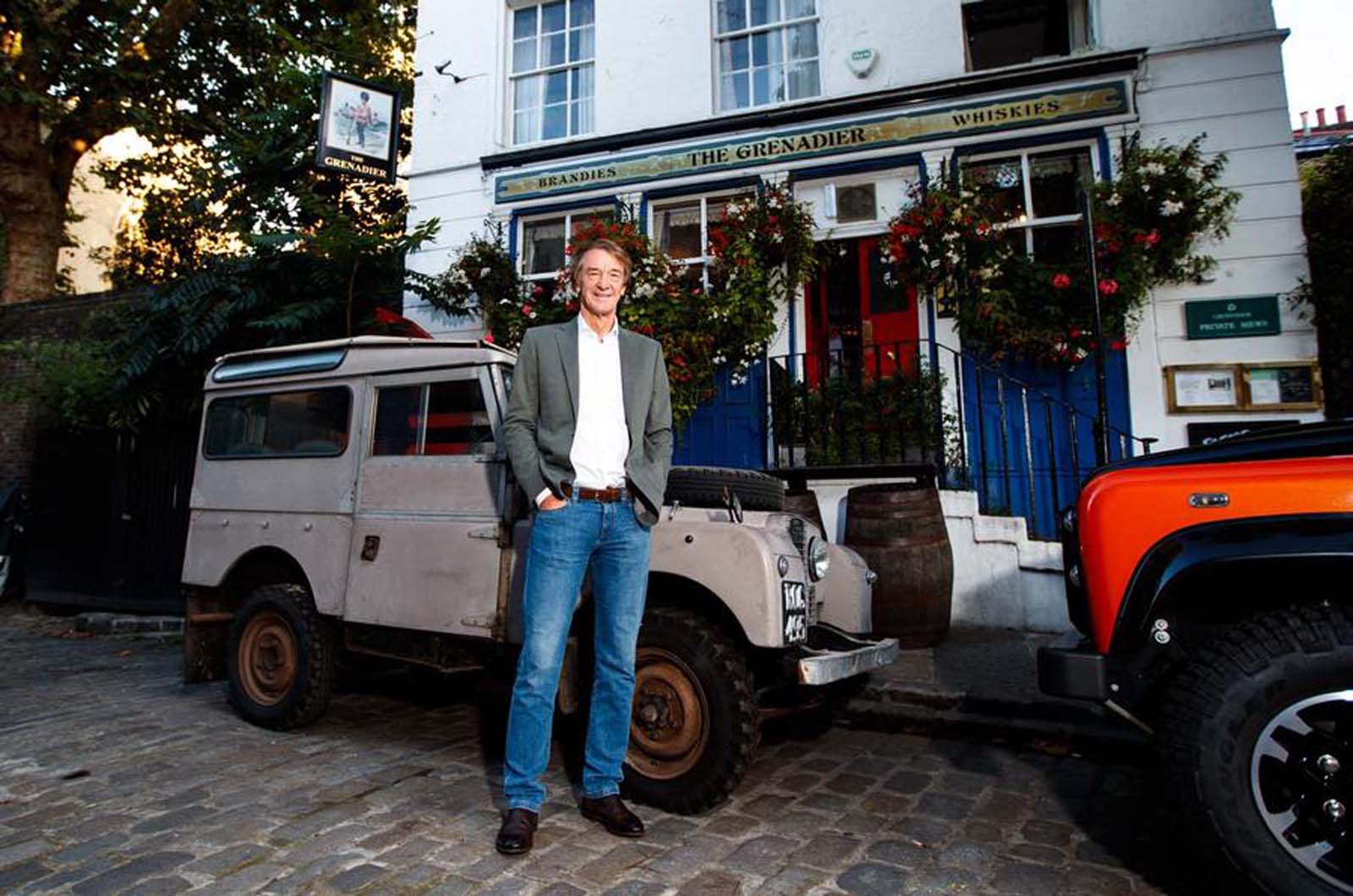 Ineos is confident that it will  avoid running into legal problems with Land Rover, however. The positioning of the Grenadier, and the contrasting direction in which Land Rover’s own Defender is reportedly heading, are the reasons why. Both cars will doubtless come to market cracked up as the most capable 4x4 in the world – but with the Defender rumoured to be moving to aluminium monocoque construction and with increased technological complexity, Ratcliffe says Ineos will position its alternative as simpler, more traditional, robust and affordable. The Grenadier will be a car with a lightweight aluminium body, separate ‘ladder frame’ chassis, proper axle articulation, steel coil suspension and a choice of petrol, diesel and hybrid powertrains.

“The Grenadier has three key strengths which we have to keep front of mind: design, capability and reliability,” explains Ratcliffe.

“We don’t need to go beyond what a Defender has in terms of off-road capability, because there’s no need to; nothing does it better. Our challenge is to reproduce that capability in a vehicle that meets current global safety, conformity and emissions regulations. Above all, we must be sure not to soften the car for road use; that’s the way the majority of so-called off-roaders have gone and we must not accept compromises.” 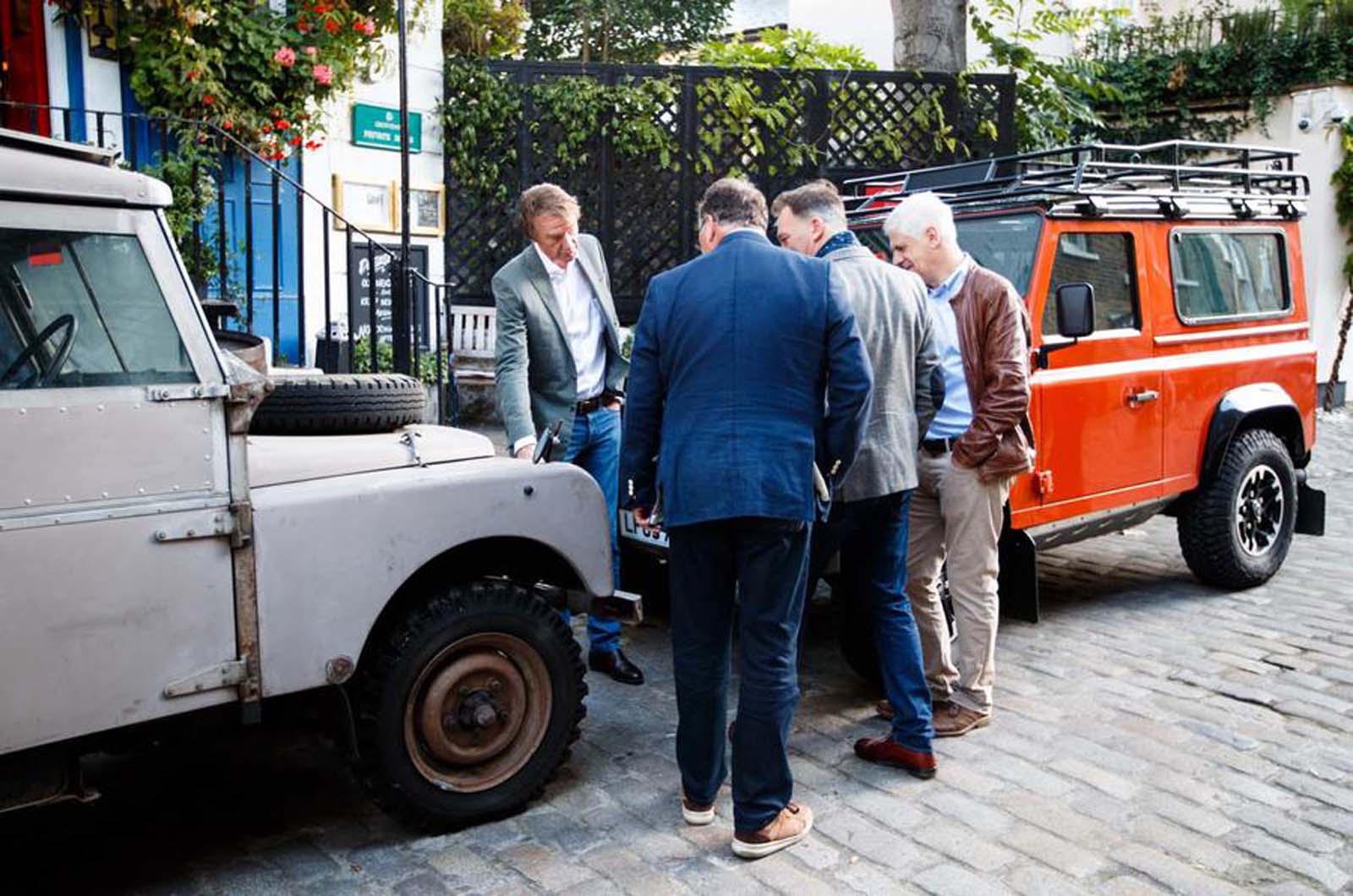 Ratcliffe explains that Ineos is applying a very detailed German-style engineering approach to the car, already working closely with tier-one component suppliers to redesign their existing off-the-shelf systems for greater robustness. Ineos also has ideas of ways in which it believes it can improve on the original Defender recipe.

“Why Land Rover would have bothered with rust-proof aluminium bodywork and then not give the original car a galvanised steel chassis, I can’t fathom,” says Ratcliffe. “Britain had galvanised steel lamp posts at the turn of the 20th century!

“Most Land Rover owners know that exposing your chassis to water makes it rot, but that’s also because the design of the ladder frame traps mud, which, in turn, traps moisture.

“We can design our car to avoid those problems. And, while we’re at it, we can make it more comfortable, quieter, better laid out and better sealed than the Defender was; we can address all of the old bugbears."

However, he adds: “Design is the area where we’ll need to put in a lot of hard work, though." Ratcliffe is dismissive about a lot of modern automotive design, describing most of the cars he sees as “jelly moulds”.

Who is James Ratcliffe?

James Arthur Ratcliffe has a claim as one of the richest and most successful British post-war industrialists.

A chemical engineering graduate in 1974, he studied business and finance before founding chemical engineering group Ineos in 1998, buying up unwanted and undervalued facilities for the company from the likes of BP and ICI and turning their fortunes around. Ratcliffe remains the group’s majority shareholder. In 2007, he edged out Sir Richard Branson for a spot in The Sunday Times Rich List of the top 10 UK billionaires. 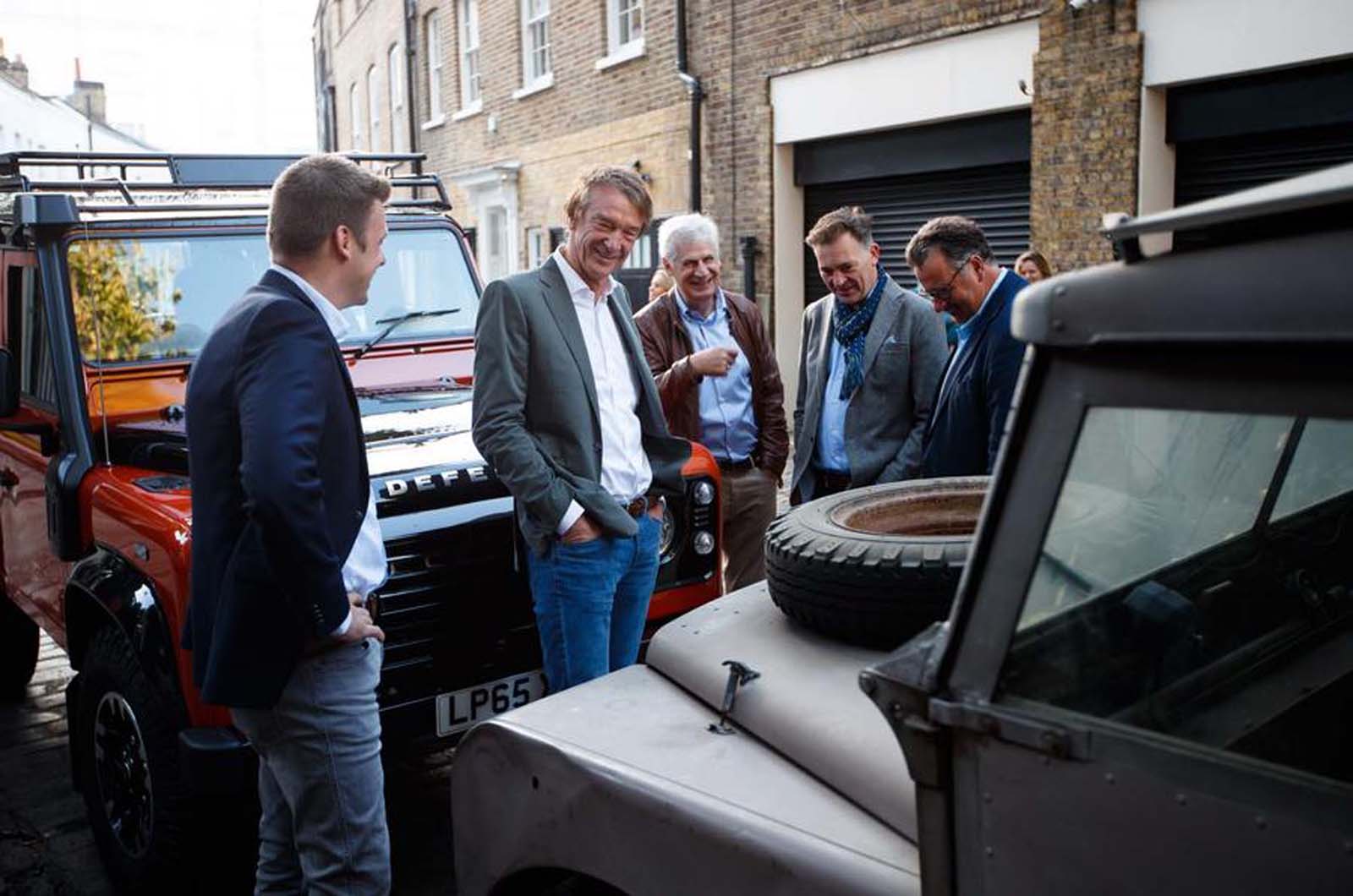 A fan of extreme sports and global adventuring, Ratcliffe has run marathons, been on expeditions to both  poles and once crossed Africa  by motorbike with three broken bones in his foot. His adventures mean he knows the value of a true go-anywhere vehicle.

Ratcliffe, who has lived in Switzerland, is also a keen advocate of a UK free of  European Union influence and is an equally passionate defender of the potential of fracking to provide cheaper energy supply in Britain.

Marketing Exercise for a Fracking Business?

Is Ineos the same Company that is gambling with the safety of UK's Groundwater by Fracking some of our most beautiful Countryside?

Is this Cloud Cuckoo Land scheme just a useful marketing exercise to placate the Farmers of the UK, whose livelihoods they are about to put at risk?

"Some blokes in a pub"

Jim Ratclffe is no.18 in The Times Rich List for the UK's wealthiest people in 2017. A self-made multi- billionaire deserves rather more credit than assuming his idea is "batshit".

They have to hire designers, engineers, stylists, a warranty team, buyers, a sales and service team. Hire and train a manufacturing workforce. They'll need dealers, a spare parts network. All this before you get properly tedious and talk about quality, process, human factors, IT, systems, fixtures and fittings.

It could be done. But. Car companies do not spring up overnight, they take a lot of money to set up. Ineos are starting from zero and they cannot use one iota of the Defender's image or design.

To me the idea sounds very much like batshit. Just like Brexit come to think of it.