The Vanquish 25, debut project of former Jaguar design boss Ian Callum and his new Callum design group, has made its first public appearance at the Hampton Court Concours of Elegance.

The Vanquish 25 project forms part of a series of R-Reforged edition cars fully endorsed by Aston Martin, with customers able to upgrade their existing car, or have R-Reforged source one for them. UK-based R-Reforged has previously worked with Aston Martin on other projects, and will play a key role in the Callum project's customer experience.

Each finished car is expected to cost £550,000 including a sourced V12 Vanquish. Delivery of finished cars is due to start late this year and the full batch of 25 should be completed and delivered at the end of 2020.

The Astons will be returned to bare metal and rebuilt from scratch in Callum’s new Warwick-based workshops. They will incorporate dozens of subtle and not so subtle changes, some of which Ian Callum has wanted to make since his original Vanquish design hit production in 2001. 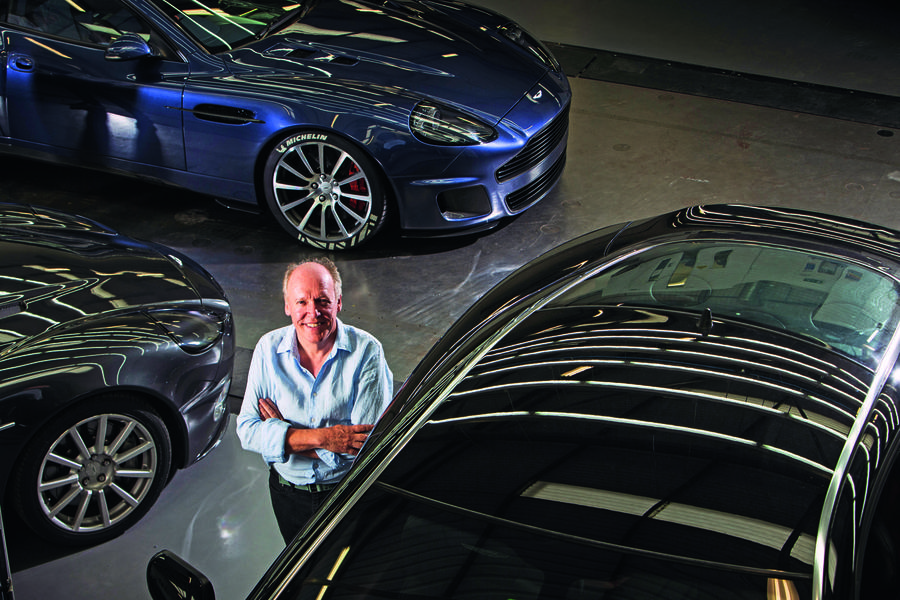 “There are things on the car I’ve always wanted to fix,” he said. “Now I have the chance.”

One strong theme running through the whole car is a unique fabric and trim pattern that Ian Callum, a loyal Scot, calls his “abstract tartan”. It appears in the Vanquish in surprising places, such as air outlets and speaker grilles, as well as seating and trim panels and will be used on Callum cars in future.

The partners at Callum have already built two Vanquish prototypes, one to show off their body and cabin developments and another to perfect a new suspension set-up that runs to bigger wheels and tyres, stiffer springs and dampers plus changes to anti-roll bars and suspension bushes.

All cars also get larger-diameter carbon-ceramic brakes plus new 20in wheels that use the Vanquish’s original pattern but are now offset to improve stability and stance.

Each V12 engine gets software, camshaft and exhaust changes to boost its power by around 60bhp to between 500bhp and 600bhp, depending on the model. A modern six-speed torque-converter automatic is offered, although many owners are expected to stick with the Vanquish’s original automated manual gearbox. 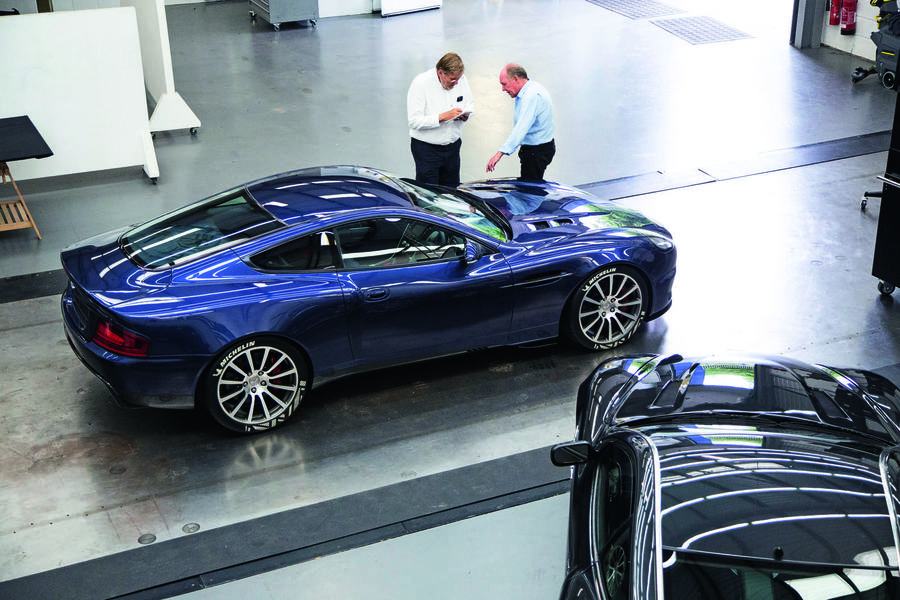 Ian Callum’s “new old” Aston is still very recognisable as an original Vanquish but has many modern details. There’s a new-style front bumper and grille, the latter subtly framed with carbonfibre and its horizontal bars most prominent. The lights are new LED units and the old, round foglights (Callum calls them “frog eyes”) are dropped in favour of air scoops for the bigger front brakes. There are new-design exterior mirrors (“we’ve dropped the old boxing gloves”) plus handsome side skirts incorporating a four-notch design that will become a feature of future Callum cars.

The exhaust’s back box has been reduced in size and incorporated into the rear bumper assembly to improve the efficiency of the rear diffuser and the car gets new LED tail-lights, an unusual and expensive feature (but necessary, Ian Callum insists).

More subtle improvements abound. Special Michelin tyres carry the Callum tartan on their sidewalls. The side windows are framed with specially fabricated trim pieces (not the Jaguar cast-offs of the original). The interior is completely retrimmed over new architecture, with the emphasis on high-quality materials and execution. The new front seats adopt a more sporting profile and the tiny rear seats have been ditched in favour of better accommodation for those in the front. There’s a new screen-based HMI and a demountable Bremont watch is fitted into the centre of every fascia. 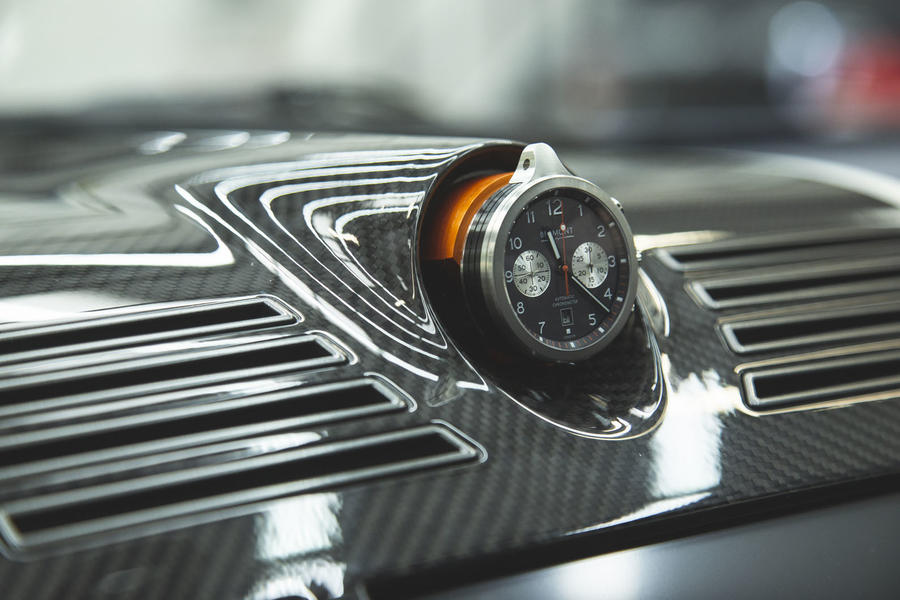 Although Ian Callum left Jaguar only a couple of months ago, his design partners — David Fairbairn, Adam Donfrancesco and Tim Bird — have been working on the project for much longer. “We want to get back to making things,” said Ian Callum. “The idea is to do bespoke projects for customers as individuals.”

​“I like that the Callum team’s first project is based on the original V12 Vanquish designed by Ian," Aston Martin's Chief Creative Officer Marek Reichman said. "Aston Martin Lagonda is very proud of the cars created during Ian’s time and they are an important part in both our heritage and evolution.”

The original Vanquish, born from a 1998 concept designed by Ian Callum before he joined Jaguar, introduced a new era of Aston design and construction in 2001 that led directly to the successful years of the DB9 and smaller V8 Vantage. The car, although handsome, never found buyers as readily as others and was discontinued in favour of a new, DB9-based Vanquish in 2007.

Donor Astons for the Callum treatment will come either from existing owners or the company will source suitable cars itself. A fairly restricted series of colours and interior treatments will be offered: Ian Callum and his colleagues aren’t keen to over-decorate their cars or offer wide colour or trim palettes. They hope customers will accept ”design guidance” and customer reaction so far seems to back that up. “Put it this way,” said the designer bluntly: “If we don’t like it, we won’t build it. 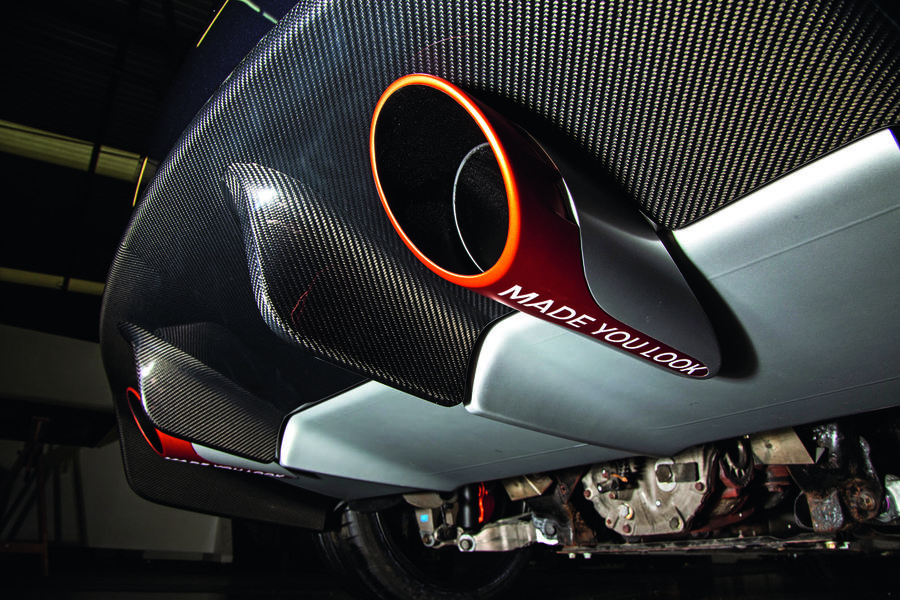 Opinion: This is design done differently

It’s easy to view Ian Callum’s new design house, Callum, as one of those places that set out to change everything about a car, and to charge a lot for doing it, for very little rhyme or reason. Such places exist. But Warwick-based Callum already looks very different.

This first Vanquish project shows what they’re about: a design group with the restraint and good taste of those used to setting the best OEM (original equipment manufacturer) standards, freed from big group conservatism to display originality and creativity that has had to be masked.

Ian Callum has had a burning ambition to improve the original Vanquish for at least a decade and has tackled the problem with subtlety and restraint. This is going to be a beautiful car, not ‘hot-rodded’ like so many aftermarket conversions but improved, updated and made more beautiful. The original designer will preserve the soul of his original fine car and he has other similar plans in mind.

The heroes of Ian Callum​

The Vanquish was already a very handsome, very brutish car.  This is next level stuff.

I always thought it was an

I always thought it was an absolute stunner but I could spend £550k a lot better than on one of these. Maybe a new DBS and a low mile Aventador for example. I'm sure you'll all be able to spend your fictional half mill better than on this vanity project.

Have to agree jmd67, not where my half million would go.

The exterior of the original Vanquish is stunning although as a minor gripe I always felt the rear looked a bit lame especially due to the graphics and lense colours of the rear lights. This reworked model addresses those IMO while the front looks even better and more aggressive. But more importanty is the revised interior which looks great and more fitting for a car of this type and price. Even back in the day the original model's interior looked awful, cheap and tacky. Although we should be grateful it didn't come with the Project Vantage concept's interior, what with its Ford Ka air vents.

Does the wheel and suspension spec really need changing?

"a new suspension set-up that runs to bigger wheels and tyres, stiffer springs and dampers plus changes to anti-roll bars and suspension bushes"

- oh dear, the same old designer fetish.  Better go to the dentist and have your fillings checked before chancing a bumpy road in one of these!

Aston's styling has been so

Aston's styling has been so boring for the last 20 years, so Callum's "talent" for designing bland, anodyne, characterless, me-too cars with most of their brand identity stripped away will fit right in.

Don't agree at all

2 September 2019
Astons were stunning since the launch of the Vanquish , each success model being better than the last, Astons are not lamborghinis, its only recently they have lost their way and gone down the German overly fussy , scalloped and sliced look , which I dislike entirely. I can see any model produced from 2000 on the VH architecture being considered absolute future classics. Back to this vanquish , I really wish they had changed the shape of the rear lights , they always looked over sized and clumsy , but I guess that would involve a large amount of re-engineering.

Time will tell, make it yours is another jingoistic phrase, be interesting to see some customers idea of tasteful upgrades.....?

Make it yours why not?! Tastefully upgrading woud be bliss?! maybe...?!