BACK TO ALL NEWS
Currently reading: Hyundai Kona: small SUV all but revealed ahead of June debut
UP NEXT
Volkswagen ID Buzz to kick-start wave of enthusiast-oriented EVs

Hyundai Kona: small SUV all but revealed ahead of June debut

The Hyundai Kona small SUV has been shown in more detail by Hyundai, confirming that the model we spotted undisguised ahead of its official debut this June featured its final design.

Hyundai also announced that the Kona will get a head-up display - a first for Hyundai - with class leading display quality, the brand claims. A Hyundai spokesman was unable to confirm whether the system would be standard somewhere in the range or an optional extra, but it's likely that it'll feature only on higher-end models.

The new picture is the only sighting of the vehicle without covers. Earlier glimpses were of a development car that was under camouflage at the Nürburgring.

The Nissan Juke rival is due to launch next month and will be priced from about £15,000.

It'll be the fourth SUV in Hyundai's line-up and is charged with taking Europe by storm, as part of ambitions to make Hyundai the biggest Asian car maker in the market by 2021. 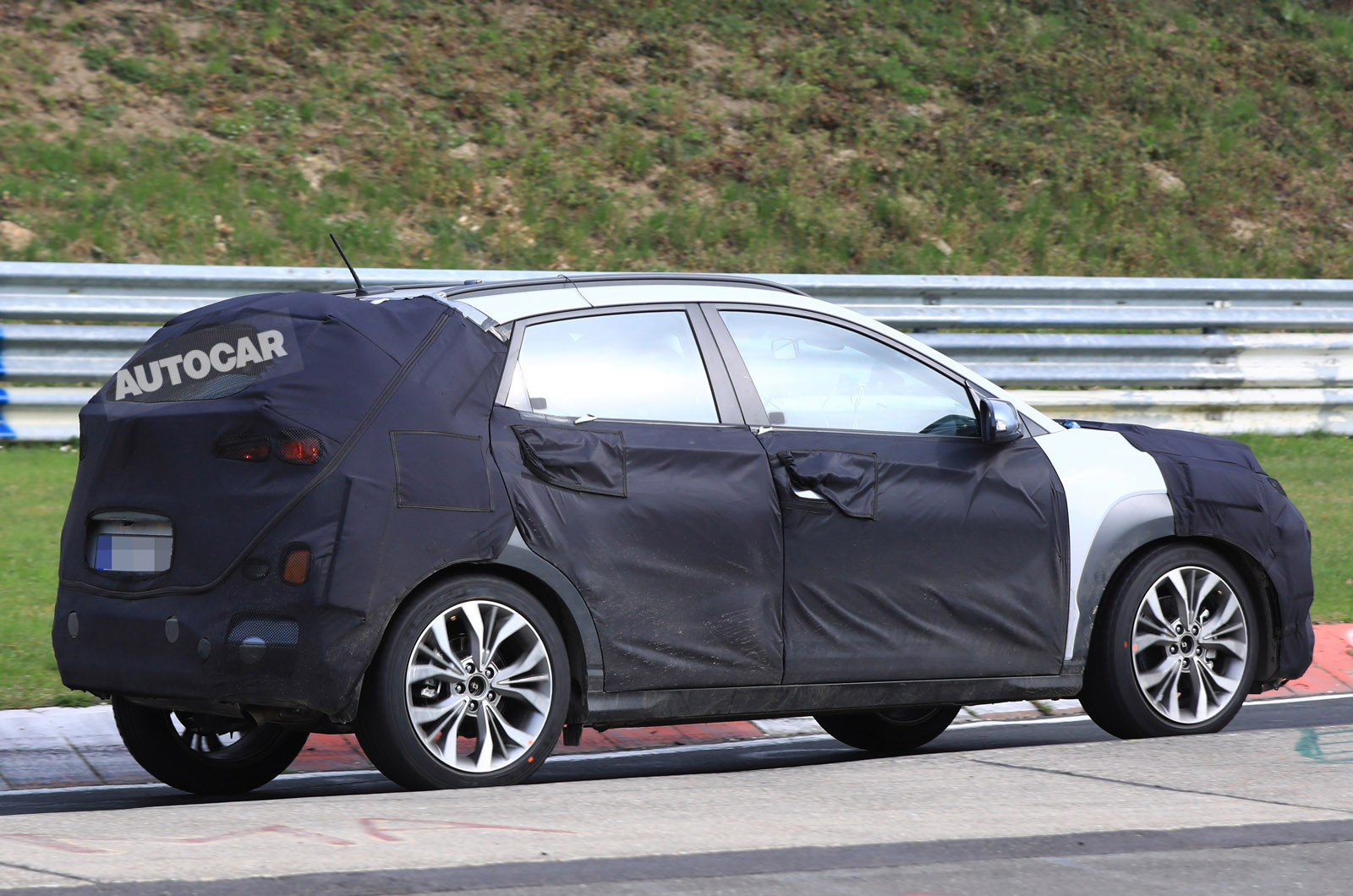 It'll be built upon a structure shared with sister company Kia's Stonic which is also due at the Frankfurt motor show this September.

The Kona is described by Hyundai as a 'true SUV', suggesting it’ll have four-wheel drive and could share technology with the larger Hyundai Santa Fe. It'll be a global product, unlike the i30, and enters one of the most fiercely competitive markets in the industry.

Its true SUV ethos would contrast rivals such as the Juke and Kia Soul which are marketed with a more urban focus.

As part of Hyundai's European push, the Kona, which gets its name from a district in Hawaii, will be followed by 29 more new model variants.

If you want to know exactly what this car looks like, carscoops.com posted a load of photos yesterday of a blue Kona snapped during a film shoot. Looks quite Mazda CX3 to me.
sierra 30 May 2017

Whilst marketed as protection, those external pieces of plastic prove very expensive, as any damage means replacement, whereas plain metal just requires filler and re-spray (see the Citroen Cactus)
xxxx 30 May 2017

Semi agree with you but quite often a deep scratch on a wing can cost a minimum of £200 to repair at the dealers garage, which you'd want to use if the car was nearly new and were worried about it rusting. Whereas a new plastic wheel arch bumper might only be £50 and you might well leave it as you don't have to worry about it getting unsightly rust.
A bigger problem might be in 5 years when any new unpainted replacement plastic parts will look stupid as they're never match an already faded part that seats next to it on the body
john386 18 May 2017

Hyundai have the Creta on sale in the Middle East. A 1.6 petrol is the only option though.
View all comments (19)