BACK TO ALL NEWS
Currently reading: Hyundai Ioniq hybrid autonomous – first ride
UP NEXT
Supercars to e-bikes: the story of Romans International

Doing so has meant catching up with rivals who have long-established brand names and decades more experience at building cars. But the new technology that is disrupting the industry is resetting the field, giving firms such as Hyundai an opportunity to prove they can outsmart and out-engineer their rivals.

The Hyundai Ioniq is a multi-faced demonstration of that. It’s available with three different powertrains – electric, plug-in hybrid and hydrogen fuel cell – all of which are pushing a still-developing technology. And it’s the Ioniq (in Hybrid form) which Hyundai has chosen to test its autonomous technology in.

At Hyundai Motor Company’s sprawling 3,470,000-m2 Research and Development Centre in Namyang, Korea, more than 13,000 staff are focused on developing future models for Hyundai and sister firm Kia – and the new technology that underpins them.

It was on the busy roads of that test centre that we were given a short ride in an early development version of a self-driving Ioniq. 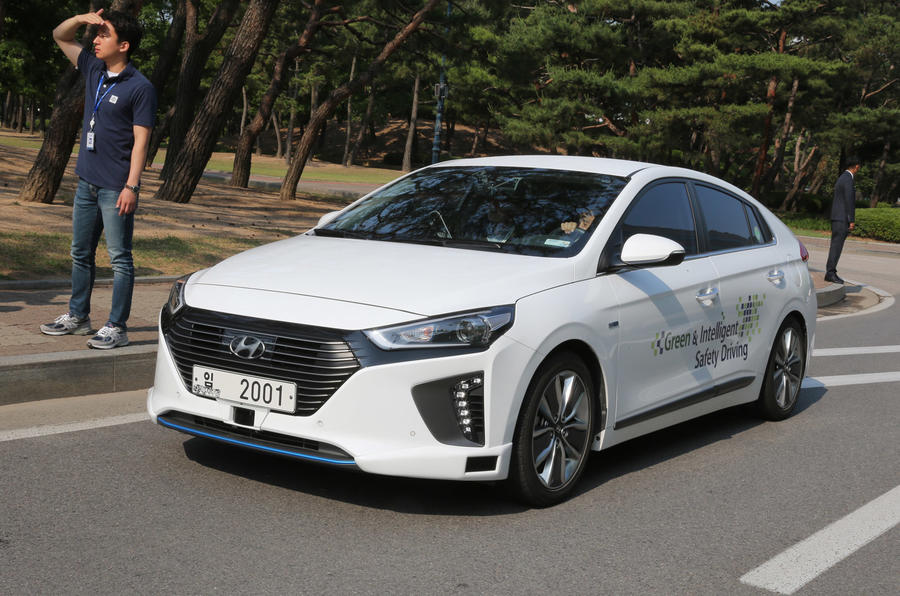 The technology in the autonomous Ioniq

The only sign that this Ioniq hybrid was different from any other was the monitor fixed to the passenger side of the dashboard, which displayed a ‘virtual view’ of the road, as perceived by the car’s on-board computer.

While the autonomous Ioniq was first shown to the public at last year’s Los Angeles Motor Show, Hyundai has been developing the system since 2010. Unlike some other car companies, which have partnered with specialist IT firms, most of the software that powers the Ioniq’s artificial intelligence has been developed in house. The software developer sitting behind the wheel for our test outing reckoned 90% of the code is Hyundai’s own.

That developer declined to say how many sensors were fitted to the car, or their exact arrangement. The first version Hyundai tested used seven sensors – three Radar, three LiDAR and one camera - and the new system has 'several more'. The firm previously revealed that the system had been designed to utilise sensors already on the car for systems such as cruise control in order to keep costs down. 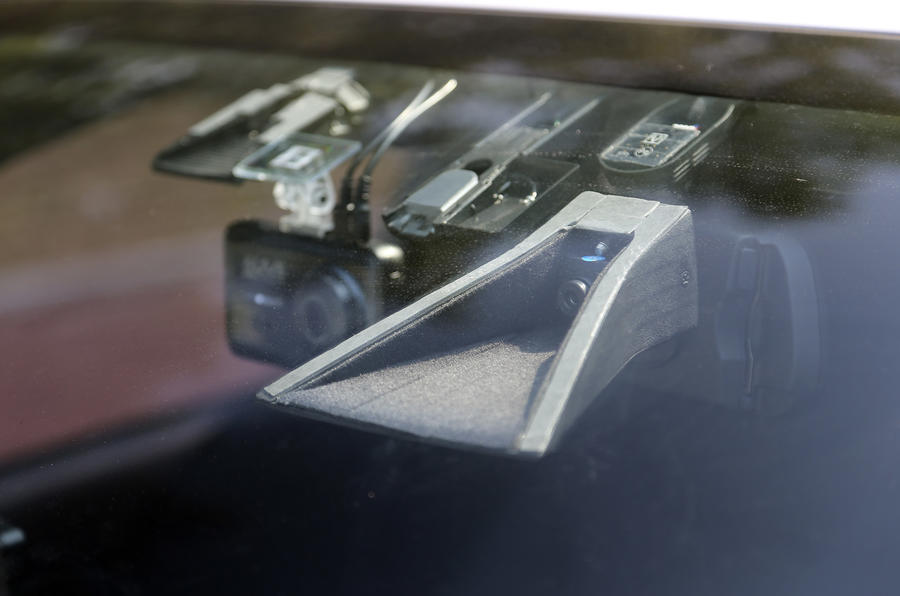 The system we were driven by can currently achieve level three autonomy, which means the vehicle takes on ‘safety critical’ functions, although a driver for certain conditions, and to intervene if necessary. Hyundai are already working on a system featuring level four autonomy.

Hyundai reckon the system is currently effective in rain, but struggled to cope with snow – because it covered up the lane markings used for guidance. As well as extensive running around the Hyundai R&D Centre’s roads and test tracks, the Ioniq hybrid has been tested extensively on open roads near Namyang, at speeds of up to 120km/h.

How well does the Ioniq hybrid drive?

The short, pre-programmed test route we experienced didn’t give the autonomous Ioniq the chance to reach 120km/h – the speed limit never topped 40km/h. But the route did take in one of the busiest stretches, leading to the site’s main entrance. As well as navigating the course, the system had to cope with obstacles including other traffic (a surreal mix of banged-up Korean delivery vans, coaches and myriad camoflagued Hyundai, Kia and Genesis test machines), speed bumps and pedestrians.

The system is engaged by pressing the ‘cruise’ button on the steering wheel – pressing it again hands control back to the driver. And it felt assured and safe at all times. 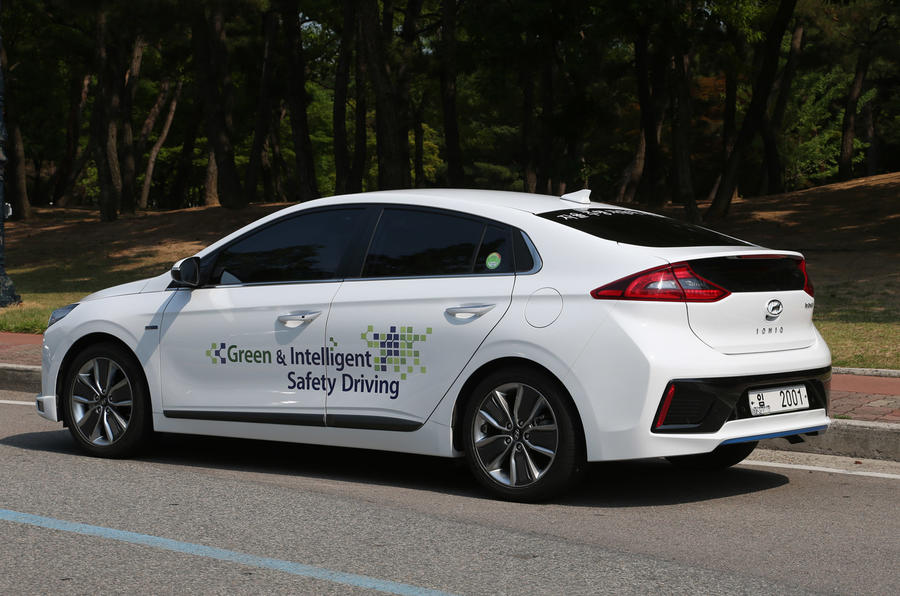 Early in the route, a small group of pedestrians began to cross the road as the Ioniq approached. On the information screen you could see the system process as potential hazards, flashing red as they walked into the Ioniq’s intended path. That caused the car to slow - but when the pedestrians stopped, the Ioniq was quick to realise they’d done so, and that the path was clear to proceed.

The only other point where progress felt anything less than sure-footed was at mid-point of the journey, which utilised a turning circle in a car park at the security point just past the R&D Centre’s main gate. A bus parked on the outside of the turning circle clearly didn’t help, and the Ioniq’s progress around the bend was a touch on the ginger side.

When it came to turning at junction or changing lanes, the system indicated well ahead of time and then made clear, clean moves. When another car passed it on the two-lane road, the Ioniq had a very brief wobble, but remained firmly between the lines.

Also impressive was how well it handled the multiple speed bumps on the route, using a combination of radar and GPS map data to calculate the height and severity of each speed bump, braking to an appropriate speed to take the bump as smoothly as could be allowed. 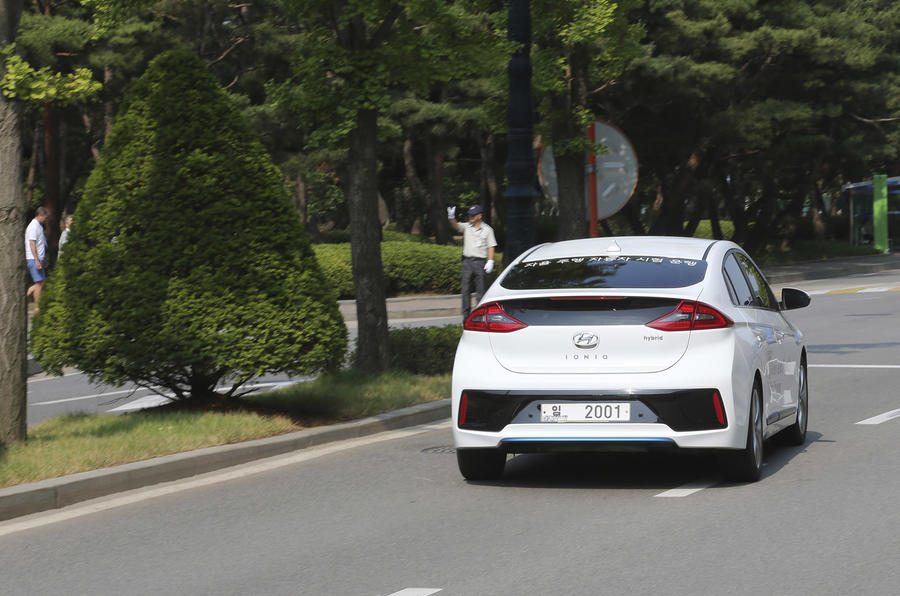 When will the autonomous Ioniq be available?

There’s no official launch date yet, but Hyundai is hoping the system will be available by 2021. So far the system has only been tested in Korea, and in relatively rural areas – our guide for the trip noted it had yet to be tested in a major urban environment such as Seoul.

But it’s clear that Hyundai’s autonomous technology is certainly at a similar level of development to systems demonstrated by rival firms. 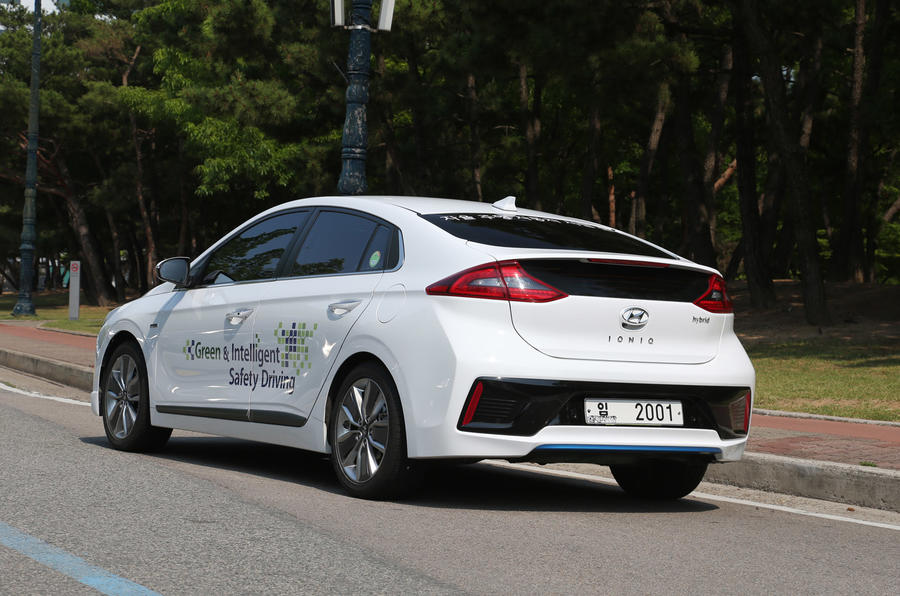