Not the camouflage-livery or covered-up bumper type of prototype, but the sort that isn’t quite the finished product, and is still being fine-tuned for the firm’s domestic South Korean market, let alone the British one.

Like most crossovers in its class, the Kona is aimed squarely at the ‘urban’ family market, albeit with styling that plays to the off-road origins of the category and available with four-wheel-drive.

Our test car had a 174bhp 1.6-litre turbocharged petrol engine - the higher-powered of the two petrols that will be available at launch in the UK - four-wheel drive and a seven-speed DCT automatic gearbox.

The other engine is a 118bhp 1.0-litre, which will come with two-wheel-drive and a six-speed manual. A 1.6-litre diesel engine is on its way to Europe in 2018, although it’s still not comfirmed if it will come to the UK. 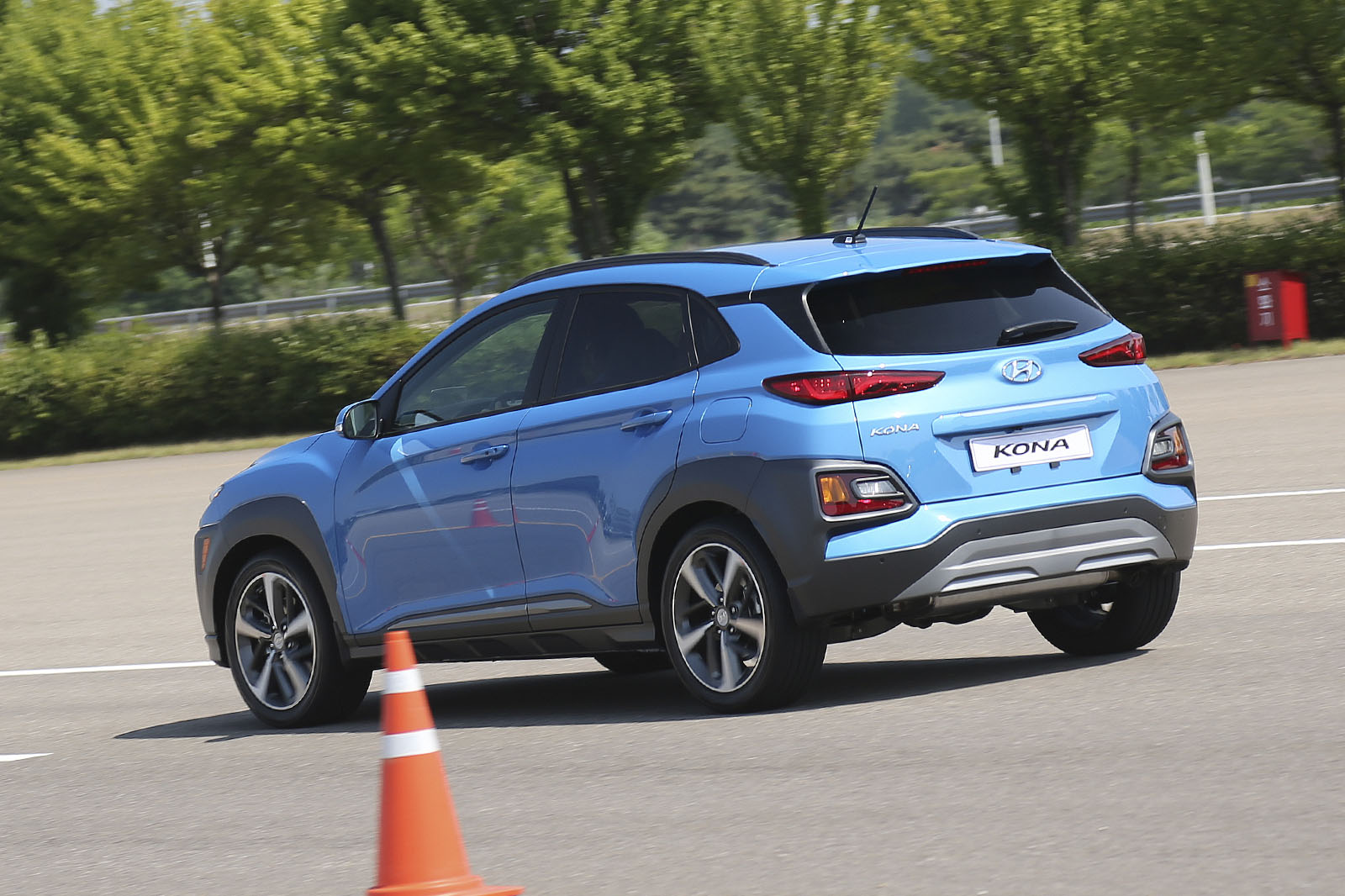 The Kona was conceived as a global car, with the ride and suspension – focused primarily on comfort and agility – to be adapted for each market. We tested a car with South Korean-spec suspension, which is focused on a ‘nimble’ ride, according to Hyundai engineers. European cars will be set for ‘fun’, apparently, with the focus on agility through adjustments to the steering and rear suspension.

The Kona is lower and wider than the Juke, and a decent size for a small family SUV. It has a slightly lower floor than is usual this class in order for more interior space, but it still offers that ever-popular high-riding SUV driving experience.

Hyundai says it designed the car to be ‘progressive’ and ‘powerful’. It might not be quite to everyone’s tastes, but it certainly has a confident expression, and arguably looks better in the metal – and especially in certain colours – than in photos.

We sampled the Kona on a relatively short test loop at Hyundai’s Namyang R&D Center in South Korea. The course starts with a long up-and-back straight-line section, before moving onto a bumpy, winding handling course designed to simulate various surfaces and road types.

Initial acceleration is good, although the automatic 'box wanted a bit more urgency going up through the gears, with a resulting amount of excess engine revving. But once up to speed, the engine is smooth, quiet and compliant. 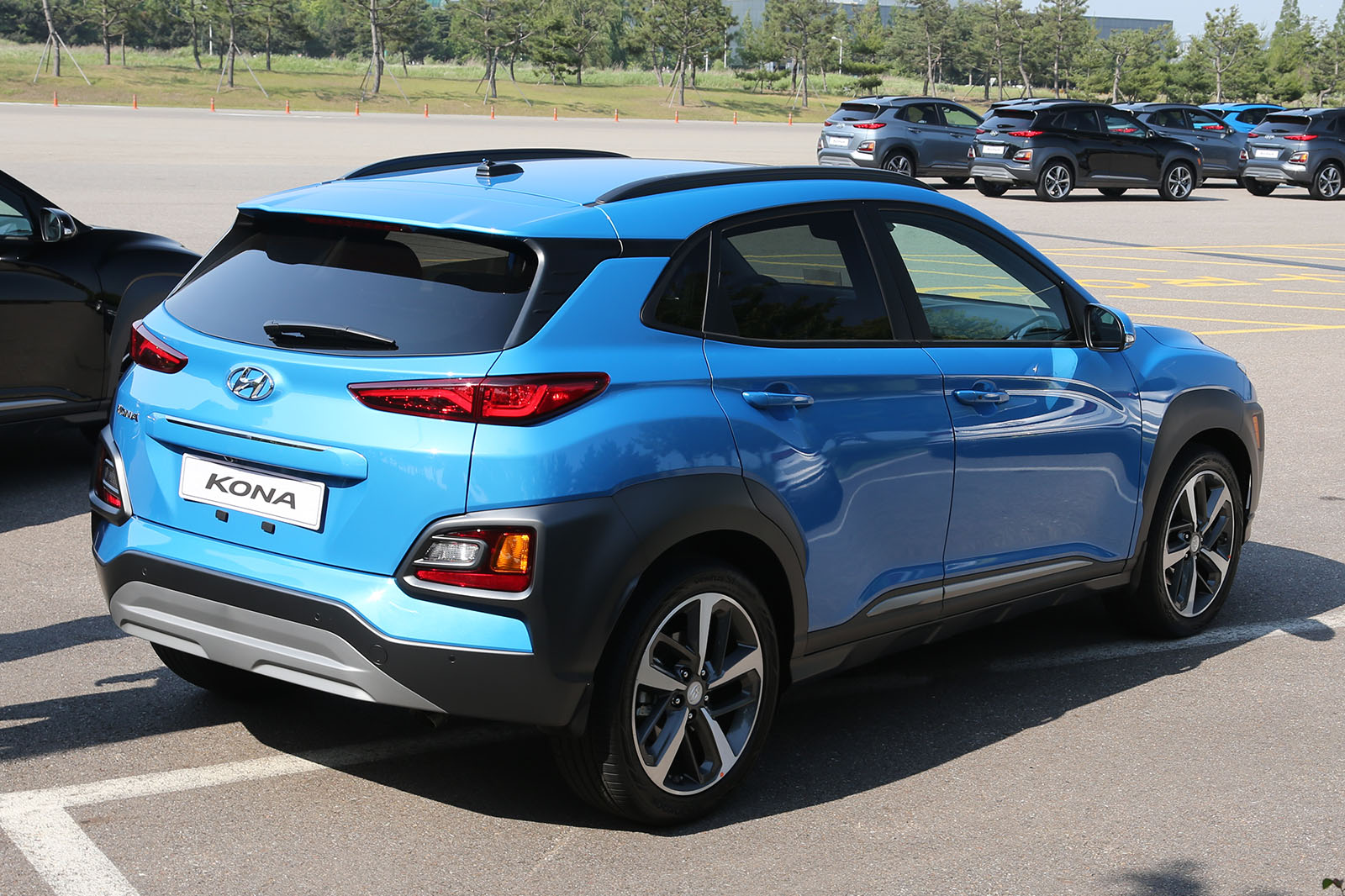 Of course, straight-line acceleration is unlikely to be a priority of Kona buyers: ride, handling and manoeuvrability, particularly on bumpy urban roads, certainly will be. On such surfaces, the Kona soaks up the bumps and dips well. It's occasionally a touch wobbly, although nothing more than you’d expect from a high-riding crossover, and it rarely feels unsettled.

The steering is light and easy, although it doesn't exactly offer the most involved feedback. Perhaps that’s something that will be dialled up when the ‘fun’ is put in for the European market.

The DCT transmission features two drive modes: Comfort and Sport. The latter mode holds the gears for longer, producing more revs but without much discernable improvement in performance – although on such a short test run it was impossible to perform a wholly accurate back-to-back of the two modes.

Generally, the Kona's ride is quiet and certainly comfortable; it was instantly reassuring.

The driving position is good, with decent all-round visibility. If anything, the plain interior is slightly disappointing, given the car’s bold external appearance, but the clutter-free controls and dials are easy to navigate, and it feels comfortable and spacious.

Passenger space is pretty decent, too; the Hyundai engineer sitting next to me offering implacably polite directions seemed comfortable enough. 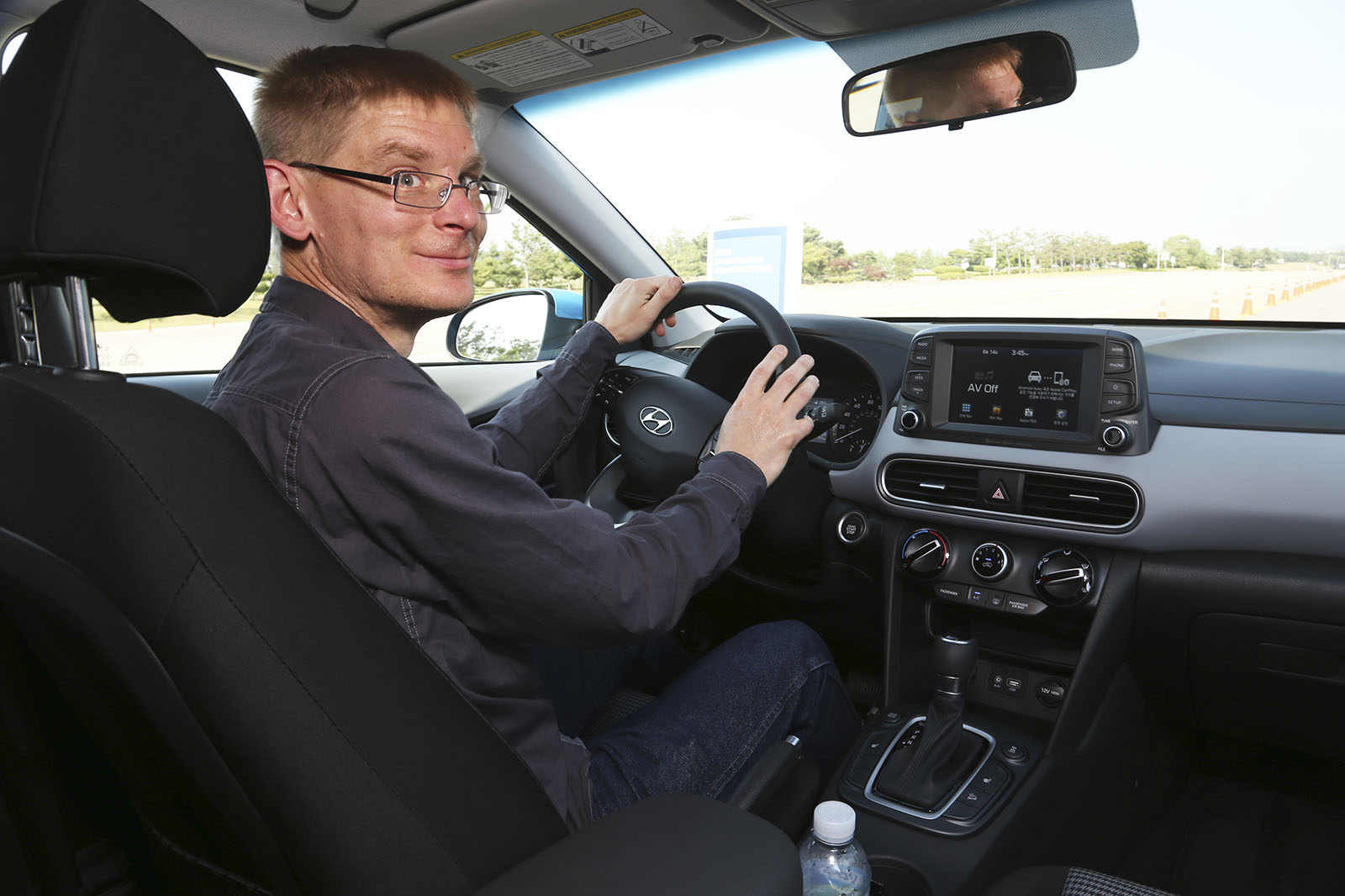 Honestly, it's an impossible question to answer after a short lap of a test track in a Korean-spec prototype - and that's why you won't find a star rating on this drive.

For one thing, this is a car designed largely for urban markets, and no matter how many lumps and bumps are bashed into it, Hyundai’s test track is barely representative of the streets of Seoul, let alone Stockport. We’ll wait until we've driven it on proper roads before offering any verdicts or star ratings.

But the signs are encouraging that Hyundai's first foray into this SUV segment could well be a contender. It ticks a lot of boxes for its intended audience; while it's no performance car, it does have a responsive and confident ride.

Much will depend on exactly how the Kona’s ride and handling is adjusted for the European market – and on the performance of the 1.0-litre turbocharged manual version. If, as suggested, Hyundai sells that entry-level model for around £15,000, it should be high up in its class.

Yet another shitty jeep

It's as if there's a contest for who can make the ugliest one. Even manufacturers who make decent cars can't seem to prevent themselves from breaking off from their car duties to foist ever more awful jeeps onto the world. They resemble a plague, clogging the roads like infected cells in the bloodstream. I look forward to the day when people see sense and return to driving cars.
androo 15 June 2017

That is one ugly motor

That is one ugly motor vehicle! might look OK in black to disguise all that plastic cladding...?
giulivo 15 June 2017

Better more than less if it's going to be used in the city; spaees me the effort, cost and ugliness of aftermarket rub strips.
289 16 June 2017

.....It certainly is...'pug ugly', but then I have come to expect this from the Asian designed so called 'crossovers'.
Honestly, despite being a SUV driver for 30 years, the constant barrage of small crossovers has become like 'white noise' to me and I neither bother to care or read about them. I certainly couldn't tell one from another on the road other than that Toyota which looks like it has been designed by someone on a acid trip!
View all comments (6)