From £21,0566
Hyundai’s take on the plug-in hybrid hatchback is a touch worthy and lacks polish to drive, but should deliver on everyday fuel efficiency
Open gallery
Close

Hyundai has high hopes for the plug-in hybrid (PHEV) version of its Hyundai Ioniq hatchback, not least because the car you could consider its warm-up act, the cheaper Hyundai Ioniq hybrid, had rattled through Hyundai UK’s annual volume allocation for this year before the end of February.

The PHEV version of the Ioniq will be more expensive than the hybrid, of course (its exact UK price is still to be confirmed) and its real-world fuel economy will depend a great deal upon how it’s used (as is true of all plug-in hybrids). But if you’re reading this for one reason and one reason only, I expect it’s this one: “257mpg”. Such remarkable fuel economy could only come from a really outstanding car, surely?

The third Hyundai Ioniq derivative (there's a fully electric one, too) is ostensibly the same as the lesser hybrid, but for a much larger and more powerful lithium ion drive battery and the Type II electrical charging socket needed to charge it from the mains. The battery’s capacity is 8.9kWh; more by a shade than those of the Toyota Prius Plug-in and Audi A3 etron - and not by coincidence, you suspect.

The bigger battery’s higher voltage also allows the Ioniq’s 60bhp electric drive motor to draw more torque from it more of the time than it can in the hybrid. So while the Plug-in is the heavier of the two, and Hyundai claims identical peak system power and torque outputs for both cars, it’s the Plug-in that’s marginally the more accelerative.

The Ioniq Plug-in charges from a typical 16-amp driveway wallbox charger in a little over two hours. Petrol power comes from a 104bhp 1.6-litre petrol engine running on the Atkinson combustion cycle, and electrical and piston power are juggled onto the road through the front wheels via a six-speed dual-clutch automatic gearbox. 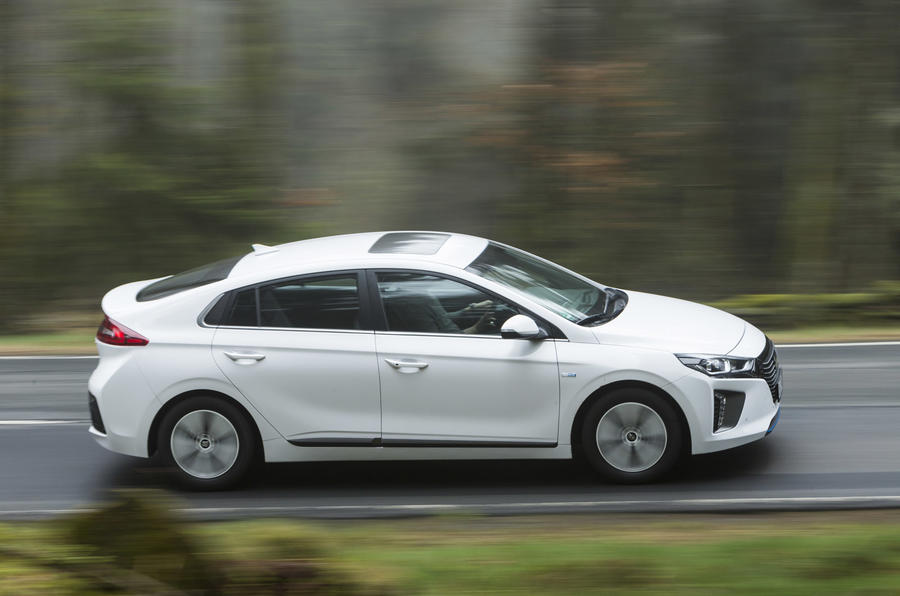 Like its rangemates, the Ioniq Plug-in is a fairly plain and unexciting car to drive. To be fair, it isn’t designed to match the emergent PHEV market's sportier options either on performance or dynamism, but to bring PHEV technology to a wider audience at a cheaper pricetag than it’s been available at thus far. But even after you’ve tempered your expectations, the Hyundai seems frugal and functional but worthy, and much of its driving experience wanting for a good standard of finish.

The car can be driven in EV, HEV Hybrid and Sport modes, and truncated testing suggested it should be good for around 30 miles of mixed driving on battery power alone: not quite equal to Hyundai’s 39-mile claim, but certainly up there with the Toyota on electric-only range and much better than most PHEVs. Over a total 100 miles of testing at mixed pace, we averaged 85.6mpg in the car overall: also a very creditable result.

The Ioniq’s 60bhp electric motor feels potent enough around town and up to about 50mph. The car is happy to cruise on electric power at motorway speed, but you need to rouse the combustion engine for meaningful acceleration here. It’s also a frustration that Hyundai doesn’t make it easier to drive up to the limits of electric power and keep the piston engine off via a haptic accelerator pedal or similar, even in EV mode. 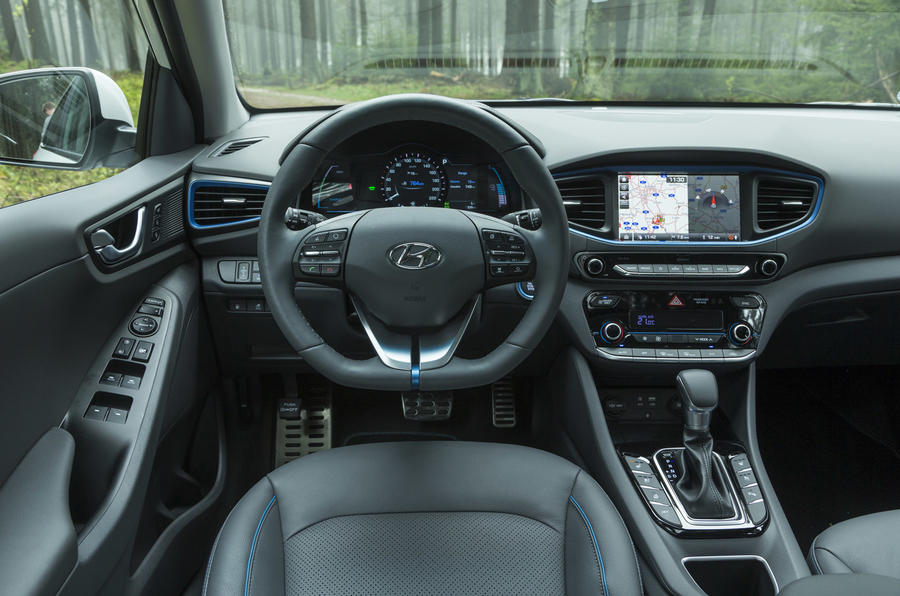 Select Sport mode and an attempt is made to go beyond the kind of driving involvement you get from a typical economy car, but it’s a ham-fisted one. The car’s steering becomes leaden and cumbersome, the gearbox struggles to deliver peak performance with decent responsiveness, the wooden ride becomes crashy and the car’s increasingly precarious grip only announces itself in clearer terms.

But stick to HEV Hybrid mode once your electric range is depleted and the car's easier to drive and feels more coherent. There's very little connected feel from the steering and the usual artificial feel to the brake pedal which makes executing smooth stops trickier than it needs to be, but, so long as you're interested most in how little you're putting in the petrol tank, none of that need necessarily offend too much. 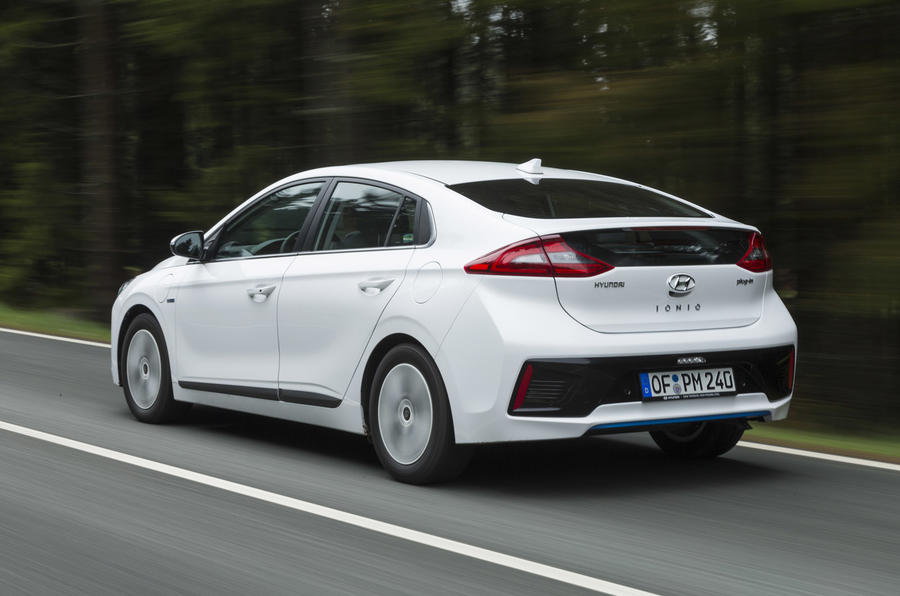 Certainly not because you think this is a cut-price Volkswagen Golf GTE, plainly.

But as a fairly one-dimensional hatchback bought to save on fuel costs and to serve as fairly practical and pleasant family transport, the Ioniq Plug-in deserves a healthy nod of respect. Depending on how keen Hyundai's UK showroom price for the car turns out to be, it may even deserve more than a healthy nod.

Looks like a really good car. Transport.
Last year I arrived at Kings Cross , needed to drive to Cornwall so I hired a car, it was a Hyundai I3 automatic ( i never drive autos) , it went from A to B and back to A, without any drama. It's a car , a means of transport.
The Ioniq PHEV looks like a very good car, a means of family transport.
Autocar needs a major reset, the UK is too small with too many cars for playing in cars. In the early 1980s I drove from Brighton to London Bridge in 45 minutes, in a Porsche 911S, you just can't drive like that any more so forget it, tune in the Mozart on a good hi-fi and relax until you arrive at your destination.
LP in Brighton 17 May 2017

Agreed, energy consumption should be measured in kilowatt hours

Given that a significant part of the EU test is completed by electric power only, then energy consumption should be quoted in miles or kilometers per kWh, not mpg. This way, the combined energy of the fuel and electrical energy is considered, not just the former. And it would enable a plug in hybrid to be directly compared with either a pure electric car or a petrol or diesel one. (Actually petrol and diesel cars would fare pretty badly with energy contents of 9.4 kWh and 11.1kWh per litre respectively of the two fuels!)
max1e6 16 May 2017

We want real reviews with real tests of the vehicle's fuel economy in different situation.

Your review is completely inadequate for a potential buyer of this model.