BACK TO ALL NEWS
Currently reading: Subaru STI E-RA is 1073bhp electric track weapon
UP NEXT
Hope for Bloodhound LSR project as sponsor talks start again

Revealed at the Tokyo Auto Salon, the track-bound concept forms part of the STI E-RA Challenge Project, which Subaru has initiated with the aim of "gaining experience and training of new technologies in the world of motorsports in this carbon-neutral era focused on combating global warming".

Like the brand's debut production EV, the Solterra, the STI E-RA is claimed to draw on Subaru's "all-wheel control legacy", which it established over two decades of competing in global rally championships with the Legacy and Impreza.

The concept aims to promote what Subaru says are its cars' defining traits, namely the "pleasure of driving" and an "absolute sense of security" on the road. An STI-badged version of the Solterra shown alongside the concept, with a new rear spoiler, bodykit and red exterior accents, hints that the moniker could be used for performance-inspired road cars, too. 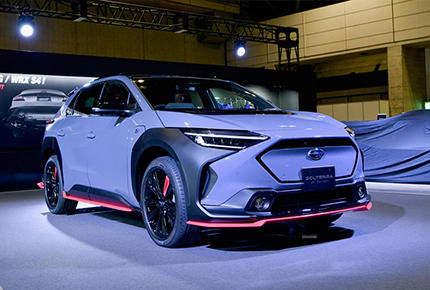 It uses a total of four motors – one on each wheel – and has a combined output of 1073bhp, exactly matching the similarly conceived Mission R concept Porsche revealed last year.

The output of each of the "high-torque" motors, supplied by Yamaha, can be altered instantly as required, courtesy of an advanced torque vectoring system tuned specifically with a focus on driving pleasure.

Subaru chose to mount a motor on each wheel to allow for optimal power delivery and improved yaw control, but also because such a set-up is permitted by the FIA's regulations for the new E-GT race series, which will get under way in 2023 - suggesting a Subaru entry is on the cards.

Subaru says it will compete in motorsport as part of a move to improve the driving characteristics of its road cars and to prepare for a "future electrified society".

Following an on-track development programme over the course of 2022, Subaru will take the STI E-RA to the Nürburgring, where it will attempt to achieve a 6min 40sec lap time.