BACK TO ALL NEWS
Currently reading: GMC Hummer EV to be revealed tonight
UP NEXT
Agents of change: how car buying is changing

The new GMC Hummer EV, the first in a line of premium electric SUVs and pick-up trucks to use the revived badge, will be revealed tonight (Tuesday).

American automotive giant General Motors (GM) confirmed earlier this year that it planned to unveil the reinvented Hummer at an event in May, but it delayed the event until now due to the coronavirus pandemic.

The Tesla Cybertruck rival will be revealed in an online launch event, along with television adverts that will be screened during coverage of the Baseball World Series and talent show The Voice.

Ahead of the reveal, Hummer has teased the EV's new 'crab mode', which utilises four-wheel steering to allow it to travel in a diagonal direction. Hummer says the function is "tailor-made for off-roading customers".

The Hummer EV is referred to as "the world's first super-truck". With around 1000bhp and 11,500lb ft of torque, it's claimed to be capable of 0-60mph in 3.0sec and takes its power from GM's new Ultium battery pack, which is capable of "super-fast charging" and expected to offer a range of up to 400 miles.

Previous information released confirmed that the truck will feature a so-called infinity roof with removable glass panels to offer a open-air driving experience, while the design of the platform-sharing SUV variant looks to be modelled heavily on the iconic Hummer H2, which went out of production in 2009.

The EV will also feature an Adrenaline mode, which can be expected to offer similar performance-enhancing functionality to Tesla's Ludicrous mode.

The new model will be built at GM's Detroit-Hamtramck factory in Michigan, US. 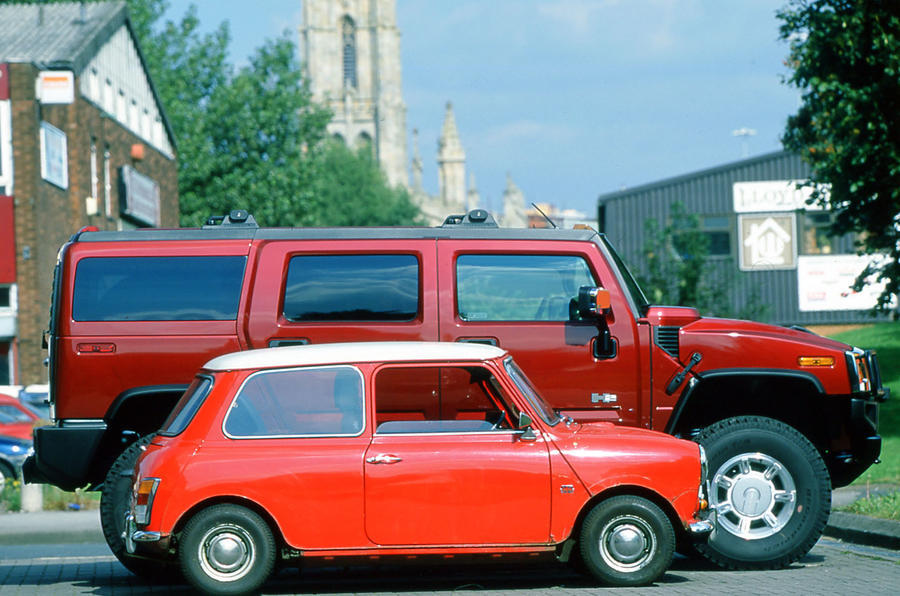 The large EVs will sit atop a new skateboard-style chassis, similar to that of American start-up company Rivian, which combines motors and batteries for cheaper production costs. Around 80,000 units per year are expected to be produced.

Regarding GM’s choice to develop premium EVs before more affordable models, Auto Forecast Solutions’ Sam Fiorani told Reuters: “It makes perfect sense to hit the high end of the market in order to generate some revenue that might actually turn a profit.”

Such a move, Fiorani noted, has proved lucrative for Tesla, which launched with the low-volume Roadster before going on to rival BMW and Mercedes-Benz with the Model S.

Production of Hummer's iconic H2 and smaller H3 ended in 2009, as GM eyed a return to profit following a high-profile bankruptcy announcement.

The new Hummer electric pick-up is likely to be priced to compete with the forthcoming Rivian R1T and could beat Tesla’s long-awaited Cybertruck to market.

As Royce found out you add batteries to a behemoth, you cannot drive it with a normal UK/European driving license.
TStag 20 October 2020

I do wonder why Range Rover

I do wonder why Range Rover and others don't make an all electric model with similar range, etc. The fact they don't makes me think the either can't do it economically yet or it won't be a very good car. Happy to be proved wrong but it doesn't add up to me.

Anywhere, any time one wants, because one feels like it.