Hardcore off-road modifications give the electric SUV go-anywhere prowess. We get behind the wheel
Open gallery
Close

Mercedes-Benz has revealed the latest in its growing line of hardcore four-wheel-drive prototypes, the EQC 4x4² - a one-off conceived to explore the ultimate off-road capability of the German car maker’s first dedicated electric model, the Mercedes EQC.

The fully operational EQC 4x4² is based on the EQC 400 4Matic, complete with a twin-motor electric drive system developing 408bhp and 562lb ft of torque.

Together with its added off-road focus, it is claimed to preview the sort of engineering details that Mercedes is considering for upcoming models from its newly announced G sub-brand, which is modelled on the operations of AMG and Maybach. The G sub-brand will produce a new series of models – including a pure-electric version of the G-Class – aimed at buyers seeking extreme off-road performance.

The high-riding electric SUV prototype was created by a small team headed by Jürgen Eberle, a Mercedes-Benz development engineer who also played a key role in the earlier G500 4x4², which reached limited production after its unveiling in 2015, and the E-Class All Terrain 4x4².

Eberle said: “Despite the trend towards electric vehicles right now, there remains great enthusiasm for traditional off-roaders. Our aim was to combine these two with a car that provides the best of both worlds – fully electric but with the ability to go off road in a serious way.” 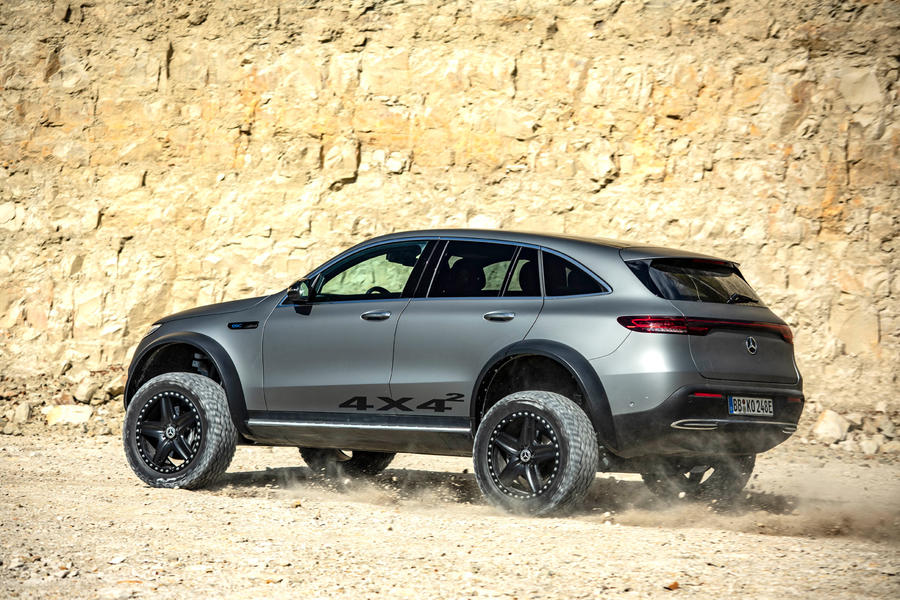 To provide the EQC 4x4² with the ability to take it well away from the bitumen, it receives heavily reworked suspension with multi-link portal axles that serve to site the wheels much lower than the axle hubs for vastly increased ground clearance. A similar process was undertaken with the G500 4x4² and E400 All Terrain 4x4². Further modifications include increased track widths and 20in wheels from the old R-Class shod with 285/50-profile Cooper Zeon tyres.

Together, they have necessitated the fitment of new plastic wheel-arch extensions to keep it compliant with Germany’s vehicle registration process. They not only to increase the overall width of the standard EQC  by a full 200mm but also provide it with a toughened appearance fully befitting its off-road brief.

Eberle said the ground clearance has increased by 153mm over the standard EQC, at 293mm, which gives Mercedes-Benz’s latest four-wheel-drive prototype 58mm more clearance than the standard Mercedes G-Class. 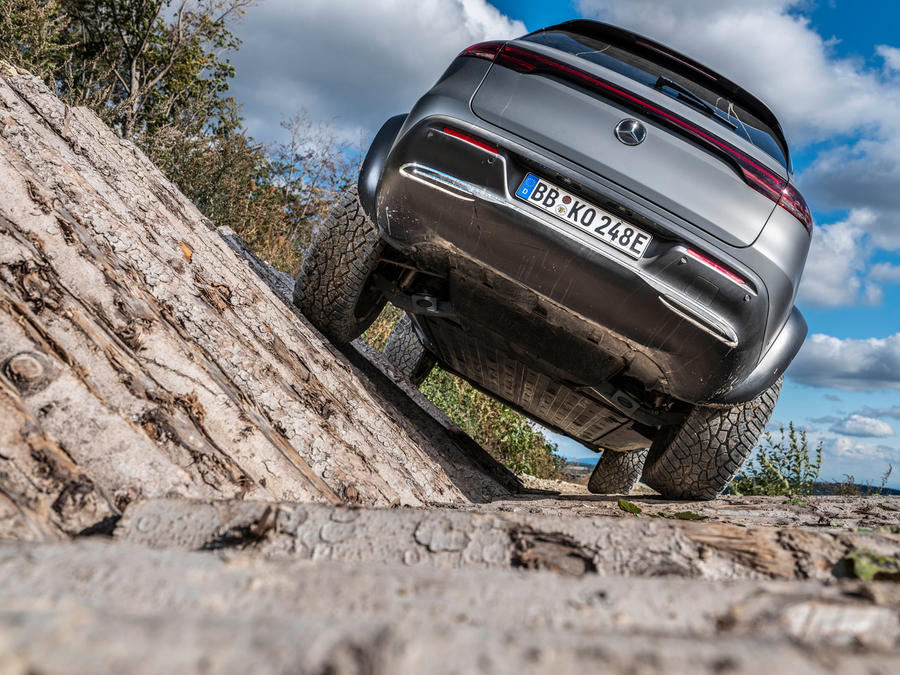 Our test of the EQ 4x4² took place in a large quarry that had been turned into an off-road park with deep sand, water crossings, muddy patches, rocky tracks, steep inclines, treacherous declines and side slopes, among other obstacles. It’s hardly the place you’d expect to see a leather-lined EV. But that in itself is part and parcel of this car's appeal.

Climbing up into the new prototype is quite a stretch, but once you’ve reached the elevated driver’s seat, it’s all fairly familiar and every bit as well finished as the standard EQC.

It’s a strange feeling being perched well above the ground, but the view is quite commanding in the same way that it is in Mercedes-Benz’s other portal-axle creations, although you can’t see the corners very well.

We move off in complete silence but the sound of gravel beneath the tyres quickly replaces it. The strong torque delivered by the twin electric motors provides convincing propulsion in all situations. Despite the rugged and sometimes treacherous conditions, it feels strong and powerful. 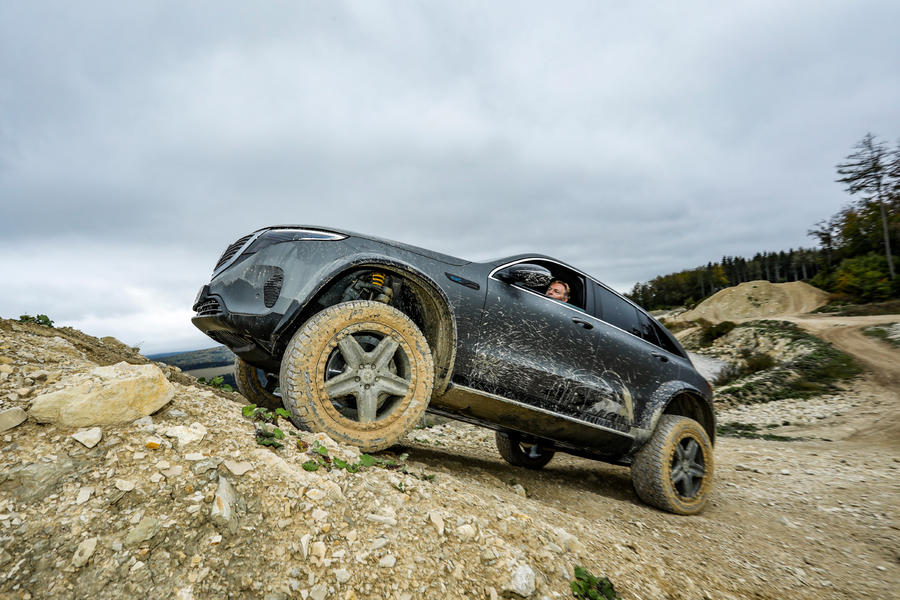 All up, there are seven driving modes, although we concentrated mostly on the most extreme of them: Off-Road Plus. Eberle and his team have altered the throttle mapping of the standard EQC and it allows suitably sensitive modulation where the traction is questionable and you need to creep along at little more than walking speeds.

The portal axles don’t feature reduction gears, so you cannot choose low-range gearing. However, the fixed-ratio gearbox provides exceptional smoothness, even at very low speeds when climbing. The steering is light in weighting but as precise as any off-roader I’ve driven, while the brakes offer a reassuring feel despite the large wheels and tyres.

One key advantage over conventional combustion-engined off-roaders is the tight turning circle, which gives the EQC 4x4² outstanding agility and a terrific sense of manoeuvrability. Wheel articulation is also very impressive – and there’s no rubbing of the tyres within the guards even when an individual spring is fully compressed.

You don't get locking differentials like you do in the G-Class. Still, the brake-actuated ESP system is quick and sensitive enough to provide outstanding traction and sure-footedness. With all that ground clearance, it proved unstoppable on my test drive, even on the most demanding obstacles. I tried hard to place it in a situation where it might get stuck, but with some patience behind the wheel, the high-riding prototype always managed to get itself out of trouble. 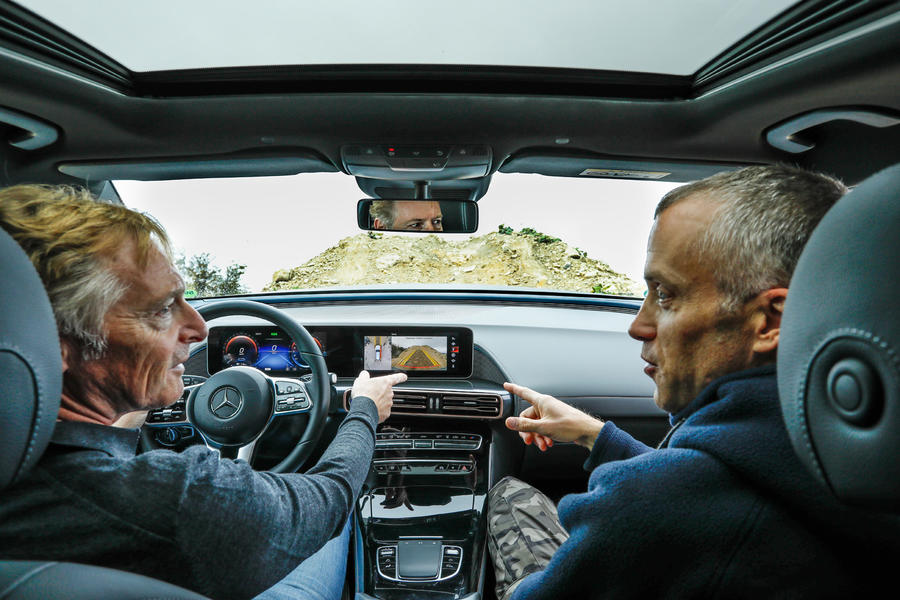 Mercedes-Benz is not making any claims about the weight of the EQC 4x4². But with the EQC hitting the scales at 2495kg, it’s obviously quite exceptional, even by portal-axle off-roader standards.

And then there’s the question of range. Again, there’s nothing official, but with the standard model offering a claimed 259 miles, you won’t want to head too far off the beaten track. At least, not unless you are towing a spare battery to top up the energy reserves when they run low.

Apply less current and you will have less torque.

But yes, they will definitely need a 'snow' mode in EVs.

It just looks odd, only done for the EV cudos, this'll never get made as is.

No low range gears = no problem

Presumably since max torque is available from zero revs with an electric motor, no off-roader thus powered would need a low range box.

I have been thinking about this too, and have come to the conclusion that without a low range box, the massive torque would actually overcome grip and spin wheels (particularly in snow or mud) .....not whats needed, so unless there is some way to effectively control the instant grunt something will be needed.

What aboiut downhill retardation.....do you rely on an electric motors ability to hold the car on a slope?

I guess its all irrelevant though as few actually use their vehicles off road.