It's not quite the last Huracán’s last hurrah - there's one more variant still to be unveiled - but the Tecnica feels like the equivalent of a greatest hits compilation for Lamborghini's long-lived junior supercar.

It will have more power and sharper dynamics than the Huracán Evo RWD that sits below it in the pecking order, but with more accessible pricing and everyday usability than the track-focused STO above it.

You can read our more detailed reveal story about the Lamborghini Huracán Tecnica - and look at some prettier pictures - but Autocar has already had the chance to experience a prototype version at the Nardò track in Italy.

Changes pretty much split the difference between the existing models. The Tecnica gets the STO’s brawnier, 631hp version of the 5.2-litre naturally aspirated V10 and drive is sent exclusively to the rear wheels through a seven-speed dual-clutch transmission. It gets fixed-ratio steering instead of a variable rack, which, the company admits, is better suited to track use, but it also has active rear steering to both improve stability and to allow the advanced LDVI active dynamics system to adjust the car’s attitude under hard use. The adaptive suspension, torque biasing rear differential and traction control system have all been recalibrated, too.

While less visually aggressive than the STO, the Tecnica has new front and rear bumpers that incorporate much bigger apertures than the Evo's, plus integrated winglet elements up front. It also has a new vertical rear screen that looks across a carbonfibre engine cover in place of the glass panel of lesser Huracáns. The new rear wing now sits raised from the bodywork and is more effective: Lamborghini claims it can generate 35% more aerodynamic downforce than the Evo, translating to a peak across the vehicle of around 180kg. Cooling for the standard carbon-ceramic brakes has been improved, too. 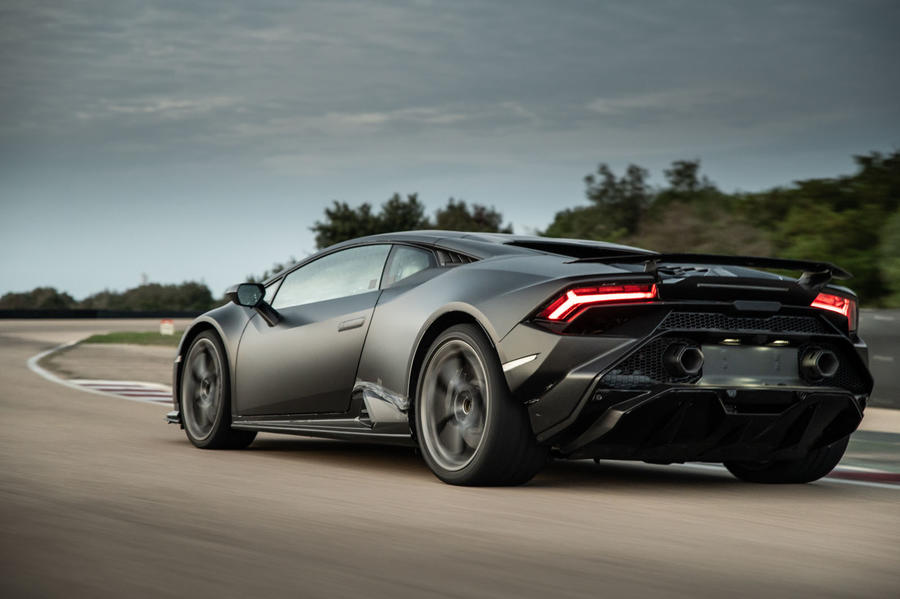 The high-speed handling circuit at Porsche’s Nardò test track is an entirely appropriate place to make acquaintance with a new Lamborghini for the first time. Much of the development work on the Tecnica has been done here. But it is also an unarguably intimidating one. The 3.8-mile circuit’s first corner is a hugely fast left-hander that leads straight into the braking zone for the much tighter Turn Two.

First impressions are that the Tecnica feels much more like an Evo-plus rather than an STO-minus. Although these things are relative, the V10 soundtrack is noticeably quieter than the savagery of the barely silenced track special, especially at lower revs. (Apparently, this is due in part to tighter EU drive-by regulations.) But the engine still needs to be worked hard to deliver its best and clearly enjoys being taken to its 8500rpm limiter - just 500rpm beyond the point where peak power arrives.

The throttle lacks the surgical sharpness of the STO - something that makes the more senior car hard to drive smoothly on road - but responses are still searingly quick. The Huracán’s turbocharged replacement will doubtless be faster overall, but it seems impossible that it could surpass the way this car responds to accelerator inputs.

The Tecnica’s steering is direct and delivers strong front-end bite although, as in other Huracáns, power assistance is still a little too generous for my tastes. Turn-in feels less scintillating than the STO’s, but the prototype’s optional track-biased Bridgestone Potenza Race tyres generate huge grip and the chassis balance is impressively adjustable. In the gentlest Strada dynamic setting, this means the ability to adjust the cornering line through weight transfer. Selecting the more permissive Sport mode brings a much more liberal threshold for traction control intervention, one that allows significant oversteer at lower speeds, although with tighter control as velocities rise. The punchiest Corsa setting permits much less slip, being intended to help deliver the quickest possible lap times.

While fixed-ratio steering gives consistent responses regardless of speed, I did find it necessary to build faith in the intervention of the LDVI system. The sensation of the active rear steering helping the car to rotate is a slightly odd one and initially led me to alter throttle and steering inputs in response, creating what was effectively a feedback loop as the prototype and I tried to adapt to each other. After an explanation of how LDVI works from Maurizio Reggiani - Lamborghini’s chief technical officer when I drove the car, but now head of motorsport - I learned to trust the active magic more. It is happiest when the car reaches an apex under braking and then to work around a gradually reduced steering angle and a consistent accelerator position.

While the Tecnica’s chassis coped well with Nardò’s bumps and and kerbs, these did reinforce a constant Huracán grumble: the lack of head room. Taking the handling track’s biggest crest at speed created the unmistakable sensation of the car briefly leaving the ground and my helmeted head reaching the roof. But the brakes felt good, with a heftier pedal weighting than in the other Huracáns I’ve experienced on track, and retardation staying impressively constant despite what must have been huge thermal loadings, especially those involved in shedding speed at the end of the handling circuit’s 0.6-mile main straight.

The Tecnica is well able to cope with life on track, but its road manners will be more important for those who are likely to buy it. The STO, hugely impressive on a circuit, feels harsh and loud (even by Lamborghini’s standards) on the road. The Tecnica might not be quite as fast or thrilling on a track - although it’s not far off - but it will cope much better with the real world. 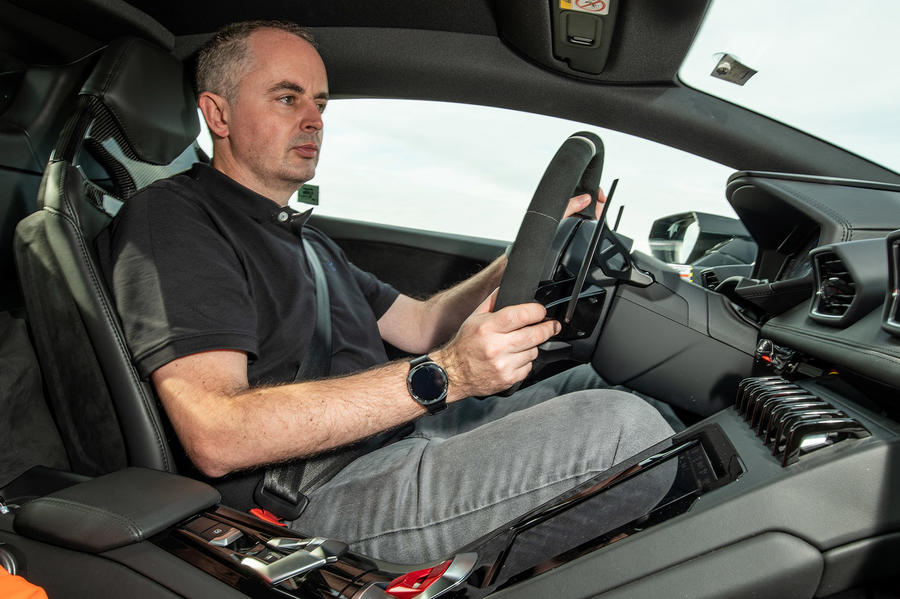 The Tecnica isn't the fast Huracán, or even the last Huracán, yet it may well be remembered as one of the best of the range. On the basis of a limited drive in a prototype, it feels like a step beyond the Evo RWD in terms of both performance and experience.

There won’t be many cars like this in Lamborghini’s hybridised future, and I suspect we’ll miss them sorely.

Interesting report thanks. Nice to see these cars still being built.  That rear steering combined with the fixed ratio steering would take some getting used to; a bit like the Renault Megane RS  rear steer maybe? I needed a track day to understand how it worked because it feels like the rear is coming round on you. I had an early Huracan for a journey and found that even for my slim 5;7 frame the seats were damm uncomfortable after half an hour, hopefully these are improved!