The current Peugeot 308, which is just fading out of production at Peugeot’s Sochaux plant in north-eastern France, will be remembered a reasonably balanced compromise between driving pleasure and rational purchase decision, coupled with handsome design and some genuine innovation.

Love it or hate it, Peugeot's I-Cockpit, first introduced in 2012, with its significantly smaller-than-usual steering wheel and instrument cluster above it, made for easy manoeuvring, a decent view out and easier entry and exit – with the not-insignificant downside being that you couldn’t always see the instruments.

The previous model was voted Car of the Year in 2014, which seems quite a long time ago given the new-generation Peugeot 308 doesn’t arrive until November. At the moment this new model is getting its final touches, so last week we took a pre-production car out for a first spin around its new home, the Mulhouse factory, located less than an hour from Sochaux.

The new 308 is set to be one of the main contenders in the conventional compact hatch segment, and will come with petrol or diesel power, or as a Peugeot 308 plug-in hybrid. It's the PHEV that tops the launch line-up with 222bhp combined, of which 178bhp is provided by the 1.6-litre four cylinder turbo petrol engine, and is the first time a PHEV has ever been available for this model.

The 308 is based on a different platform than the Peugeot 208 and Peugeot 2008 that both are available in a pure battery electric version. Of the two platforms Peugeot employs for its passenger cars, the 308 sits on the larger one. A purely battery-electric variant is being considered, but will probably not be available until 2023, like the mild hybrid version that is announced for the same year. “For the 308, the PHEV had our priority,” says brand product manager Agnès Tesson-Faget. 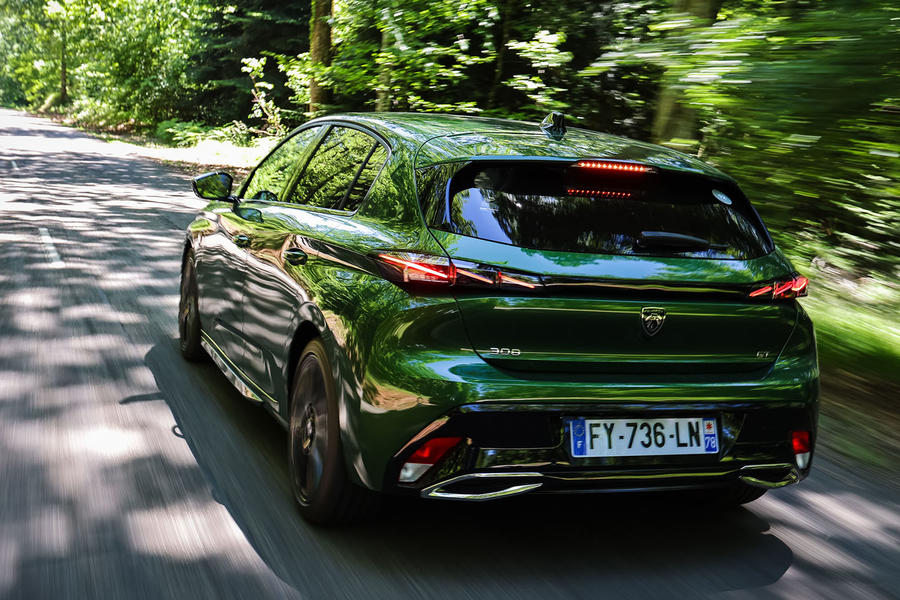 The new 308’s exterior features a long bonnet and a vertical nose that now gets Peugeot’s ‘sabre-toothed’ light signature, which, surrounded by plenty of black, looks quite aggressive. It’s also the first Peugeot to wear the new brand lion logo, a black and chrome buckler that resembles the shape of the Scuderia Ferrari badge.

Inside, it's quite a driver-oriented environment. Adults can fit in the back reasonably, but for families Peugeot has the SW version planned, and due in early 2022. As with the recent 2008, Peugeot has added a three-dimensional element to that controversial instrument cluster, with different layers of information and focal points. I found the gauges of the first I- cockpits were less playful and easier to read.

Dynamically, though, from the first roundabout the 308 makes it clear its character hasn't changed much, even if the significantly higher weight of the hybrid due to the combined petrol/electric gubbins, and a 12.4 kWh lithium-ion battery installed under the boot floor, is immediately noticeable. Comparing the figures it is at least 250 kilograms heavier than other 308s, depending on whether you refer to a petrol or diesel engine.

You do get the impression that the new 308 is more generously levelling out bumps and potholes than its predecessor mind: “We had some feedback from owners who wanted a bit more comfort so we put it slightly more in that direction,” says Marjorie Lhuillier, head of Customer Synthesis department, where Peugeot listens to clients and benchmarks competitors. 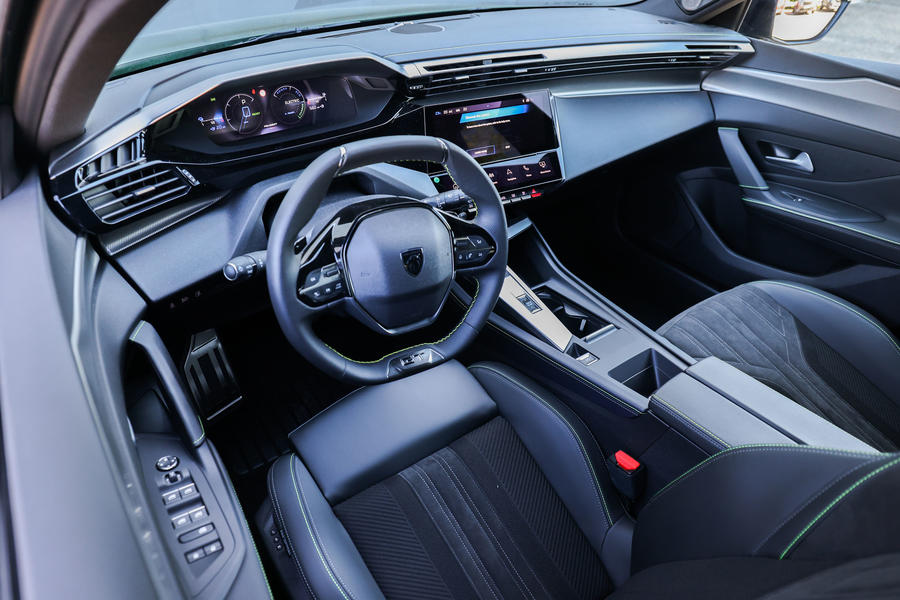 Still, the well balanced new 308 is fun to drive (our test car rode on its 18-inch wheels) and body roll is extremely well-contained. In fast bends, it behaves almost neutrally, while but in tighter turns is more prone to push onwards – the weight of the hybrid system won’t help.

The PHEV drivetrain, though, is particularly responsive. A slight movement of your right foot has it whip forward, plus it’s the quietest powertrain in the 308 line up. On pure electric drive alone, the range is a maximum of 37 miles. We’ll try finished cars in the Autumn.

It is a very striking car, inside and out. I really like it

@X1X3 I wonder if the seat is because it is a preproduction car?

Very nice indeed love the dash about time a car maker did not stick a ipad or kindle on the top the only thing I dont like is the different passenger seat odd that.

Its generally a handsome car but the front end and overhang looks massive, which spoils it. Also I wish Peugeot would have a word with their Citroen colleagues about ergonomics.