BACK TO ALL NEWS
Currently reading: First drive: 2021 Hyundai i30 Fastback N Performance prototype
UP NEXT
New Morgan Plus Four CX-T is rally-ready sports car

Minor revisions to the Hyundai i30 N take what’s already a very entertaining hot hatchback and improve it notably.

I enjoyed this car more some of my colleagues already. It really likes cornering and, when you turn-in, it has a genuine willingness to resist pushing-on and rotates seemingly around its middle, so it’s not all about desperate front tyre scrabble. Ford’s ST cars do the same and Renault Sport models used to, too, though alas not always so naturally now.

These revisions, tested in what’s still a prototype, leave that character unchanged, thankfully. Chiefly they bring the option of an eight-speed dual clutch transmission (DCT; previously manual only), an improved ride quality, forged wheels that save more than 14kg of unsprung mass, 15mm bigger front brake discs, minor drive assist, infotainment and seat upgrades, and an extra 5bhp, leaving the i30 N Performance a 276bhp car.

Some of the suspension changes were designed around the arrival of the DCT and the extra 60-70kg it brings. Front camber is more than doubled and DCT versions get different tuning for the electronically-controlled dampers than the lighter six-speed manual cars. 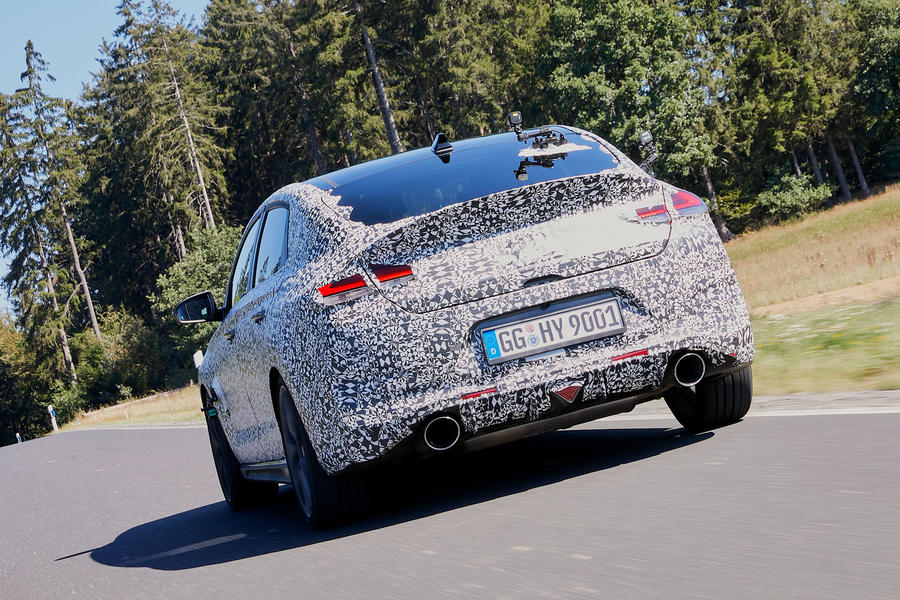 The DCT is a good ‘box, shifting smoothly and quickly and responsively up and down gears and it’ll cruise at around 1900rpm on the motorway. There are a few different drive modes, as there are for the steering, engine response, damper tuning, exhaust and more – honestly too bewildering for me but at least there’s now a cool spider chart on the 10.25in screen to make selecting options easier.

I’d rather N’s engineers gave us fewer and picked the ones they liked best, because there’s no doubt they’re really good at dynamic tuning. I tried the DCT in the longer Fastback model, which is a little more inert than a manual hatchback we also drove. Both ride with more ease than they did, but retain fine body control.

The DCT remains fun, too, despite the extra weight, but the manual hatch is still the better, purer, more nimble driver’s car. I’d have one over a Honda Civic Type R. It’s lower on outright power, and probably lap speed, than Honda or Renault alternatives, but lighten up, there’s more to life.

trash underwhelming overpriced car, how many spy shots aka paid pre release advertising to build up hype and customer awareness do hyundai/kia need?

I am sick of all of the spamming of mediocre korean cars on this site! There's four+ hyundai kia pr press release fluff pieces on the front page alone.

trash underwhelming overpriced car, how many spy shots aka paid pre release advertising to build up hype and customer awareness do hyundai/kia need?

I am sick of all of the spamming of mediocre korean cars on this site! There's four+ hyundai kia pr press release fluff pieces on the front page alone.