Crewe-based company is considering the design of its first ever electric production car, due by 2025
Share
Close
Share story

Bentley’s design team is already experimenting with styling for an electric car, due to be launched by 2025.

The Bentley EXP 100 GT concept unveiled last year was electric and now the company is considering how a production EV might look.

Bentley design director Stefan Sielaff said: “We are experimenting at the moment with an EV. My instinct is to create an EV which is a very modern step forward. It always has to be a Bentley, but the proportions of an EV will look different.

“If we look at the Taycan, it’s still a Porsche. If you look at Tesla, they don’t look deliberately dramatic. I admire, as a designer, BMW for doing the i3, but if you speak to customers, they say it looks ugly.”

He added: “We have to look at the bigger perspective and be brave. When it arrives at market, it has to be right. Bentley’s brand identity will be very helpful.”

Bentley boss Adrian Hallmark has previously said his company is “in a rush” to build an electric car but that the technology to do so won’t credibly exist until at least 2025. 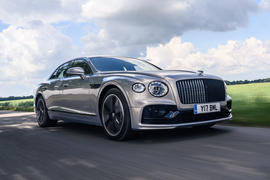 I don't know when Herr Hallmark said 2025, but they don't have to start from scratch. They have access to the VW/Porsche parts bin for the drivetrain, as they've done before. Perhaps they're worried about the die hard buyers, the ones who complained when the V8 was replaced by the W16. No doubt they'd implode at the thought of not being able to go brm brm and burning lots of hydrocarbons to do it.

As has already been stated, car development takes time. Even if they had a fully working prototype tomorrow, there would need to be months of testing, validation and design alterations. Even with a "parts bin" build, unless everything is in the same place, you need to reconfigure systems. You then have months of certification testing to make sure it can be sold across the world, which every brand has to do with every model for every market. Also, W16 in a Bentley? You're confusing a Continental with a Veyron .....

Bentley speak for if we launch a new model, looks like an Aston on steroids.

Really. Are you looking at the same picture

"To be launched by 2025"....fitting last words...Bentley is not serious obviously. Another vapor ware.

You do know how long it takes

You do know how long it takes to design, Research and test a car these days, used to be around eight years but is now daown to half that, so "BY 2025 for a company like Bentley is very very good., why do you have to be so negative, it gets very boring to go to every single report and within three posts there is usually someone putting the boot in - its boring and makes those that do it look very stupid.