BACK TO ALL NEWS
Currently reading: Comparison: BMW 420d Gran Coupe versus 330d saloon
UP NEXT
Stellantis exec: range and charging biggest barriers to EV adoption

The BMW 420d Gran Coupé has them queuing around the block, but is it as desirable as a fully loaded 330d saloon? We find out
Share
Open gallery
Close
Share story

Now must be a curious time to be selling BMWs if, as rumours suggest, the popularity of the evergreen BMW 3-series is suddenly under threat. Time will tell if that’s true, but it’s certainly what Autocar’s sources are beginning to hint at.

There’s no need for alarm bells, because the bedrock of a 50,000-unit sales phenomenon doesn’t just vanish overnight. But at certain points in the model range, the cracks are starting to appear. Higher-end Threes are evidently getting harder to sell.

A close friend of mine recently changed jobs, opted out of the new company car scheme, and went to his local BMW dealer to investigate financing his own new car. He wasn’t sure what he wanted, but fell quickly under the spell of the new four-door 4-series Gran Coupé.

Read our review on the BMW 4 Series Gran Coupe

He isn’t alone in that. A big proportion of 3-series owners due for a new car this year are currently on the waiting list for a 4-series, they told him. “Everyone wants one,” they said.

When our man sat down to talk turkey, BMW’s ‘product genius’ advised that he’d be waiting several months for delivery and, with interest in the car running so hot, he’d also be paying close to full price. So far, so rubbish the sales pitch.

But it didn’t end there. “If you’re not absolutely decided on a 420d, perhaps there’s something we can do to tempt you back towards a 3-series saloon,” the salesman said. ‘Something’ consisted of a £6000 manufacturer-funded deposit contribution on a 330d bought on finance, plus another £3000 off from the dealer – making the monthly payment on the six-cylinder BMW £40 less than he’d pay for a four-cylinder 420d Gran Coupé. Crikey, thought I, £9k off a five-star car is a very good advert indeed for taking delivery of a new BMW in September.

My friend, meanwhile, was in a right old pickle: wait for the newer, prettier 4-series and put up with the four-cylinder diesel engine – or get a new six-pot 3-series saloon in half the time, with more performance and more standard equipment, for less money a month? It was grunt versus grace, and desirability versus the discount.

His monthly saving would probably be more than offset against greater insurance and fuel costs for the 330d – but which car would give him the bigger buzz?

Being something of a brick, I volunteered to find out, imagining that this would be a straightforward choice, on behalf of a fairly low-mileage private buyer, of either 255bhp or 181bhp. Easy peasy. But with the two cars side by side in a Wiltshire car park, the complexity of the decision fully reveals itself.

This new 4-series is a handsome thing. It makes the 3-series look unexpectedly dumpy and awkward – all straight-sided from the rear end and ill-proportioned in profile.

The frameless doors, elegant roofline and eye-catching details of the 4-series all contribute to a much more appealing overall impression than the 3-series gives. Which is saying something considering that, to these eyes, a 3-series is still about the best-looking ‘normal’ compact exec you can buy.

On the inside, the cars are much less easily separated. To be frank, the 4-series’ cabin designers ought to have done more. The architecture, material richness and finish of both fascias are identical. You sit slightly lower in the 4-series and feel a touch more intimately cocooned by the nearer driver’s window and roofline, so the 4-series feels a bit more special, but not much.

In the back, the relative shortage of passenger space in the 420d is big enough to notice. And although the 4-series’ boot is easier to access, it’s slightly narrower and shorter than that of the 3-series. 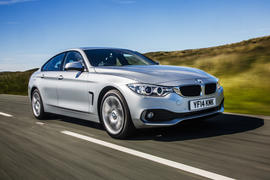 It’s not often that a road tester gets handed two cars as precisely matched as these to compare. Then again, all-BMW twin tests aren’t normally as interesting as those involving other brands as well. This one’s certainly not short of intrigue or subtlety, though.

BMW supplied our pair with matching xDrive four-wheel-drive sport automatic transmissions and similar adaptively damped M Sport suspension set-ups, in similar M Sport trims – even with identical alloy wheel sizes and tyres. And yet they are more different to drive than the gap between their respective engines and performance levels would suggest. And that, in itself, is a pretty big gap.

There are, of course, fundamental differences between a 3-series and a 4-series that account for some of the disparity between their driving experiences. Lower and wider of both body and axle tracks, the 4-series has its own chassis tuning, intended to convince you that it’s more spry and precise than its cheaper sibling. It works.

The Gran Coupé feels a shade more taut in its body control and crisp in its directional responses than the saloon. Although outright grip levels are as evenly matched as you’d expect and both cars have excellent cornering balance, the 4-series is just a little bit more eager and direct as you turn the steering wheel.

The 330d hits back because its surfeit of power and torque makes it more engaging once you’re settled in a corner, driving out. Simply put, a 420d doesn’t have the urge to feel characteristically rear driven when you want to have a bit of fun. A 330d does. Even in xDrive form, it’ll wiggle its rear end and take a poised, neutral attitude out of a bend under power.

In that microcosm, you could say that the 330d handles like a fully fledged BMW and the 420d doesn’t – although it’d be harsh on the 4-series to apply that generalisation more widely.

On steering feel, for example, the 4-series’ helm feels a tiny bit more fluent and connected at bumbling speeds, but both systems come alive as you load them with cornering forces, and both telegraph ebbing grip well enough.

Working against the 4-series is an occasionally nagging ride. On smooth A-roads and motorways, the 420d’s chassis flows between gentler dips and bumps well, but on B-roads it’s too firm. Even in Comfort mode on the adaptive suspension, it feels short on wheel travel and slightly aggressively damped.

The coarseness of the 420d’s engine, its relative lack of potency and that patchy ride contrast starkly with the 330d in all departments. It may not be that the 3-series’ 3.0-litre straight six is markedly quieter than the 420d’s four-pot, but it seems that way because it’s so much more smooth and suave.

On power delivery, the 330d is so much more flexible, as well as stronger absolutely everywhere, than the 420d. The 330d is every inch a distinguished premium product. And it’s a much more rounded, luxurious machine than the 4-series as well, thanks to a chassis that can be supple and forgiving at one moment and still stout and engaging the next.

So in the end, it is a straightforward choice: for me, for my mate, and for anyone smart enough to value true class over novelty value.

The 330d remains not just the very best BMW in the real world, but also one of the most complete new cars that money can buy. A 25 per cent discount on one is sale of the century stuff – and if you can get one, regardless of which other BMW the crowds may be queuing for at the time, you shouldn’t need asking twice.

A Mercedes C Class turbo diesel. More of a saloon than the BMW 3 Series, more coupe-ish than the 4 Series. Plus a much better looking dashboard.
hughfh 29 September 2014

The unheralded gem of the range

I got myself a factory order 335i back in June with a similar healthy discount - manual, rear wheel drive, singing six, real world 30 MPG and it is absolutely flipping fantastic. Do I look upon 20d or even 30d drivers with envy? Not even one little bit!!
jer 29 September 2014

Thought it was a pretty decent read

I'd always take the refinement of the 6. But I think the choices now are bound to put 3 sales under pressure, mainstream discounting? Why's everyone get so het up about a couple of possible inconsistencies and city tiger seems to be representing the car buying public now. Calm down or read something else.
scotty5 29 September 2014

jer wrote:But I think the

But I think the choices now are bound to put 3 sales under pressure, mainstream discounting?

The choices now put the 3 under pressure? Doubt very much if BMW are going to loose sleep which model their customers buy, as long as they keep buying BMW's. As for discounting, in my experience BMW have always entertained discounting, if they hadn't I wouldn't have bought them.
.

I'd always take the refinement of the 6. But I think the choices now are bound to put 3 sales under pressure, mainstream discounting? Why's everyone get so het up about a couple of possible inconsistencies and city tiger seems to be representing the car buying public now. Calm down or read something else.

Perhaps I do, no one especially a well respected publication should be recommending a diesel especially a very large one to someone who does very limited mileage, the saving is fuel will never compensate for the extra cost of the vehicle, servicing and repairs should it go wrong, and with the shift towards more efficient smaller capacity petrol turbos, and perhaps a ban or a charge on diesel engines entering city centres being implemented in the not to distant future, resale value may also be affected. Is a 6 cylinder high power diesel really the best option - I doubt it very much, unless you a clocking up big motorway mileage, its a false economy.