Citroën has released UK pricing and specification details of its new Nissan Qashqai-rivalling C5 Aircross ahead of it going on sale in December.

Available from £23,225 for the entry-level Feel edition, the C5 Aircross is equipped with an 8.0in touchscreen and 12.3in digital instrument display, wireless smartphone charging and Citroën’s new Progressive Hydraulic Cushion suspension system as standard on all models. A total of 20 driver assist systems are included, too. 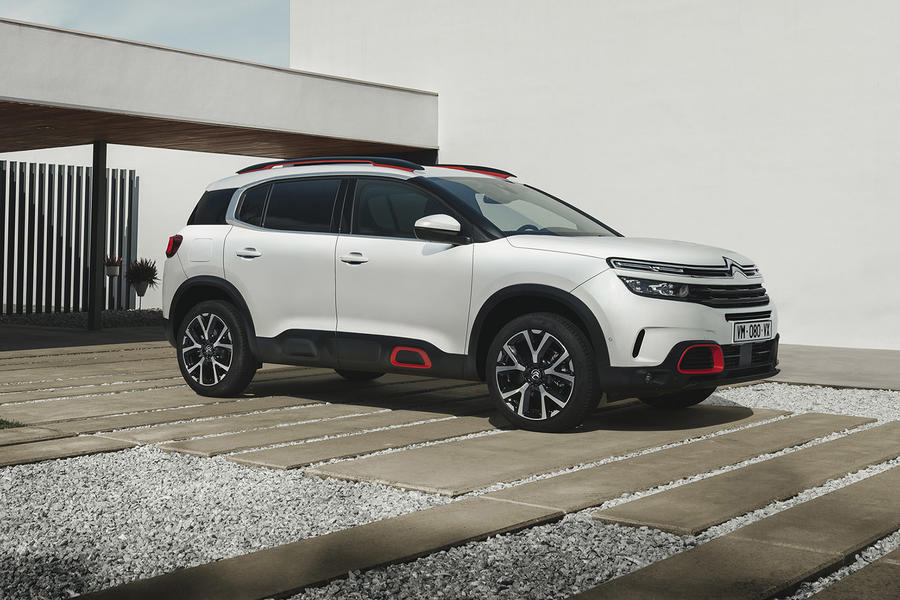 The Feel trim package comes with a 1.2-litre, three-cylinder Puretech petrol engine in entry-level form,  while a 1.5-litre BlueHDi diesel engine is available from £24,725. Both engines produce 128bhp. Buyers also have the option of a six-speed manual or eight-speed automatic gearbox.

Mid-level Flair trim starts at £25,325 with the manual gearbox, and automatic variants are an option from £28,425. A larger, 178bhp 2.0-litre diesel engine can be equipped from £30,325. Also available at this level is a contrasting black roof and a half-leather interior.

A 1.6-litre Puretech petrol engine, offering 181bhp, is an option for both Flair and Flair Plus models.

The range-topping Flair Plus can be equipped with all engines, with top-spec models costing £32,725.

With grey cloth interior fitted as standard to cars with the Feel trim package, Flair and Flair Plus models can be optioned with Brown Nappa leather seats, Alcantara seat backs, a two-tone leather steering wheel and a range of metallic and pearlescent exterior paint finishes. 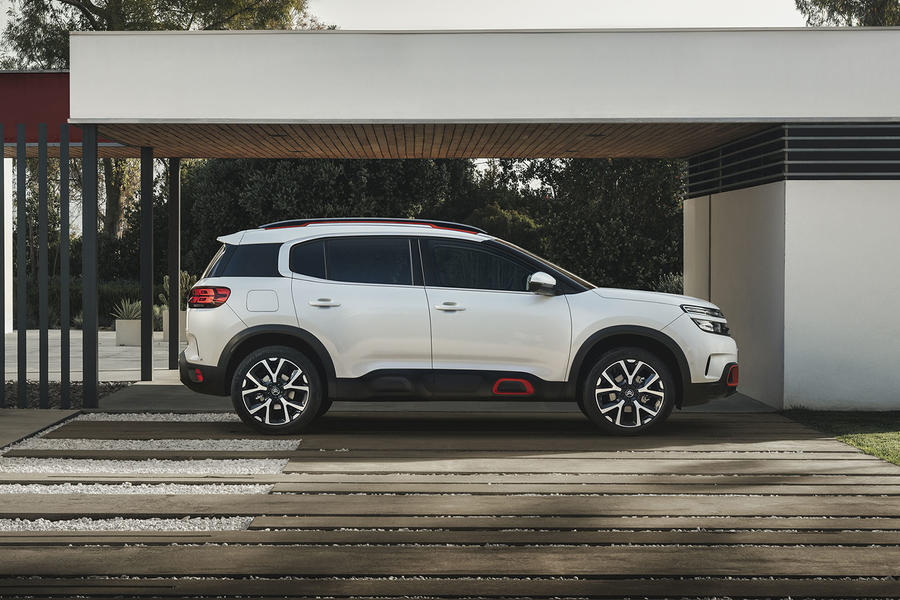 It is the second model to receive Citroën’s new rally-derived Progressive Hydraulic Cushion suspension system, following the C4 Cactus, which aims to deliver “peerless comfort” while retaining the relaxed characteristics of the company’s long-standing hydropneumatic system.

Opinion: focus on comfort is just what Citroen needs to stand out

The two-stage system has two hydraulic stops on either side, with one for compression and the other for rebound. According to Citroën, this results in “a magic carpet ride” even when driving over uneven ground. For major impacts, the hydraulic stops work with the spring and shock absorber to avoid jerky movement and unwanted bouncing.

Advanced Comfort upholstery, unique to the European-spec C5 Aircross, aims to further improve interior comfort with thicker, softer seat padding and greater adjustment. All three second-row seats are the same width, so the middle passenger has just as much room as the others.

Citroën head of product Xavier Peugeot said this will make the C5 Aircross "the most comfortable SUV on the market", bringing “an all-new level of overall comfort” to the segment.

The C5 Aircross, which is 4.5 metres long and 1.84m wide, is built on the same EMP2 platform as PSA group’s other SUVs, the Peugeot 3008 and DS 7 Crossback, but with a 2.73m wheelbase that makes it larger than both the Qashqai and Ateca.

This gives the C5 Aircross the largest storage capacity of any SUV in the segment, according to Citroën, with 580-720 litres with the second-row seats in place. All three rear seats slide, incline and fold flat to provide a total 1630 litres of storage.

The production version of the C5 Aircross has been toned down from the concept, with Citroën’s signature airbumps being much less prominent here than they are on the C4 Cactus.

It has a front grille inspired by the China-only C6 saloon and cuts down on the amount of plastic on show to appeal to a Chinese audience, but it keeps an element of the side protection that made the C4 Cactus stand out.

Citroën head of design Alexandre Malval described the C5 Aircross as “an asserted design” that will “enable it to seduce customers in every market around the world”.

It also continues the trend for expansive personalisation options first seen on the C3 Aircross and C4 Cactus, with seven body colours, a choice of 17in, 18in or 19in alloy wheels and three colour packs to add contrasting highlights to the front bumper, Airbump side panels and roof bars.

A plug-in hybrid variant, a first for any Citroën, due in early 2020. It will be the only 4x4 model in the range; the current petrol and diesel variants are two-wheel drive only, but they include Citroën’s Grip Control system to manage traction across Standard, Sand, Off-road, Snow and ESP Off modes.

All C5 Aircross variants will be built in Citroën’s Rennes-La Janais facility, with cars arriving at dealerships in late 2018. 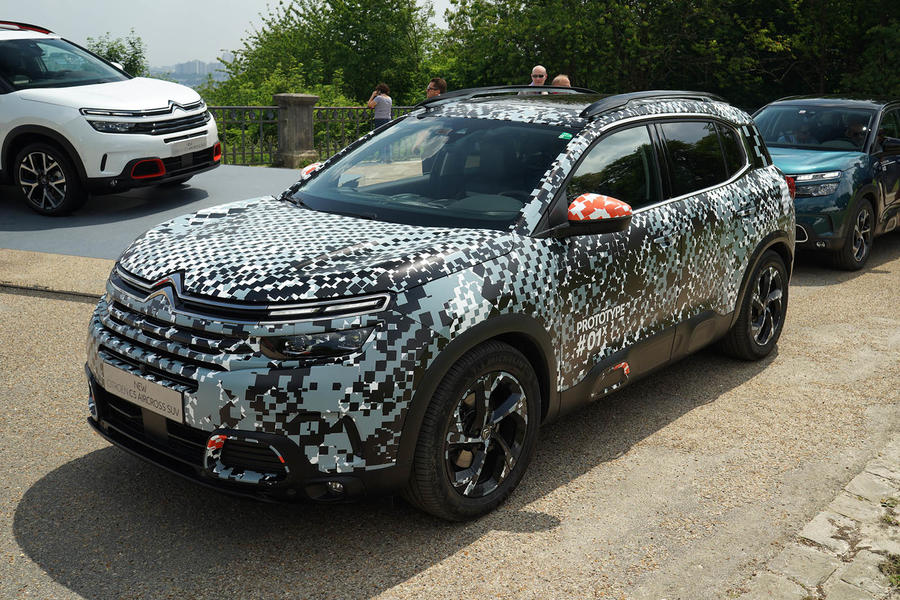 Behind the wheel of a C5 Aircross Prototype

We briefly drove the Aircross in prototype guise on a short, closed-course handling circuit comprised of smooth tarmac, cobbled roads and a fair few speed humps.

As with the C4 Cactus, it was impossible not to notice the extra padding in the Advanced Comfort seats as soon as we sat down: posterior-sinkingly soft at first, but with with sturdy side bolsters and plenty of under-thigh support.

On the move, the progressive hydraulic cushions helped the car glide over normal roads, with less vibration over rougher surfaces than traditional dampers. Unlike older Citroens, which were also renowned for their comfortable, floaty rides, the C5 isn’t upset by high-frequency bumps.

The system isn’t infallible, with speed bumps in particular still able to unsettle the ride, but for the most part it gives the C5 character unique amongst its peers.

Opinion: focus on comfort is just what Citroen needs to stand out

Sounds excellent, especially as a comfort oriented car. So who needs a DS then?

Quite so, given that the DS7

And the Vauxhall Grandland...and the Peugeot 5008.

Wrong. The DS7 is not built on the same platform, but that of the forthcoming 508.

I dont know if the use of the word platform ends up giving an impression that cars sharing the same platform are the same, but nothing can be further from the truth. This a case Same platform but different cars. From the definition of a platform being a set of common design, manufacture and assembly endeavours, it does not mean that each and every component is identical. For example, gearboxes made under same platform can have different torque capacities, different mountings, shapes, ratios and mountings. Same with every other component. Even within the same model, - if you take apart the outgoing Citroen C5 1.8 petrol and compare with a C5 V6 3.0hdi, the components will differ so radically that you'd almost conclude that they are two completely different cars bar similar body and interior - yet they are made in the same plant. I have had this experience with breaking and swapping Peugeot parts so I know.

Now on to the difference between the DS7 and the New C5, first of all, they are made in different plants - with the DS7 being made in the classier (in PSA standards) Mulhouse plant dedicated to big luxury models, while the C5 will most probably be made alongside the 3008 at Sochaux. In addition, the components definitely differ to offer far better technical package in the DS7. For example rear suspension in the DS7 is the multilink. Also the electronic architecture will be more advanced to accomodate advanced features like the night vision among many others.

the same type of people who

the same type of people who feel they need Citerons. Comfort, the only car that offers true, TRUE comfort is a RR in my opinion, their ride is unmatcthed, is my first choice for any long journeys.

the same type of people who feel they need Citerons. Comfort, the only car that offers true, TRUE comfort is a RR in my opinion, their ride is unmatcthed, is my first choice for any long journeys.

I hope that you, as a person (I assume) of discernment in motoring matters and a connoisseur of luxury cars, do not deny lesser mortals the chance to own a comfortable car like this Citroen.

where Citroen are coming from. "We've never even heard of the Nurburgring let alone tested there" and concentration on comfort and family rather than some dumb race-car inspired nonsense. It's a bit like the Volvo stance on safety and style over 0-60 bollox. BUT - does it have to be so fugly? Talk about a face only a mother could love!

I love the way airbumps get

I love the way airbumps get mentioned twiice in this article, whereas in reality they have been ditched altogether on this model. So many other SUvs have at least as much plastic cladding as this, just moulded in a different shape. But I like the look of this, maybe Citroen are going down the line of the Russian Doll approach now, but its a lot more interesting than the waste of time DS7.

More interesting than the DS7

This looks more interesting and better resolved than the DS7. Bit of an own goal for Citroen.